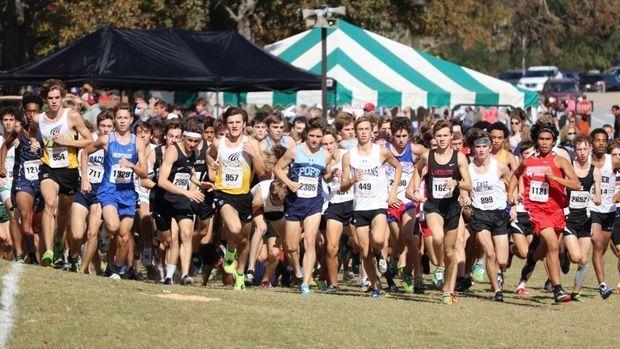 The start of the 6A boys race last year. Photo by Bruce Taylor

The top 20 last year at the Boys' 6A State Championship Race is going to see the departure of 10 Seniors to graduation. Which is the way it is supposed to happen if athletes and coaches are training to their peak going into that senior year. The 10 remaining out of that Top 20 is filled with some youth. 2 of those returners were freshman of out the South Georgia generated powerhouse teams of Richmond Hill and South Effingham. Tyler Phillips was a 9th grade for South Effingham placing 4th overall in the State Championships last year. His teammate Cailan Howard placed 5th will be a senior. South Effingham as a team placed runner-up to Cambridge last year scoring 117 to 108. Out of South Effingham's top 5 from last year, they only had one senior. South has already claimed an early season victory on opening weekend winning the Peach State Preview scoring only 29 points. Phillips and Howard also went 1-2 running 17:10.48 and 17:24.12.

Last year's Champions Cambridge didn't have but 2 runners in the top 20, starting at 18th place, but ran the way any Cross-Country team would want by placing their 5th runner at 25th. Cambridge will need to look to have younger runners to step up if they look to repeat. 4 out of those top 5 runners graduated.

Placing 3rd at the State Meet was Alexander, whose top runner was Kaden Harris. Kaden placed 11th at State XC will be returning for his senior year. Kaden narrowly missed qualifying for State in the 1600 in the spring running 4:27.35 at Sectionals. Alexander will be returning Leon Waine, Troy Waine, and Tyler Goode from last years Region team. Will the sophomore State Champion of the 800 be running XC for Robinson as well? Marcus Guidry will be entering his Junior year where he clocked an impressive 1:54.30 in the 800 at the Night of Champions this spring.

The host school of our State meet, Carrollton placed 5th last year. Carrollton had 2 runners place in the top ten at the Championships. Collin Jones will be moving on to Graduation. Junior Will Jennings placed 3rd but didn't seem to do well in track last spring. A runner was able to placed 3rd in cross, he failed to qualify in the 1600 or 3200 for State Track. Junior Liam Laney is the only other runner that is returning for the Trojans top 5 at State. Liam Laney has no results for track which would indicate he plays another sport in the spring. Carrollton did win 6A boys Track in the Spring. How much of a role will any of those athletes play for them in the fall?

A team that should never be overlooked is Pope High School. They placed 7th in the State Meet last year. You can definitely never overlook Cathi Monk's ability as a coach. Pope could return 6 out of their Top 7 from last year's State Championships. Pope had an impressive showing this weekend at the Into the Trail Invitational. Carter Spohn won the meet clocking 16:58.41. The meet had 13 teams and 119 finishers and Pope's #7 finished 21st overall.

But Pope lost by 2 points 36-38 to an Evans High School this weekend. Evans had last year's individual State Champion Jonathan Greene, but he has moved on to graduation. Evans placed 9th last year in the State Meet but looks much improved. This past weekend, Evans went 2, 3, 5, 10, & 16 to win the Into to the Trail Invitational. Evans was led by Sophomore Sawyer Cripps who ran 17:14.42 for 2nd. Close behind was Sophomore Glenn Graves running 17:15.10 for 3rd.

Chattahoochee High School placed 6th overall at the State Meet last season. Out of their Top 5 scorers at State last year will only be 2 returners, Junior Diego Santiago & Senior Daniel Keever. Daniel boasts 4:22.14 PR in the 1600 and 9:30.26 in the 3200 last spring.

It is very early and so much can change between now and November.