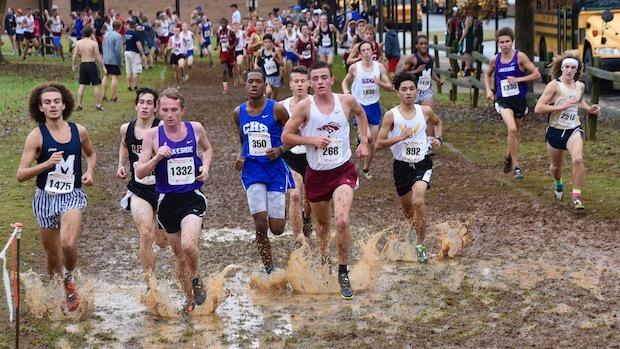 The lead pack at the 2015 state meet, the "mud year" in Carrollton. Photo by Dan McCauley

As far as I know, Webster hasn't officially defined "The Suck" in any of its latest issues. Still, if you will allow my arrogance - and from a cross country point of view - I'm going to take my best shot.

The Suck: Running hills in 90-degree heat, when you swear you're finished but the coach says you have three more minutes...A resounding gong coming from your alarm clock on a Saturday morning, and that realization once you remember what you're about to have to do...Long runs through dust and 97% humidity...Hoping the buses are at South Campus where you can leave on time, and wondering why you have to bow to the East, sacrifice animals, and/or kiss a turtle where they will all be there.

Then again, who kisses a turtle?

There's more, though now Mr. Webster is mad at me for going on: Speed workouts after a sleepless night studying, or texting...The coach telling you to 'pick it up' when you could swear you were already doing just that...Crossing the finish line and looking at your watch, and said watch not reading the time you wanted it to read...Hills, in general...Knowing it's your turn to carry the tent, or the tarp...Forgetting the med kit and/or losing the spike kit.

Enough about this, you've been there, you get the point, and probably have a few hundred more to add. Anyway, it's mid-August as I write this; fall weather isn't a thought in Mother Nature's head, so you will train on - temperatures somewhere set between bake and broil, and you will do so under a coach's watchful yet perhaps demented eyes.

Still, it is often said that you don't regret what you did, but more what you didn't do. Remembering back when I was a lad - and in all the sports I made a stab at - it was none other than running that gave me the best satisfaction.

Did I win? Quite frankly I don't remember. All I can recall is that I had no speed, strength, and no kick, but besides that, I was ready. But my coach made me embrace the suck and then some. And we ran through heat and dust and mud and muck and beyond. And we did quarters until we had our steps memorized. And one day I swore if he blew that whistle at me one more time, I was going to take that whistle out of his mouth and...

Perhaps I won't finish that sentence.

In moving on, though, sitting at the banquet was one of the most satisfied feelings - to this very day - I've ever had in my life, because it really is the hard that makes it great. And no matter what anyone tells you about runner's high, sometimes this sport really does...well...suck.

But in coming to my finish line, it's all about looking ahead to November - when Separation Slope has been successfully climbed in Carrollton and Georgia-Milesplit has tallied up the numbers. This is a team sport, yet it's so individual so much of the time. And yes, the saying 'you get out of it what you put into it' was perhaps invented for runners.

So, think ahead. How do you want to feel about yourself that night? Or when the coach is talking about you at the banquet? Your team might end up on the top rung of the podium or perform so poorly it was suggested you walk under it.

Because as I just said, this is a team sport, but, when you get right down to it, it comes down to the gut of each and every individual. And it is EXACTLY that persevered suck - in a perfect ratio with how much you went through it - that brings forth that big, satisfied, and well-deserved smile...