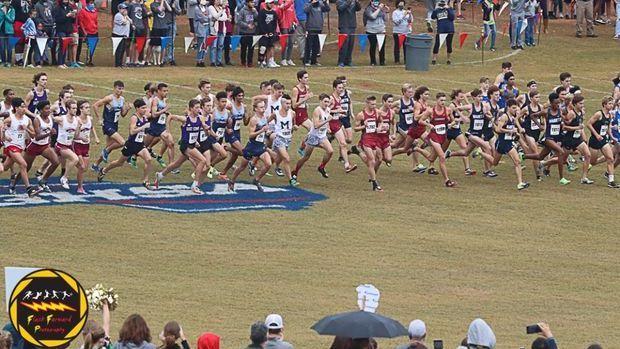 The start of the 2020 7A boys race that produced a thrilling finish with Marietta getting the win.

Before I start things off for the 2021 XC Season, please allow me to express my deep appreciation for what Bruce Taylor did for this sport and this website over multiple decades.  Bruce poured his heart and soul into Cross Country and Track, and nobody supported and covered coaches and athletes in Georgia like Bruce did.  I believe there is no better way to honor Bruce's memory than to do what he loved covering best:  Putting on those racing shoes, donning our school's colors, toeing the line (or grabbing a clipboard), and powering through what should be an exciting season.  Rest in Peace, Bruce.  This preview is for you.

We once again enter the Cross Country season under uncertain times.  We cannot escape the polarizing world we live in as it surrounds our every move.  What we can do, though, is prepare.  We can't predict what tomorrow will bring, but we can and need to prepare for tomorrow.  These kids deserve our best laid plans, and it's time to see what all those summer miles have led to.

What I've done here is used two main metrics:  returning runners' 2020 Cross Country PRs and returning runners' 2021 Track 1600m PRs.  While neither is perfect, both offer enough data to give me 15 boys' teams and 15 girls' team to highlight.  Some teams have already gotten underway while others await this Saturday or beyond, so in the spirit of fairness, I will only mention what we know exiting last school year.  And away we go!

Foreword:  This year is incredibly wide open as many, many teams lost kids to graduation.  A couple teams have two stud returners who will be featured first, but there isn't anyone returning 5 superstars as we've had in the past.  The 7A podium chase is always fun, but this year could be one of the less predictable years we've had.

Marietta:  Raise your hand if you're surprised to see Marietta mentioned among the elite.  That's what I figured... no hands.  The defending State Champions are at it again.  Marietta's top 2 are obvious studs in James May and Jared Fortenberry.  May took 5th at State XC and was top 10 in both the 1600m and 3200m.  Fortenberry was top 6 in both the 1600m and 3200m and placed 18th in State XC.  Lots of senior talent graduated last year though which, combined with what I'm sure were great summers, catapults them to not just the top on their team but the top of 7A.  Both must be considered individual contenders for the title, and having a strong 1-2 punch is a great way to get things started at Carrollton.  Cade Mayfield almost broke 16:00 post-season and focused most of his attention on the 800 in Track while Hines Doyle nearly broke 10:00 in Track.  They'll need a 5th to emerge (possibly Jack Baltz who went 4:46 in the Spring?) in order to get the job done, but Marietta is always a dangerous team in November.  This squad is no different.

Mill Creek:  The Hawks of MC Baby had a solid showing at State last year placing 2 in the top 15 with both returning in Ethan Nordman and Jake Peters.  The experienced Nordman broke 15:30 at RunningLane to end his XC season and then followed it up with a solid Track campaign where he made the State Finals in the 1600m and 3200m.  Teammate Peters saw his Track season end in March, but assuming he's back and ready to roll, Mill Creek's 1-2 punch is only a baby step behind Marietta's.  Where Mill Creek is dangerous though is depth.  Joseph Kim, and Shahzeb Rashid had strong track seasons, and XC newcomer Luke Kalarickal nearly broke 4:40 in the 1600m in Track.  Keep an eye on Christie's Crew as they eye a top finishing spot in November.

Lambert:  While it's no secret that Lambert graduated some top tier talent last year, it's also no secret that they're always a team to take seriously at Carrollton.  They return three guys in Calvin Stilwell, Reid Latimer, and JT Pentland who all broke 16:20 at Coach Wood last year, so if those three can pack up like that and Lambert can get a 1-2-3 punch in the chute all in the top 15-25 in Carrollton, that becomes a punch in the face to anyone trying to contend.  Matthew Miller and Hayden Nicholason both broke 4:45 in Track which offers up some depth.  It's usually like this, but it seems especially this year that the top 30 to top 60 gap at Carrollton could be incredibly small after looking at these metrics.

Harrison:  What a treat we were given last year with the Harrison Hoyas.  Lots of talent from last year's runners up have graduated though, but the good news for the Hoyas is they are repackaged with some strong returners.  Similar to Lambert, Harrison returns three runners who broke 16:20 last year in Andrew Cole, Mark Ravenscraft, and Kaden McVey (who actually broke 16:00 2 years ago).  Add in a strong #4 in William Laine who almost broke 10:00 in the Spring with Sterling Sellier and Jack Sisk who broke 4:45?  Harrison could possibly be the deepest in the field, but they'll need one of those top 3 to emerge into the Top 10 to do some damage at the top.

Roswell:  The Roswell Hornets are a bit of a "new kid on the block" but could be hitting their stride (or flight?  Buzz?  Sorry...) in 2021.  Led by a pair of Christians, Christian Jimenez and Christian Cartier both placed in the top 30 at State last year.  Jimenez posted 4:34/9:41 in the Spring while Cartier went 4:40/2:03.  Adam Clark and Thomas Rhodes both broke 4:40 in the Spring which gives Roswell a pretty strong looking pack.  Add in their #3 and #4 from last year's squad in Matthew Brunner and Will Uhlmeyer, and Roswell could perhaps argue that they're among the deepest teams in 7A.  Watch out for this exciting looking team throughout the Fall.

West Forsyth:  West won't appear on anyone's radar if they're only looking at last year's Cross Country season.  These guys really, really began to emerge in Track though.  Trent Bell is the returning stud of the bunch capping off his junior year Track season with 4:22/9:33 showings.  Aidan Murray's 4:29/10:01 Track season stands out along with a 4:38/10:22 showing from Cole Schmoyer.  Diego Fernandes, Aidan Portelli, and Parker Chase also offer up depth to this squad with all having run 4:46 or quicker in the Spring.  Many of these kids only ran 18s and slower in XC but popped off in the Spring with Will Conner being the lone exception without a Track season yet nearly broke 17:00 in XC.  West may be the biggest wildcard in the deck.

Etowah:  Another squad with an impressive Track season was Etowah as they scored big points in the inaugural 4x800m at State.  They return a bunch of talent from last year led by Dru Moore who was 25th at State XC yet 7th in the 3200m in the Spring going 9:16.  Matthew Hall's 4:36/10:02 Spring was an impressive improvement.  Hall and teammate Andrew Balogh were top 60 at Carrollton making them another squad who returns many from last year's State squad.  Ryan Berwald and Seth Eye went 4:45 and 4:47 in the Spring as well to offer up some depth.

Denmark:  The magic these guys showed last year won't soon be forgotten, but they did graduate a bunch of talent.  They do still return three studs in Ethan Ashley, Tavian Anderson, and Xavier Anderson, all of whom went 16:00 or faster in the Fall.  Ashley is the obvious stud here as a returning top 10 State XC finisher which was followed up by a 4:15/9:03 Spring - making him the likely individual favorite.  The Andersons make this squad have a nasty 1-2-3 punch, but after that, they'll really need some help.  They don't have another sub 18:00 5K nor a sub 5:00 1600m returner which means huge points at State.  This is a well-coached team though, and whispers of a freshman stud or 2 coming in could shoot them up the board.

Gainesville:  Gainesville is a squad who has been making some noise over the last year or 2, and now they have 5 returners who have all gone 17:05 or faster entering the 2021 XC season.  John Jessup (4:34 / 16:21) leads the charge with a strong supporting cast in Danial Gallagher, George Henry Ewers, David Islas, and Aiden Ayala.  Track wasn't quite as indicative of the Red Elephants' potential, but this is a surefire top 10 team threat.

Walton:  New coach Erin Gallagher inherits a team similar to Gainesville in that they've got 5 returners who have run 17:04 or faster yet lack the star power up front.  Kenyele Brown posted a 16:50 at Coach Wood last year while Brick Conway's career PR is from 2 years ago at 16:33.  Joseph Minecci's 4:48/10:18 double appears to be the strongest track season from a squad who had a stronger XC season, yet the Vestavia Hills newcomer knows how to prep her teams, so it'll be fun to watch the Raiders under new leadership and see how they progress.

Parkview:  The Panthers graduated a decent amount of talent last year but had a strong Track season to show that they're a Top 10 threat once again with decent upside for more.  Caden Hall leads the way as he returns following a 10th place finish in Carrollton along with a 4:25 / 9:24 Track campaign.  Martin Robles (4:38), David Garcia (4:43) and Jack Holcomb (4:44/10:10) offer up a decent supporting cast, but they'll need a 5th to emerge in order to find themselves in a higher finishing position come November.

North Gwinnett:  John Rowland and Chris Carter unite to form one of the best 1-2 coaching punches in Georgia, and their boys' squad definitely has some promise.  Yannis Pothoulakis is also a stud Tennis player, but his 32nd place finish in Carrollton shows he runs the hills well.  He will be joined by fellow sub-17:00 runner Will Collett and then 2 more low 17s guys in Cole Hambacker and Matthew Drane who also broke 4:50 in the Spring.  The ever-important 5th man can be a factor here though, but North seems to boast a little bit a depth, and with another great coaching mind on the staff, these guys could catch some by surprise.

The Individual Chase:  Many of the athletes gunning for the individual title have been mentioned here already.  You've got your obvious top returners from last year's Carrollton battle in James May (Marietta, 5th overall), Ethan Ashley (Denmark, 6th overall), Nate Verska (South Forsyth, 9th overall), Caden Hall (Parkview, 10th overall), Ethan Nordman and Jake Peters (Mill Creek, 14th and 15th overall), Houston Hamby (East Coweta, 16th overall), and Jared Fortenberry (Marietta, 18th overall).  But we also simply cannot ignore a stud who caught us all by surprise in the spring, and that is Alex Arrambide of North Forsyth (edit - possibly at East Forsyth now?) who went 4:18/9:17 seemingly out of nowhere.  Two other surefire contenders are Dru Moore of Etowah and Trent Bell of West Forsyth who ran 4:20 and 4:22 in the Spring which were 5th and 7th best among the 7A stallions last year, so they can't be forgotten about.  There are always Fall surprises, too, but my bet is the majority of the Top 10 on the boys' side resides in this paragraph.