Loading
This year's Central Ga Relays had many of central/south Georgia's top runners from 22 schools competing at the highest level. The hot spot to be in  Macon Saturday was at Thompson Stadium on the new, beautifully resurfaced track. The stands were packed, the races were  crowd pleasers (especially in the relays. The day  flowed along smoothly for a non-Metro event, with results on MileSplit quickly. With over 2300 people watching the meet LIVE, this years Central Georgia Relays is considered one of the most successful track meets in south of metro ATL.

Veterans High School Girls edged out Baldwin HS to win the Championship Trophy by 1 point...92 - 91. It came all the way down to the final event of the day, the 4x400 relay.. Where local school Veterans, won the title, by racing to 2nd place, overtaking Baldwin out of Milledgeville, who finished 4th. 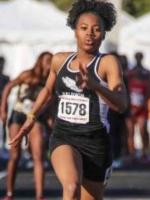 The High Point Winner on the girls side was Baldwin state hopeful Brittany Trawick with 30 points. Trawick led Baldwin by sweeping the horizontal jumps, going 18-7 in the LJ, 36-6.50 in the TJ and took 2nd in the 100m . Chastity Pickett from Westover (Albany) earned a MileSplitElite performance in the 300h going 46.43.

On the Boys side Peach County High School came from behind to beat New Hampstead in the final 3 races by 8 points (65-57) to claim the title. The High Point Trophy winner for the Boys was Peach County's Cameron Blake with 22.5 points. Blake swept the hurdles events by first clocking a 15.86 in the 110h, then later took the 300h going 40.59.

In addition to the high level of completion on the track, there were 2 scholarships given out to a male and female, that have demonstrated what it means to be a student-athlete. Destiny Green, of New Hampstead and Noah Howard of Southwest Macon, High School each won a $100 scholarship, in part by Chick-Fil-A & Apparel Authority.

Also, several state champion alumni of the Central Ga Relays came back to support this great event, including:  Zykerria Williams, Adriunna Brown, Tamdra Lawrence, Zoe Jordan, Annasterasia Terrell, Desiree Blunt, and Jatavious Harris. The presence of Milesplit Ga also helped make the atmosphere of this meet a Championship one, even with the state basketball championships being played across town in Macon.