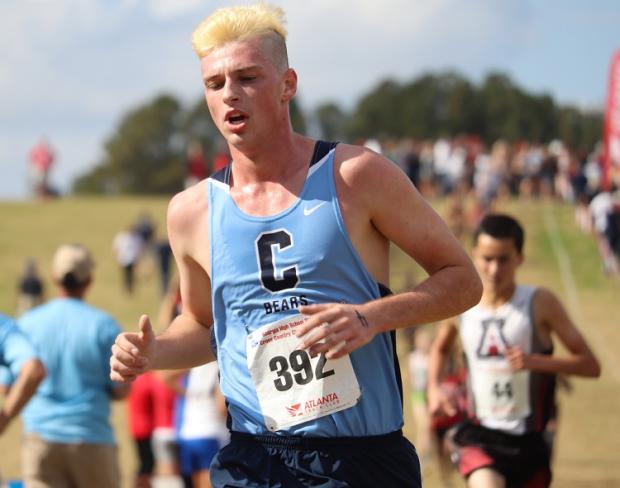 Cambridge Boys finally caught up and passed Pope at Carrollton Saturday, peakin timely fashion winning their first school XC State title in the short history of the school. Jack Filan took the reigns early for the Bears, setting the tone for the 2-5 guys to stay together and do their jobs, which they certainly did, besting the #1 ranked Greyhounds by 29 points. Sr. Chris Anderson had a big race, placing 8th Overall at 16:59, while Anders Law took 12th in 17:10. 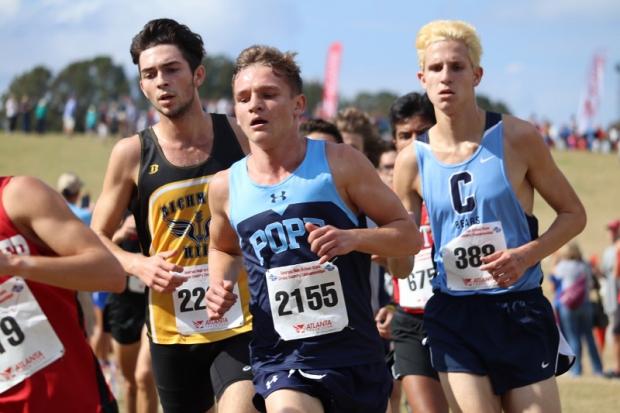 Pope hung around though, and had a solid enough race to ascend the team Podium next. Sr. Jacob Brenneman led the Hounds' efforts placing 7th Overall in 16:55 making the All-State team. 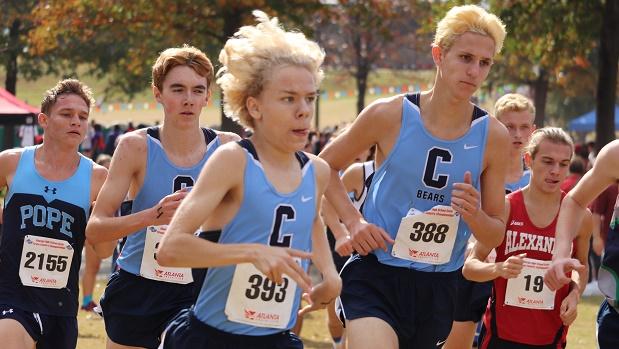 Cambridge packs it in early heading to the back of the course. 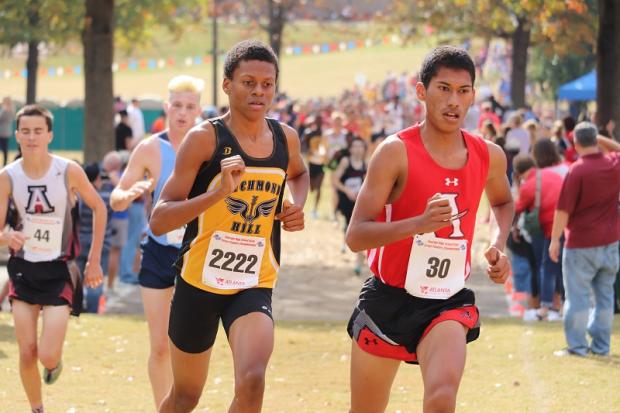 Jalen Murray of Richmond Hill and Adrian Hernandez dueled the entirety of Loop 1.

When your school is located on the far east side of Georgia, their are not many hills to train on. But, rising program Richmond Hill found somewhere to do hill repeats, as they surged to a 3rd place team finish Saturday. Jalen Murray was in the lead for much of the race, and stayed in the mix long enough to score 5th overall at 16:38. 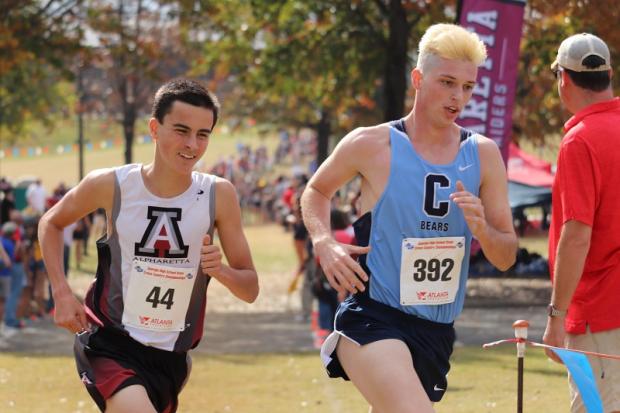 Robert Chappell of Alpharetta and Jack Filan face off after the street crossings on Loop 1. 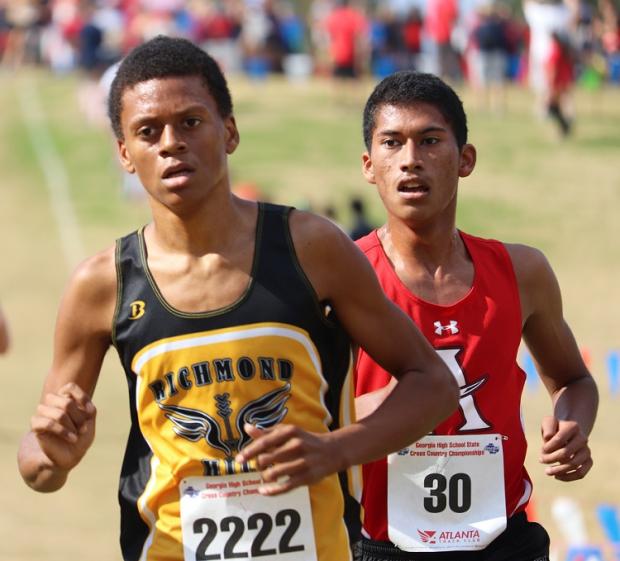 The Individual race seemed to be more a strategic one for Overall Champ Adrian Hernandez from Allatoona. Looking at pics, he pretty much sat on Murray of Richmond Hill until he was ready make his move. Which he did somewhere on Loop 2, and held his ground until crossing the mats for the Individual Championship in 16:26. Rounding out the top 10 Individuals (not on Podium teams) were Robert Chappell of Alpharetta 4th in 16:38, Mark White of Lakeside Evans 9th at 17:01 and Mugisha Beinvenu from Gainesville HS going 17:07. 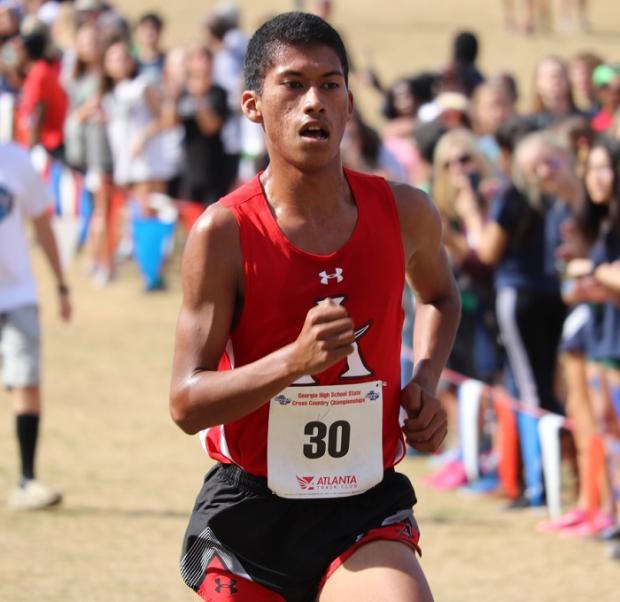 Adrian Hernandez had enough fuel in the tank to outlast the field taking the Overall win. 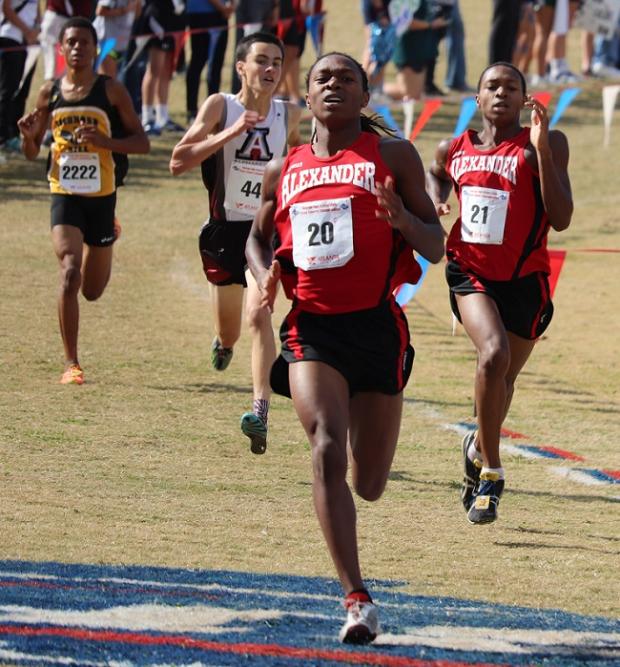 Koi Williams (20) and Mekhi Williams of Alexander swept the 2-3 spots for All-State recognition.

Alexander had a great finish by top runners Koi Williams and Mekhi Williams to pull themselves into the 4th and final team Podium spot for AAAAAA. Koi and Mekhi blazed down the final hill, rounded the last bend as Koi took individual runnerup clocking a 16:34 and Mekhi 16:36 besting Harrison by 6 points.