Another Great day of exciting racing at MS State Championships 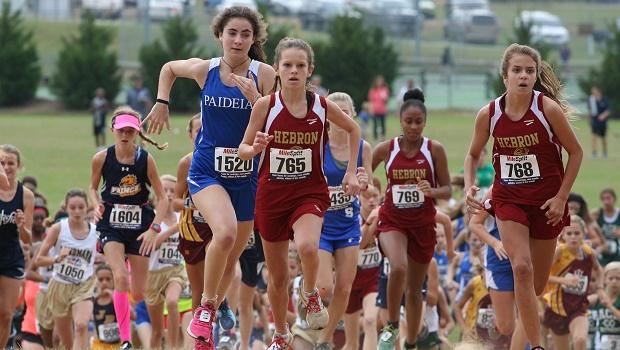 Hebron Christian gets out in the Small School Girls race, with Paideia's Tatum Vaccaro charging hard

Thousands of parents, fans, runners and coaches made the yearly trek down to Cochran. Athletes actually had pretty good conditions until after 1pm, when it began to heat up, but it was not unbearable, like many days the past month. Before noon, it was cooler than expected with a slight breeze and mostly cloudy. Bleckley County, once again did an outstanding job of hosting the meet on all ends, as the meet went off without a hitch and ran on time like it always has. The awards were also something to behold, and cherish,  with many trophies over 3 feet tall! and medals to the top 25 individuals in each race.

The Large Schools got the Championship races underway at 9:30am after the Large JV races were completed. Sam Rich and Mark Ravenscraft dueled thru the Mile 1, but Rich began to separate on Mile 2, winning comfortably in 11:15. Richmond Hill (out of Augusta) has a thriving XC program behind HS Coach, Levi Sybert,  with their HS Boys ranked in the top 10 in AAAAA. They should continue to improve in the next few years too, as their MS Boys team won the Large School title scoring 71 points. Their top runner was Justice Quiller, who placed 10th at 12:01. Sam Rich (unattached) was the Overall Champ posting the 2nd fastest time of the day in 11:15. 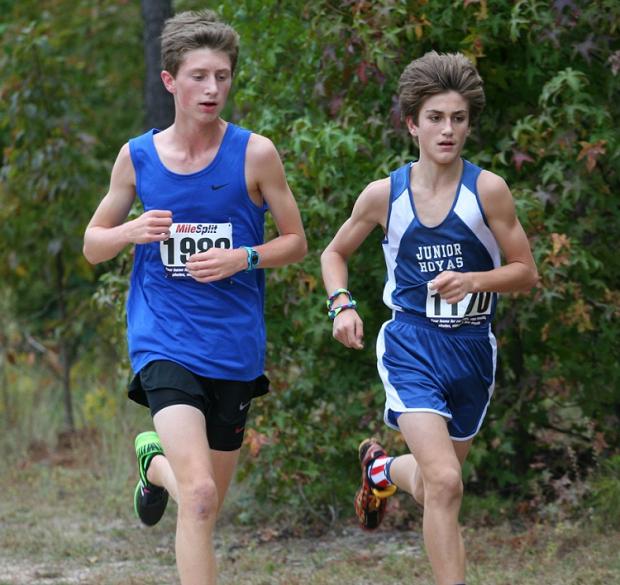 Champion Sam Rich (L) and Mark Ravenscraft duel on the beginning of the backside of the course. 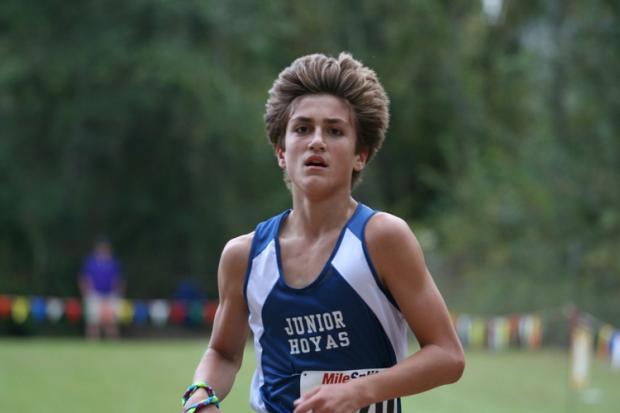 Ravenscraft of the Jr Hoyas, hung tough for 2nd place though posting a 11:25. 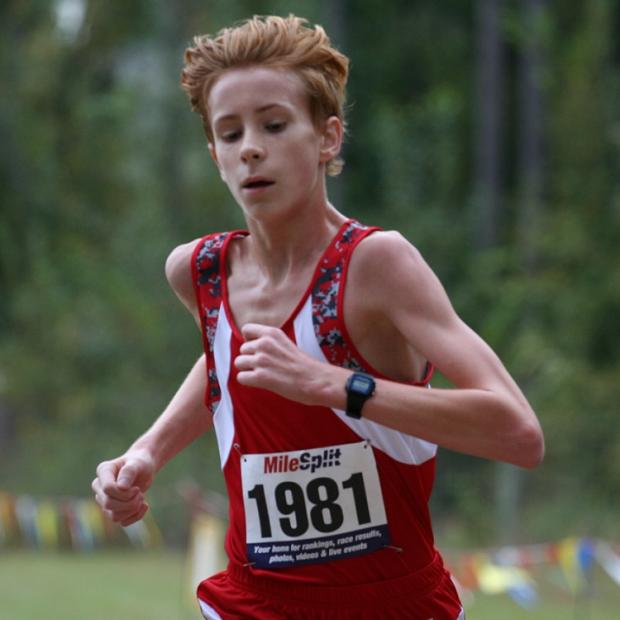 Steven McCartney of McConnell MS in Gwinnett County picked it up on Mile 2 taking 3rd Overall in 11:41

Woodland MS Euharlee got some payback this Saturday, after finishing 2nd in 2016. Their HS program (ranked in the top 10 All-Classes most of the season) should be anticipating getting more talent for next Fall from this squad. Woodland Euharlee had a 44 point margin of victory over 2nd place Dean Rusk MS. Leading the way for them was Overall Champ Rylee Evans, who raced to the fastest Girls time of the meet at 12:23! Clara Heppner (unattached) ran well and battled with Evans nearly the entire race clocking a 12:30 for runnerup honors.

Large School Girls make their way up the starting hill 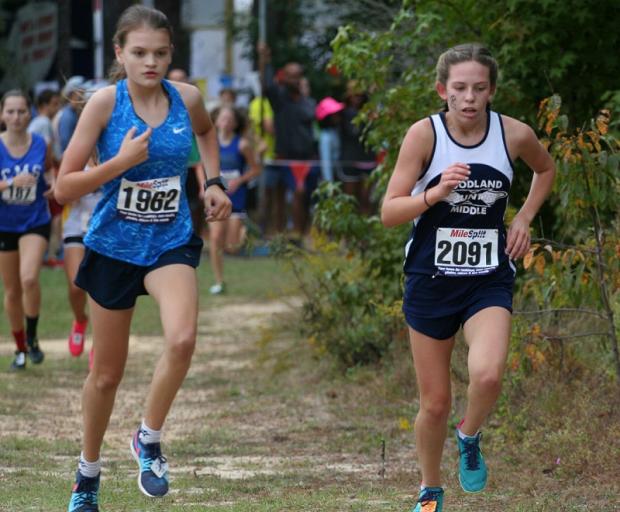 Clara Heppner and Rylee Evans go head to head after the 'crossroads' area towards the backside. 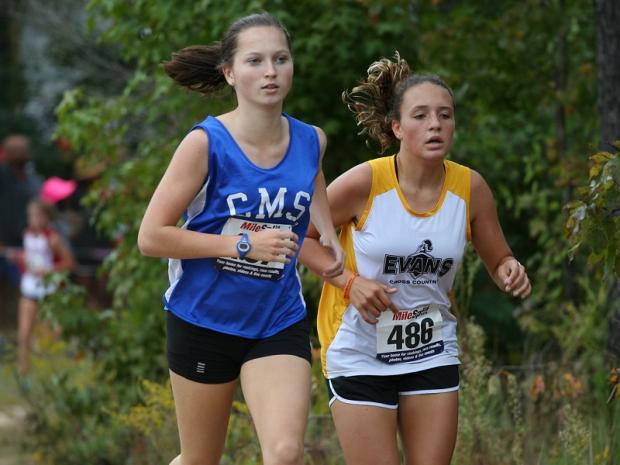 Oglethorpe County defended their 2016 Small School title, by besting Small School perennial power Holy Innocents by 18 points. The Patriots would have been undefeated this Fall, if not for coming out on the wrong end of a 6th runner tiebreak to Large School champ Richmond Hill at the Braves Invitational last week. Luke McGarity has been untouchable this Fall and he continued that streak by winning the Overall title for the Pats' going 11:36. Also key, were Zachary Frankel placing 6th (12:11) and Chayton Tuck 7th (12:16) Holy Innocents Golden Bears were paced by Brandon Sertl who took 3rd place in 11:54. 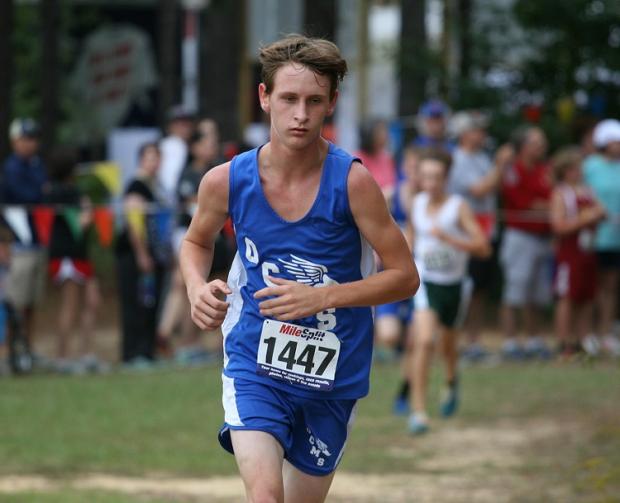 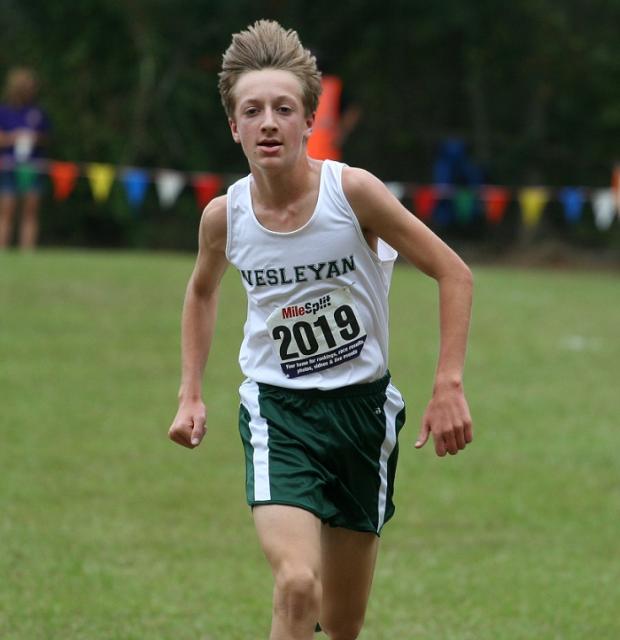 Stafford McDaniel of Wesleyan had a great race taking 2nd in 11:42 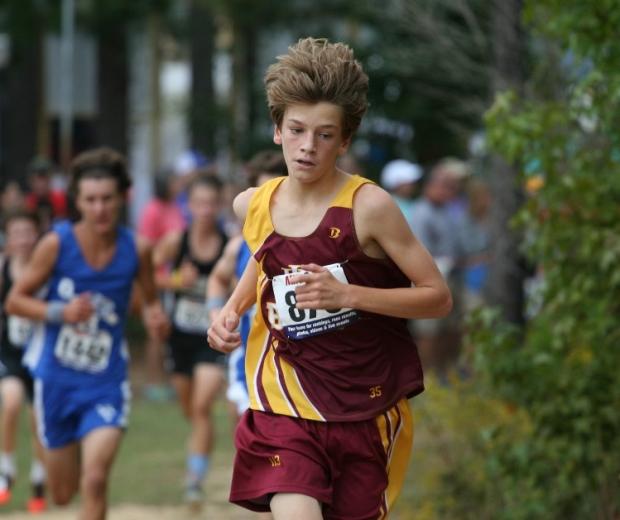 Brandon Sertl from Holy Innocents was 3rd Overall in 11:54

Holy Innocents made it look easy in the Small School Girls race, defending their title, placng 4 girls in the top 20, for a team average of 13:45. The Golden Bears margin of victory was 57 points over 2nd place Landmark Christian. Making the All-State squad, with top 10 finishes were Reese Neumann (4th-13:14) and Reese Martin (6th-13:35) Brooke Browning from Hebron Chritian has been impressive all Fall, and she capped off the season by winning the Overall title in 12:47. Paideia's Tatum Vaccaro  (Soccer player) discovered XC this Fall, and had a great first season of running, placing 2nd Overall at 13:05. Maggie Jones led Landmark to a 2nd place team finish taking 3rd Overall at 13:08. Host school Bleckley MS was 3rd as a team! 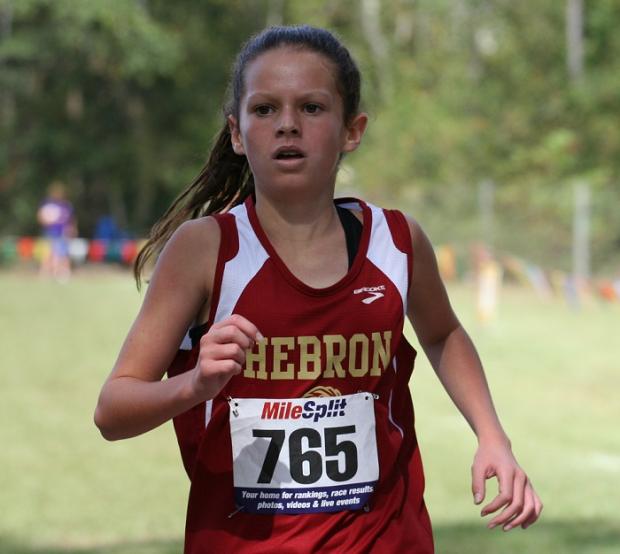 Brooke Browning was laser focused the entire race, winning the Individual title in 12:47. 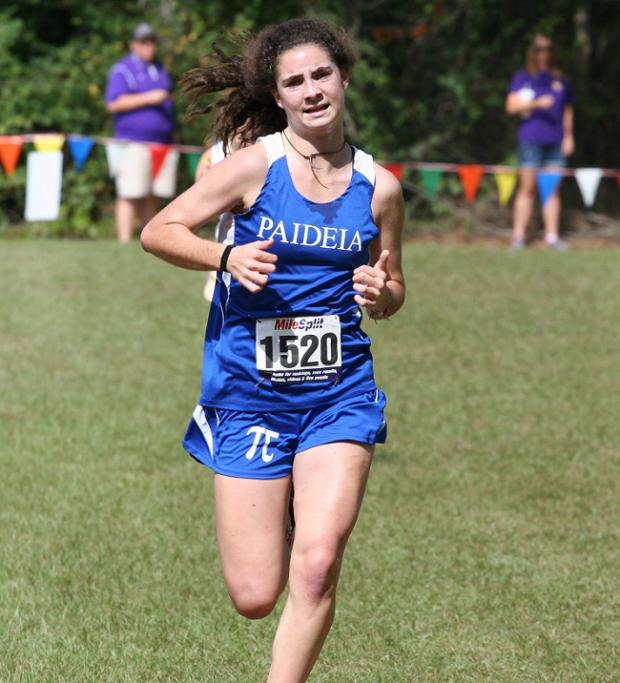 Tatum Vaccaro was unsure about her chances before the race, but answered the bell placing 2nd in 13:05. 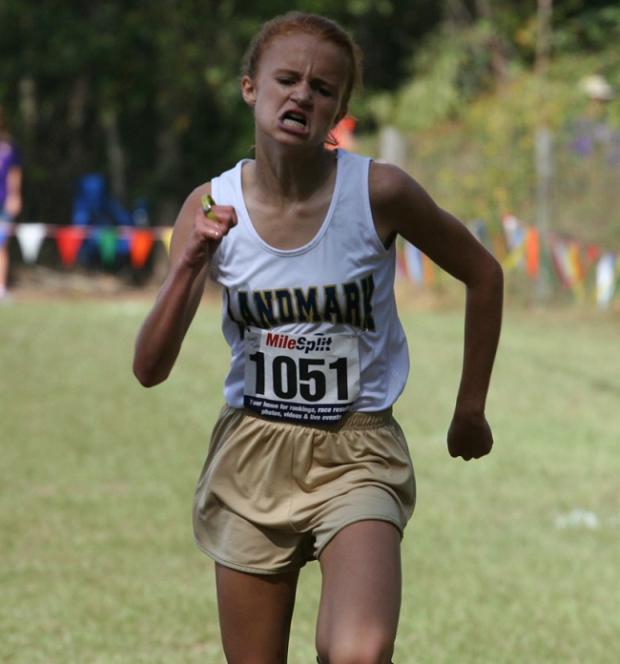 In the hottest temps all day for Boys races, Zachary Bobak from Pickens County thrived, and set a new MS course record of 11:13. It did not come easy though, as William Kellam from West Laurens pushed him to the limit (Kellam had the 3rd fastest time of the day at 11:17) Pace Academy was definitely on their game, as the Knights won by 44 points over 2nd place Westminster (ATL) The Blaha brothers led the charge for Pace with Edward taking 3rd in 11:37 and George 5th at 11:57. Also in the top 10 for the Knights was Robert Mallis in 7th at 12:08. Truman Thompson of St. Martin's placed 4th Overall going 11:49. 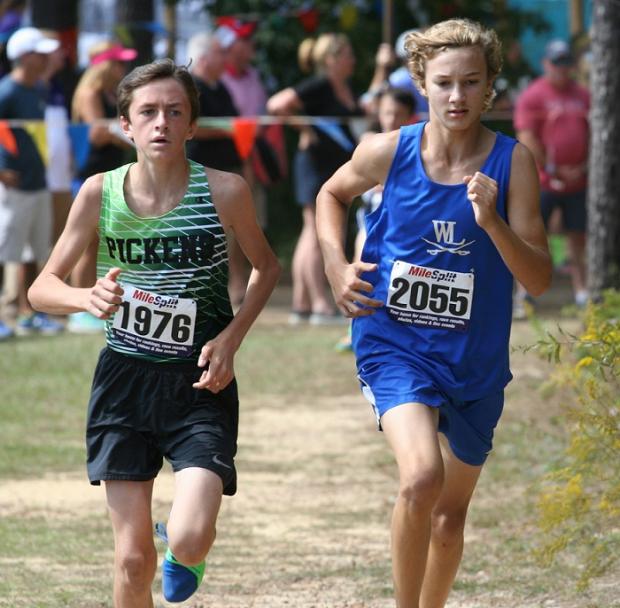 Zachary Bobak and William Kellam battled each other from start to finish. 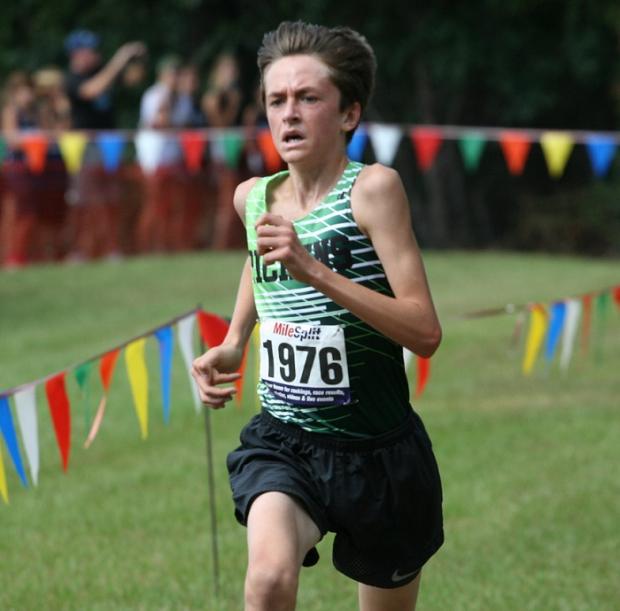 Bobak heads to the mats, recording the best Boys time of the meet in 11:13. 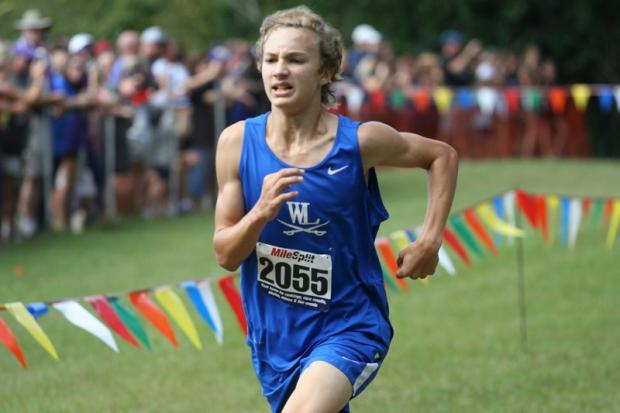 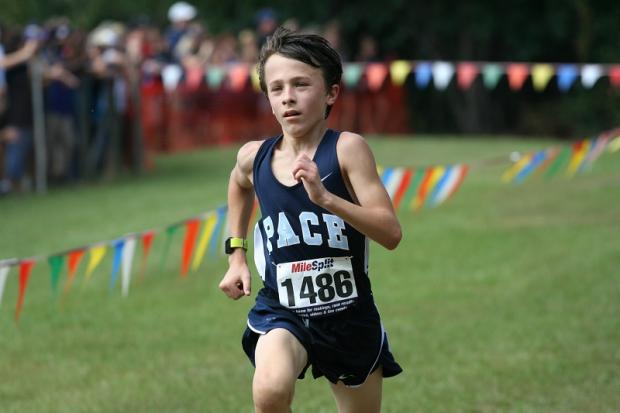 Marist won Medium School team title by 51 points, avenging a 5 point loss to Pace in 2016. It was strangley similar to watching their HS squads finish at GHSA State, as their gals sprinted up the finish hill passing runners enroute to the timing mats. Leading the War Eagles, were Johna Grisik in 5th at 13:31 and Emily Delmonte 6th at 13:32. Also in the top 10, were Lily Murray 8th, and Kate Selover 9th. Westminster edged 2016 champ Pace by 5 points for team runnerup honors. Funny thing, I helped Sydney Matthews' mom register 3 girls as Individuals, and told her the race was wide open, it seems Sydney used that to her advantage, as she owned Mile 2, earning the Medium School Girls Individual title clocking a 12:43. Placing 2nd as an Individual was Sarah Burnette (unattached) at 12:51, followed by Janie Cooper of Westminster at 12:54. 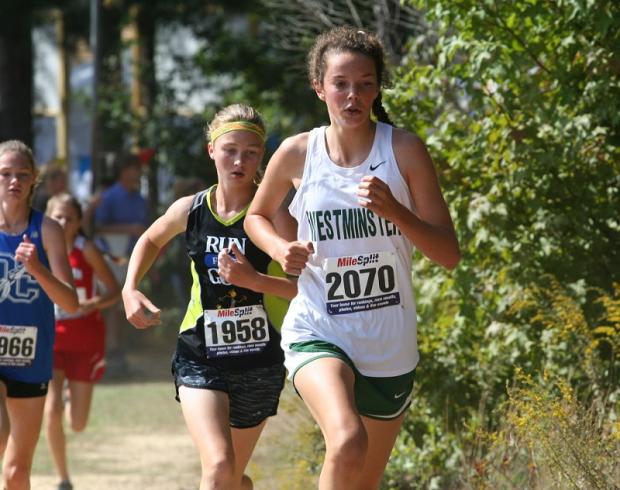 Jamie Cooper of Westminster leads Sarah Burnette heading into the tough backside of the new layout. 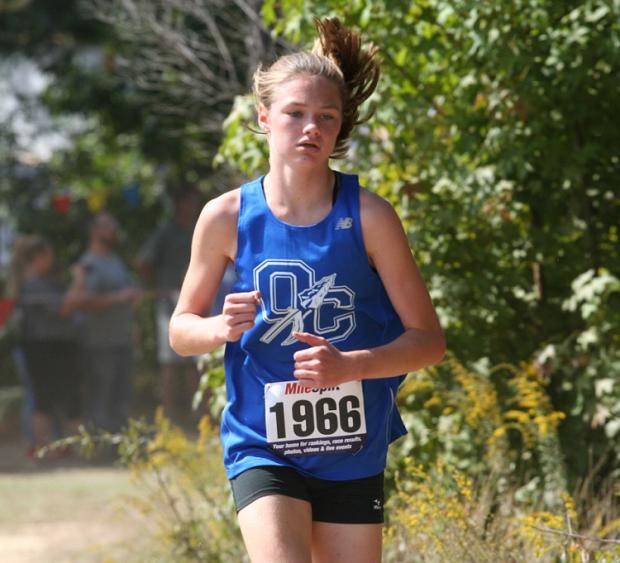 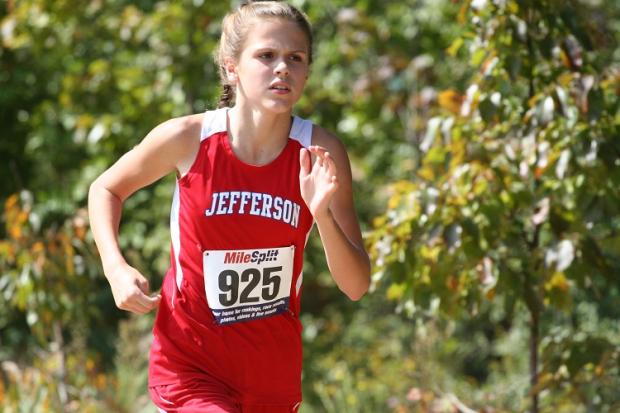 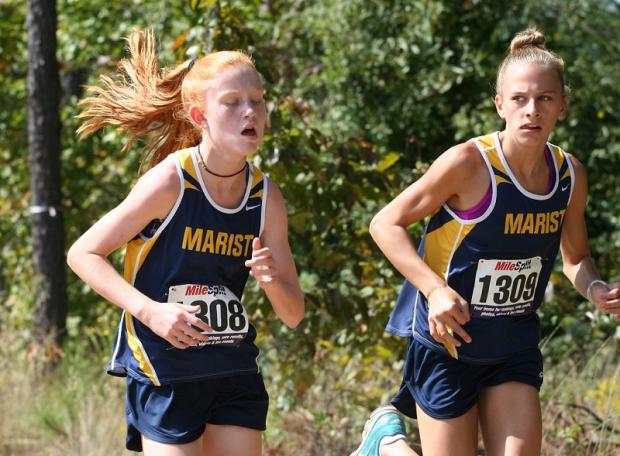 Emily Delmonte and Johna Grisik of Marist work in tandem leading Marist back to the Medium School title.