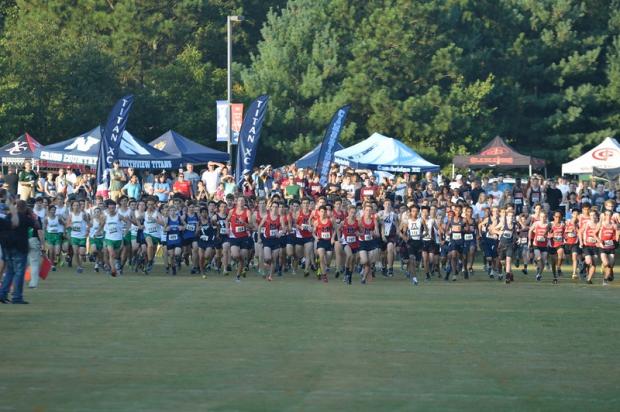 The Fulton County Cross Country Championships will be held for the sixth consecutive year at Milton HS beginning at 7:45am. Varsity races are at 10:15am (girls) & 10:45am (boys). 14 schools are slated to compete for team and all-around best program awards on one of the state's most difficult courses.

The host Lady Eagles of Milton, (ranked 4th-All-Class) come into the championships fresh off a runner-up finish to USA 12th ranked Blacksburg (VA) last weekend at Knight's Crossing Invite in Salem, VA besting 29 schools.  Running without their #3 runner, Milton's still ran a 33-second spread over their top-5 finishers and a 19:48 average and are the team to beat.

Cross-town rival Cambridge (ranked 3rd-AAAAAA) is coming off their first big invitational win besting 13 schools in winning the Covered Bridge Invite in Roswell.  Placing all their scoring runners in the top-17 finishers was a convincing showing and with their 20:03 avg at Early Bird Invite 3 weeks ago, should contend for a podium spot.

Also in the hunt will be the Lady Titans of Blessed Trinity (ranked 2nd in AAAA). The Roswell-based school is coming off an 8th place finish at the Berry College Invite and has not raced in 2 weeks. A solid 20:51 team avg & very small 47-second spread among their top-5 puts them squarely in the hunt for a team trophy.

Milton again looks to be holding all the cards, the Eagles (ranked 18th in USA) are coming off a 154-point win and besting 30 schools at the Knight's Crossing Invite in Salem, VA. Milton's 15:34 avg & 50-second spread are looking to capture their 6th-straight boy's title.

The battle for 2nd should be a good one with much-improved Cambridge (ranked 2nd-AAAAAA) coming off a big win at the Covered Bridge Invite in Roswell last week and a solid 16:33 avg at the Early Bird Invite taking 3rd place 3 weeks ago.

Blessed Trinity (ranked 3rd-AAAAA) will challenge the Bears for runner-up honors.  The Titans finished a very strong 3rd at the Berry Invitational 2 weeks ago with a 17:09 avg and only a 1:06 spread among their scoring 5-runners.

Others to watch: Northview (ranked 9th in AAAAAA, 17:35 avg at Covered Bridge), Alpharetta (ranked 3rd in AAAAAA) but not running a full varsity team.

With the late scratch of both Landmark Christian & Paideia, the individual race for the title should be a good one. Milton sophomore Abby Rindt, winner of their team's time trial in August on this same course has the fastest season time coming in and has run a 21:06 on her home course at last year's county meet. Challenging will be Milton junior Taylor Cushman who has a better overall PR than Rindt but has a course best of 21:15.  Johns Creek senior Allison Rothrock has a 22:05 course best from her freshman year but has run 2 seconds faster than Cushman & 2 seconds slower than Rindt this season. Cambridge sophomore Ashley Sechrest has also run within 6-seconds of Rindt this season and should not be counted out. The darkhorse could be Sarika Temme-Bapat of Northview. The Titan senior has run 20:47 on the course, back in 2014 and will be running her 4th race over the slow & technical course making her a solid contender just based on experience alone.  Don't be surprised if you see Milton senior Annie Gallagher contending as well. The last time Gallagher ran the county meet she won the JV race in 2015 and this will be her 7th race-effort on the Milton layout.

There should be a lot of red in the front group as the host Eagles have defending 7A state champion Sam Bowers going for his 2nd Fulton County title. The Milton senior destroyed his own course record at the team's time trial one month ago going 16:39 besting the 17:07 course record set at 2016 Fulton meet. Bowers will have company as his senior teammate Nicholas Yanek will be right there to contend for the win. Yanek has run 16:46 on the course, which bested Bowers previous record by 21-seconds. Bowers and Yanek have run the fastest times in the state this season, 15:00 & 15:01 and Bowers is coming off a thrilling meet win at Knights Crossing besting 3 state champions from Virginia & West Virginia. Yanek was third at the same meet, only 14-seconds behind Bowers. Milton seniors Michael Malkowski (2nd in 2016, 17:13 course best), Dru Milton (17:41 course best) & Ryan Beitzell (17:34 course best) will be in the hunt as well.  Non-Milton contenders include Cambridge junior Jack Filan (18:15 course best), Alpharetta's Robert Chappell* (17:36 course best) & Northview senior Michael Smith (17:43 course best). *-not confirmed is competing.