It was another 2 days of great action at this season's version of the Coaches Invitational at Lakewood Stadium. Although a rain shower passed thru Saturday, 139 MileSplit 2nd Team Elite Performances were also achieved in competitive Track and Field Events action.

Remember when 12-0 or even 12-6 was a "great" jump in GA? Not anymore! Georgia HS Girls have reached new heights in the Pole Vault as 3 Ladies have cleared 13-0 this season now bringing talk of a "Golden Age' for GA Girls PV. Courtney Long of Allatoona joined that club in rare air as she went 13-0, winning the competition over NB Indoors Nats, #2 Carson Dingler and #3 Becky Arbiv. Like Matt Barry stated on the Discussion Board, "This is absolutely the "Golden Age" of the Girls' Pole Vault. The girls pole vault was an exhibition event in 2001 with the first state meet in 2002. Since those days, the vault has exploded" 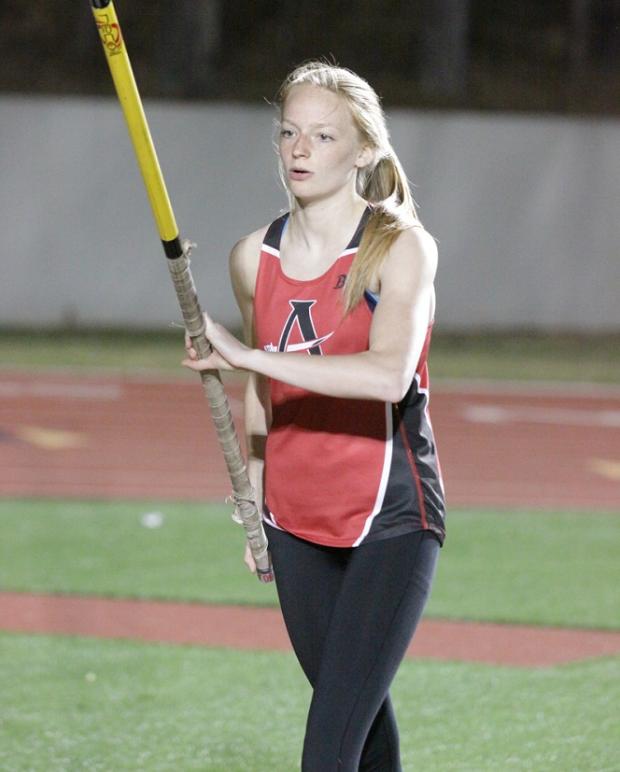 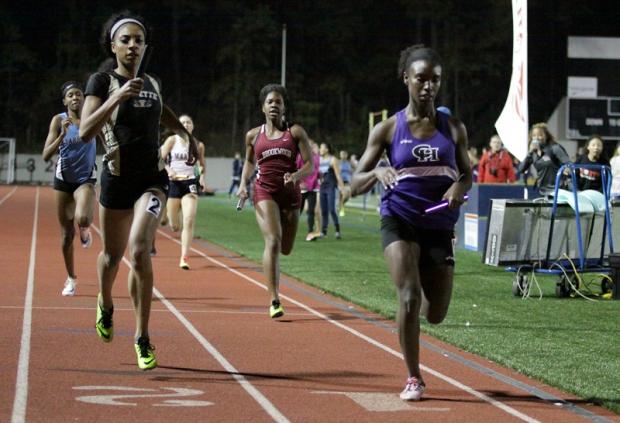 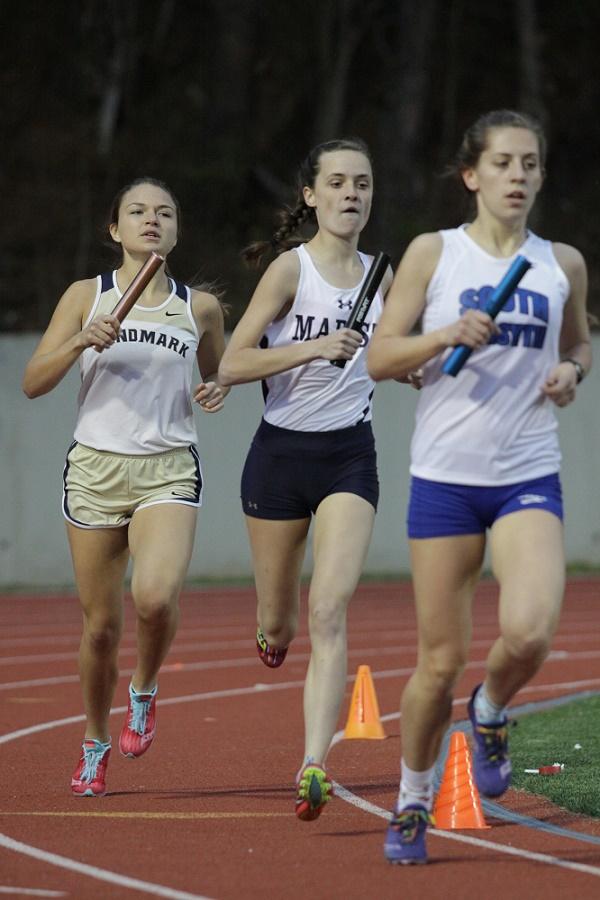 What an incredible battle in the Girls 4x1600 Relay between Landmark Christian, Marist and South Forsyth. These 3 squads duked it out the whole way with Marist taking the win at 21:01, over South at 21:05 and Landmark 21:08. All of these times will crack the Girls All-Time Top 10 list on GATFXCCA.ORG 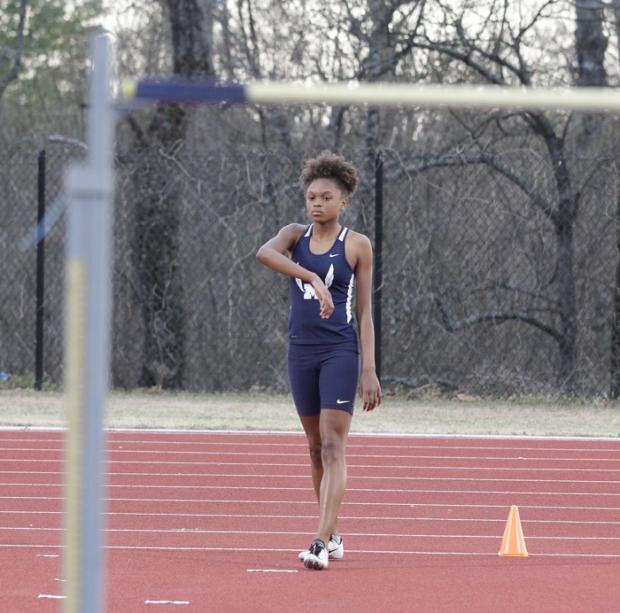 Sterling Lester of Marietta HS eyes the bar at 5-6, as she wins the HJ competion. 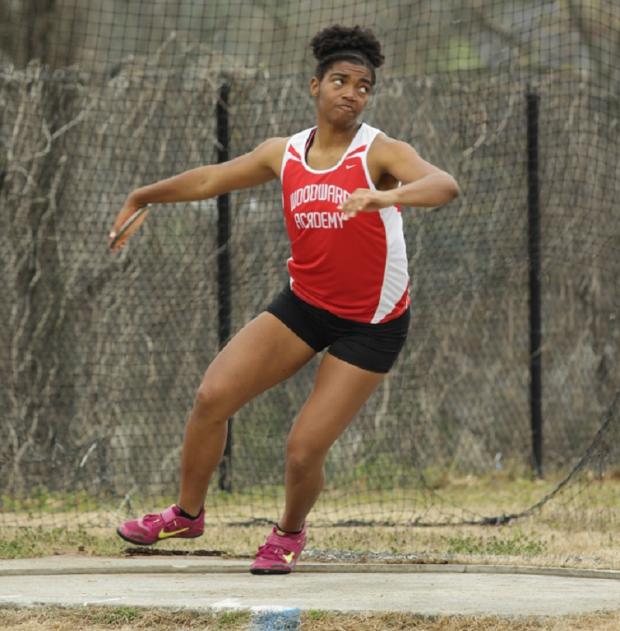 Makenli Forrest of Woodward is shown here unleashing another bomb to win the Discus.  Forrest made it a clean sweep of Throws taking the Shot with a MileSplit GA #1 throw of 46-9.25 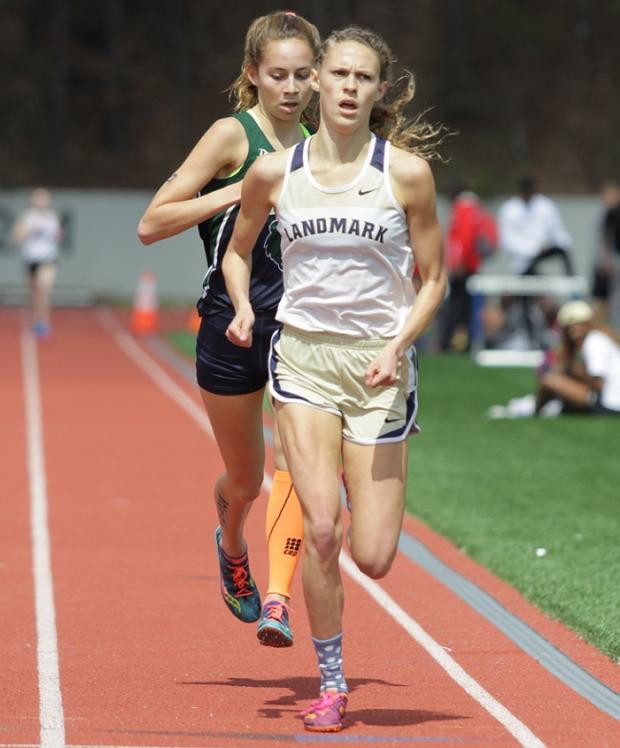 Nicole Fegans and Super Frosh Nyah Hernandez dueled to the wire in the Girls 3200m race with the Foot Locker National XC All American taking the win by .34 at 10:36.66. Hernandez ran a great race, and may well be the next "Sheriff in Town" after Nicole moves on to college. But, Fegans ran a brave race, after having put in a leg on Landmark's 4x1600 squad Friday nite. 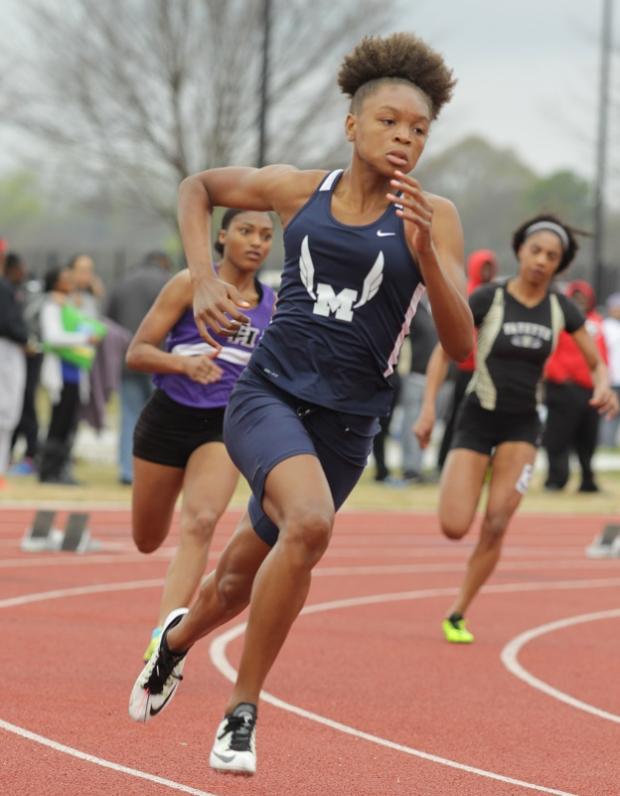 Hope Glenn of Pope takes another win in the 100m dash, crossing the finish line at 11.68. 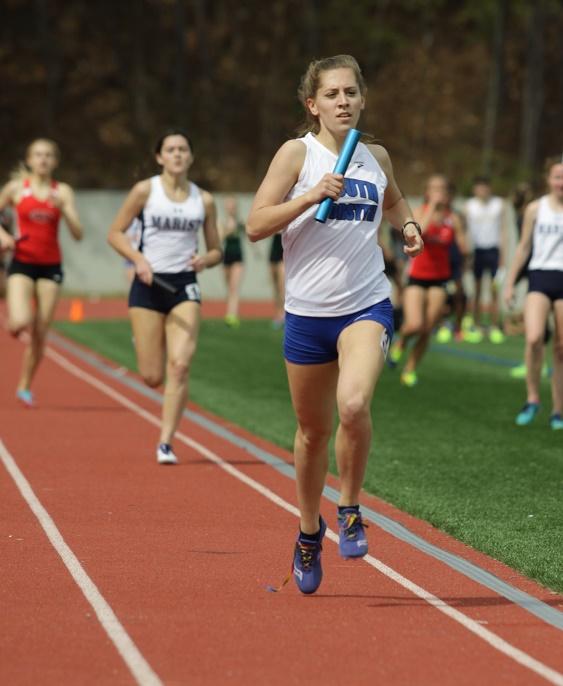 Georgia HS Boys also were heating up the Track and infield as 8 MileSplit GA #1 Outdoor marks were achieved Friday night and Saturday. Though not a team competition, Parkview, Alexander, Arabia Mountain, Fayette County and Archer had big days and have thus emerged as contenders to win a State Championship Cup. Every relay race is worth a watch from the RACE ACTION. 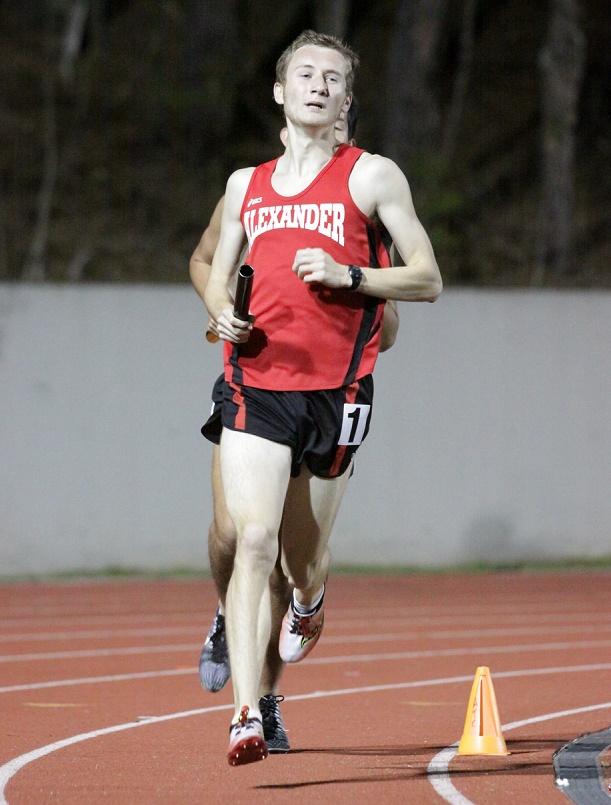 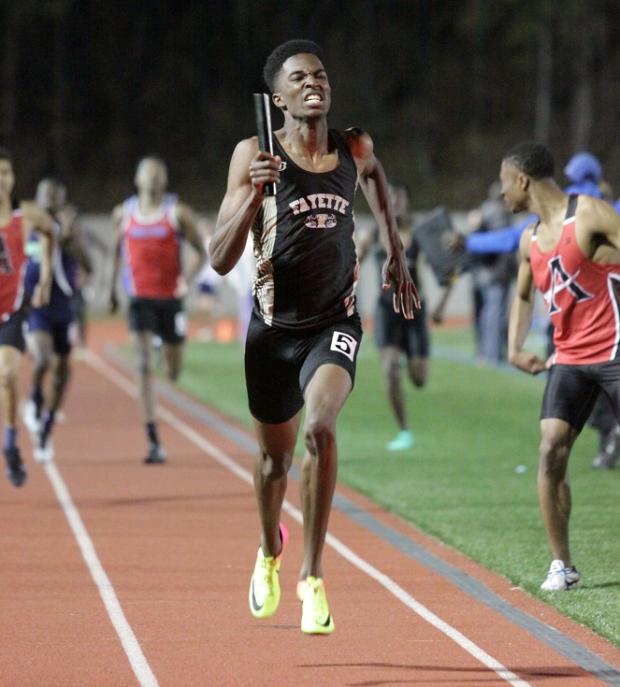 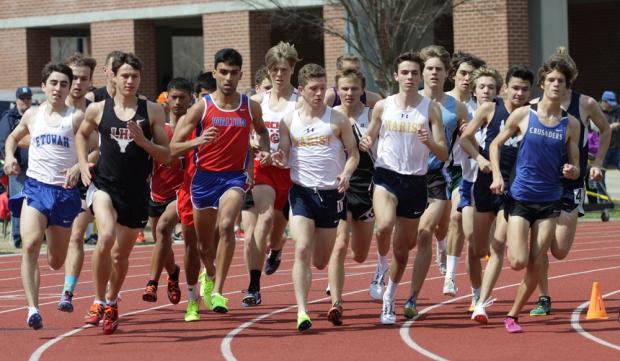 Elite distance aces jostle for position early in the Boys 3200, as Foot Locker Nats All-American Jacob McLeod (R in blue) made it 2 9:09s in as many weeks, taking the win over NXN National Finalist, Hayden Tullos of Marist at 9:17. Everett Smulders of Lovett had a breakout race taking 3rd in 9:27 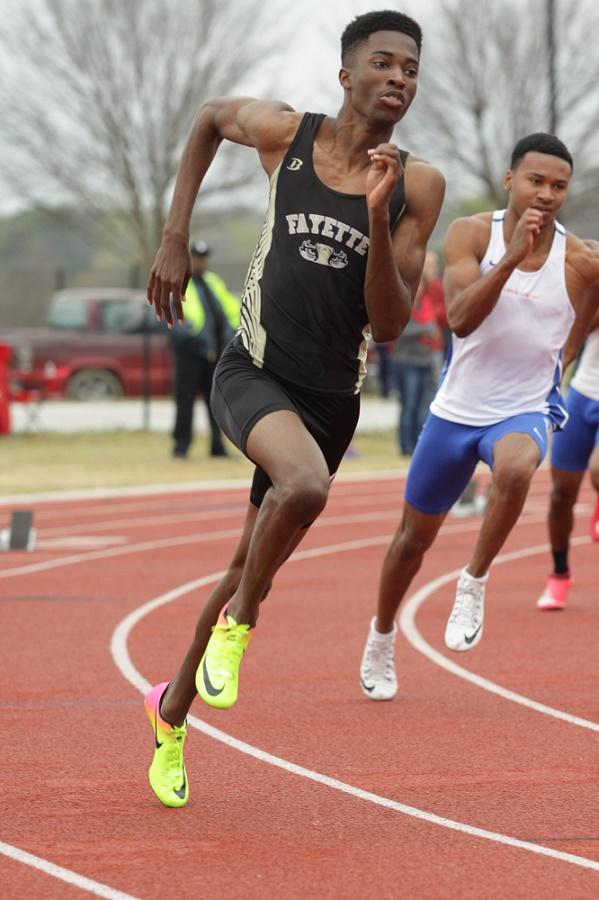 It doesn't get much closer than this in the 100m dash as Demarius Smith of Parkview  outleaned Daniel Robinson of Archer going 10.66 to Robinson's 10.67... 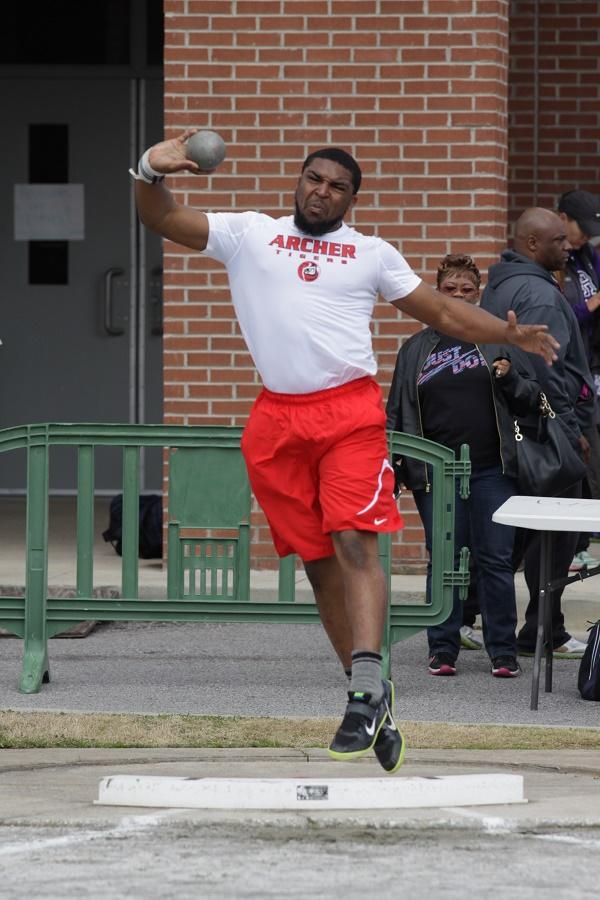 Sam Wright of Archer is shown here launching MileSplit GA bomb of 62-10.25 to win the competition.Wright has a pr of 64-2.50. Michael Willingham of Arabia Mountain flung the Discus 171-0 for the #1 mark in that event. 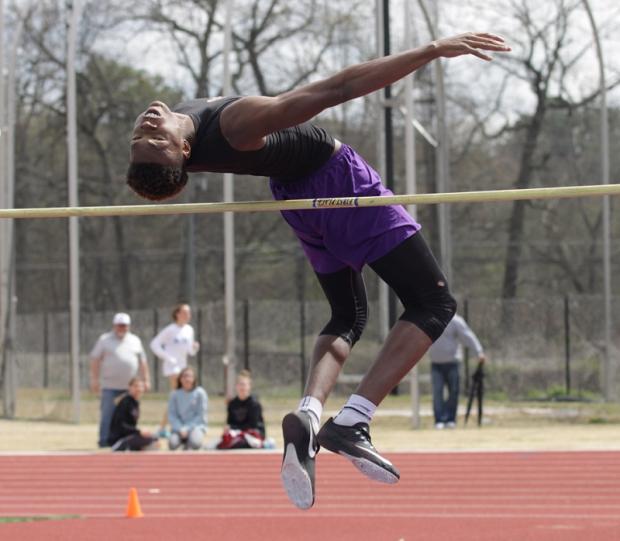 Torenio Davis made the trip up from Bleckley County and won the HJ competition with a bar of 6-6. The Royal also boasts the top mark in the Rankings with a clearance of 6-10.50 from a meet last week. Keep an eye out for this young man as he could join the 7-00 club soon. He is also is a very good basketball player and great dunker, and I don't mean donuts... 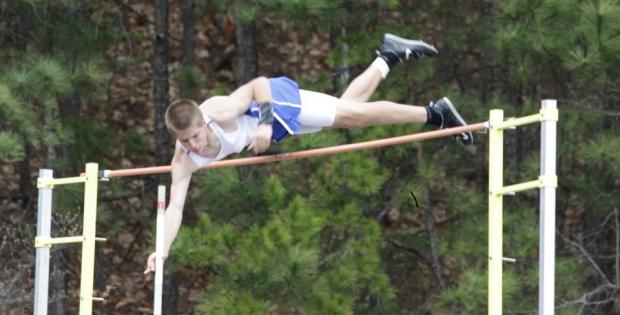 Brian Hauch of Parkview  won the PV competition at Lakewood Saturday having a pr of 14-9.25