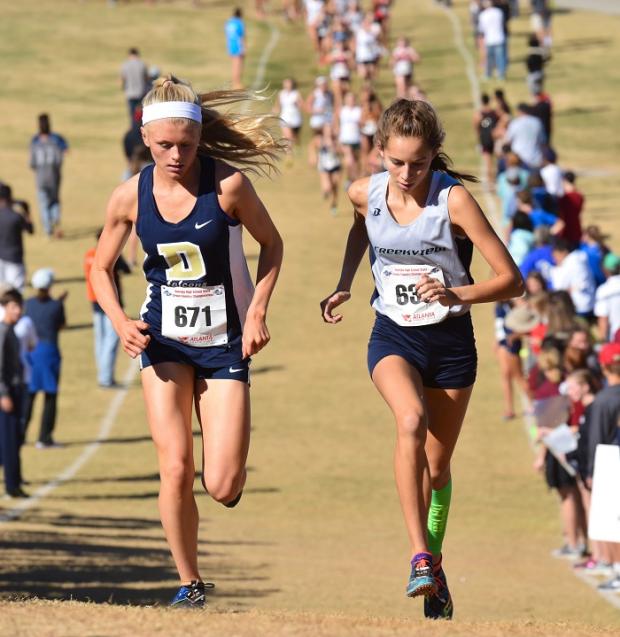 Skylar English of Dacula and Nyah Hernandez climbing the backside of the center hill.

Nyah Hernandez of Creekview was unflappable in winning the AAAAAA Girls Individual title in 19:30. Hernandez was a multiple time MS Champ in Track and XC, and in her first GHSA State meet continued her winning ways. There was an early challenge thru Mile 1, but she soon pulled away running solo to the finish line. 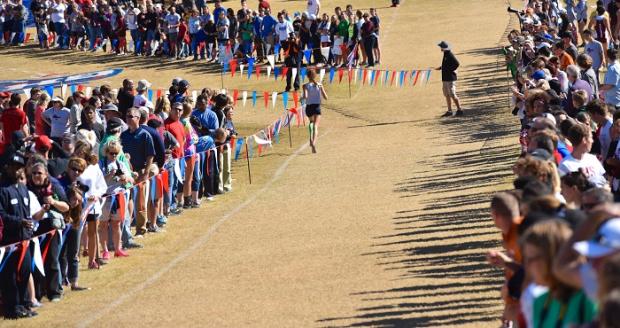 This is as much of Hernandez as nearly the entire field saw. 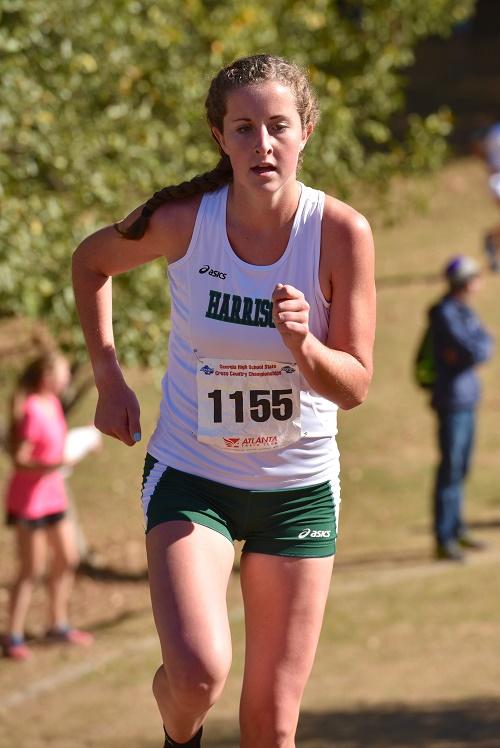 Kira Stanley got the Hoyas started with her runnerup performance.

Pre-Season #1 Harrison bounced up and down the AAAAAA Girls rankings during much of the season. But, when it mattered Saturday, the Hoyas hunkered down and got it done, winning their first State title since 2001 (they also won in 2000) Kira Stanley got things going for the Hoyas' with a 2nd place finish of 19:52. Joining Stanley on the All State team is Alex Lacy, who raced to 9th overall in 20:22. providing crucial support were Jadyn Sethna with a 13th place finish of 20:32 and Kayli Moody at 15th going 20:43. 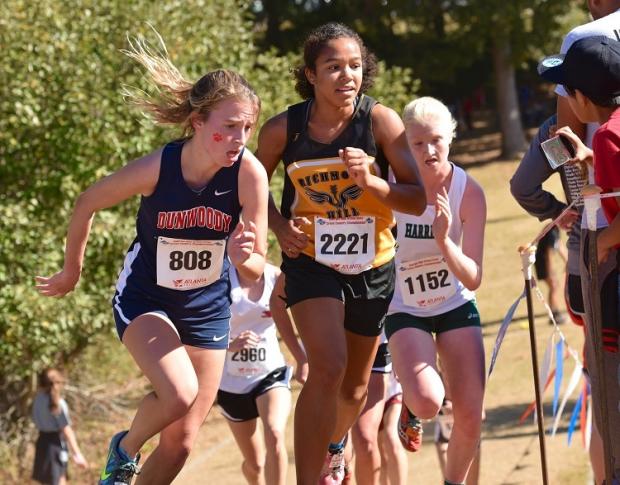 Coach Scott was asked about his Girls performance Saturday and he replied, "Harrison girls ran about as well as we could have. It was truly a team victory, as all 7 girls executed their role/job very well. It wasn't a perfect race, but it was pretty close. We ran the 1st lap conservatively and knew that we were strong enough to push through the 2nd lap.  If we've learned anything from years of racing at Carrollton, it's that going out too quickly can kill you.  Coming from the OLD 6A to the NEW 6A, we felt that we had learned to race as a "7A" team.  And that was a strength of this girls team as we had 3 Sr's and 3 Jr's run at State with lots of large race experience.

The girls had a great later 1/2 of the season.  The 1st 1/2 was plagued with some illness and injuries.  But once we got to October, we had our top 5 healthy and ready to roll.  From Coach Wood to Region to State, the girls just kept getting stronger and stronger. It's been 15 years since we found our way to the top of the podium, and there are a lot of Lady Hoya Alumni out there that share a part of this victory that didn't run on Saturday, who played a major role in the development of this team "

Johns Creek surprised many teams with their runnerup team finish. Coming up big for the Glads' were Allison Rothrock racing to 8th overall at 20:18 and Madigan Wallace placing 21st in 21:03. Alpharetta ran up to their billing taking the 3rd Podium spot by a 4 point gap over Cambridge. Leading runner for the Raiders was Sarah Chappell who placed 20th in 21:05. Cambridge had a nice race ending up with the final Podium spot by 1 point over 2015 AAAAA champ Dunwoody. Clarissa Beck led a tight pack which was key to their success. Samantha Cameron was the top runner for Dunwoody placing 10th overall in 20:23.