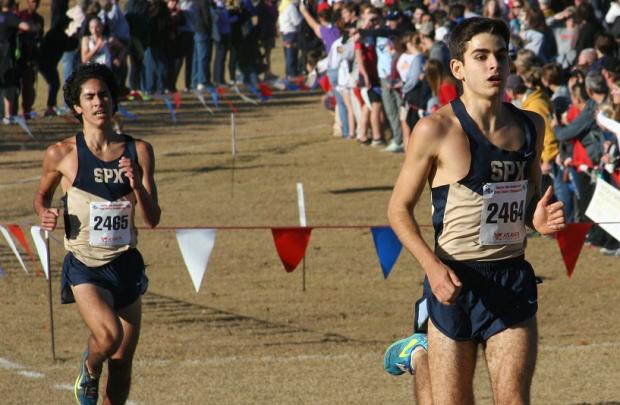 In the biggest upset of the day, St. Pius X boys squad roared down the final downhill wfo, and took down #3 ranked All Classes Marist. The Lions did it by having just as tight a 1-4 as Marist, but their #5 (frosh Jack Voss) made the difference placing 17th Overall. Leading the way, was Frank Crippen, who flirted with the lead during the race. Crippen finished 5th overall at 16:42 to begin the St. Pius scoring barrage. Also earning spots on the All State squad were Daniel Grosch, who was a stride back at 16:43 and Jacob Ressler 8th at 16:49. Thomas Pardue filled in the gap at 15th going 17:02.

When asked about his Boys squad's performance, Ryan Clay replied, "Marist and Blessed Trinity are great teams and I have tremendous respect for their coaches. I knew we would need things to go perfectly to beat both of them. So this was a special win. That race was all about those seniors. We've all run so many miles together over the last four years, we've really become a big family. I've never had a group work harder and do everything I ever asked of them. I am so proud of them and happy for them to see them go out with a win. I've never seen so much emotion from 17-18 year old boys. They were all in tears after the race. To lose the race in the last 400 last year and come back and win this year was amazing. It was just the perfect ending for them.

Our team had a lot of issues all year, I was worried we would never really put it all together. We dealt with a lot of illness and injury the first half of the season, I had my doubts that we would ever get enough consistent training to be at our best in November. But they came together and figured it out. We really started hitting our stride in October. It really helped having the depth that we had this year. We never had the same order in any race. We had guys finish #1 one week and then #5 the next week. The team was just so fluid this year. And in the end I think that paid off. They were able to trust each member of their team when it came time to execute a race strategy.

They followed the race strategy perfectly for the first mile...and then completely abandoned it. I changed a few things on them mid race and it threw them off, so that's probably on me. But one of our big weaknesses both last year and this year was that we had problems finishing hard in the last 1000m. I stressed it all season and they still couldn't quite figure it out. But they finally did for this race. All 7 of them fought for everything they had in the last 1000 and last 400 of that race. They knew where they messed up last year and they were determined to not let it happen again. This was a great team race, with only a 23 second 1-5 gap. I think that's the smallest it's been all year. They ran as a team today, and fought for every single place. I'm thrilled." 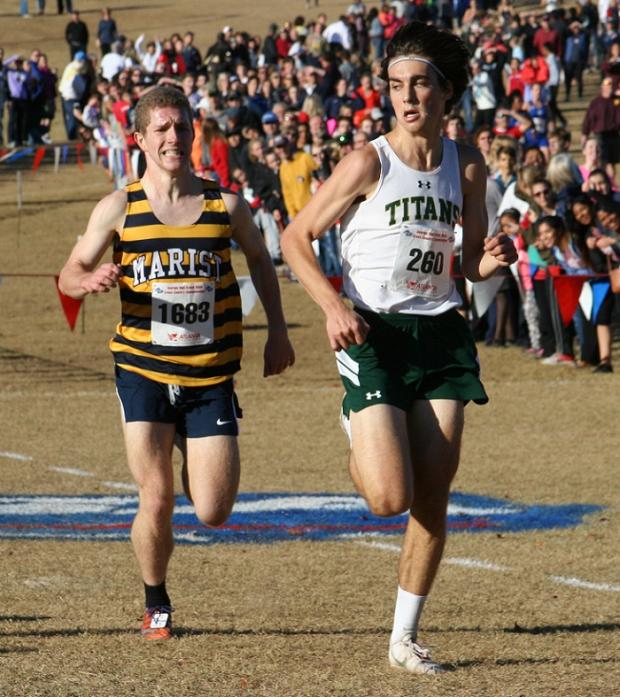 Ben McCoy (r) takes a quick look back at Quinn Burden in their full out sprint to the finish line.

Ben McCoy cranked up a wicked sprint all the way downhill thru the finish line to seize the Individual title in 16:24.11, leading the Titans to a 3rd place Podium finish. Marist, seemed to be executing as they do every State race, but someone told me they were missing David Reteneller today, who was a big part of their 1-5. Quinn Burden challenged hard for the Individual win in a dual with Ben McCoy, which turned out to be an all out sprint down the final hill, but came up just short taking 2nd at 16:24.59. The War Eagles also placed 3 in the top 10, including Leif Anderson 3rd at 16:38 and Knox Pittman 10th at 16:51. 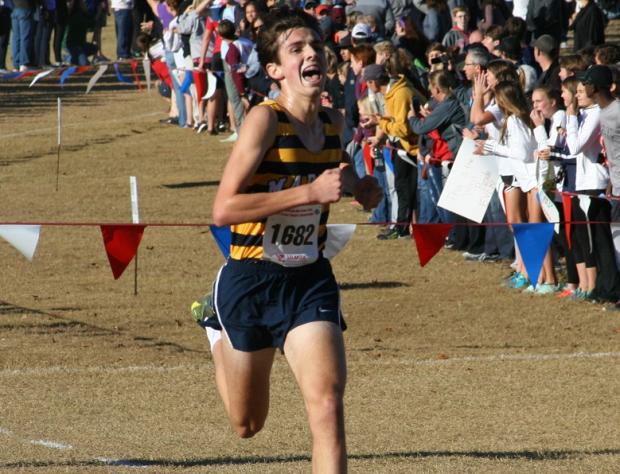 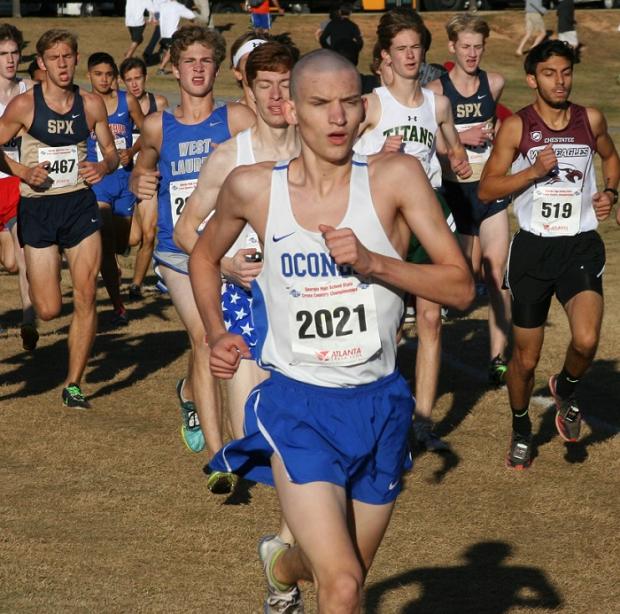 Jake Hadden hammered out a 9th place finish lifting OC to the Podium.

It was a 'Battle of Oconee Part 3' for OC and North Oconee. It seems the power has shifted back to Oconee County, 5 miles down Hog Mountain Rd, as the Warriors made it 3 head to head matches in a row (Clarke-Oconee Area, 8-AAAA and now the State meet defeating the rival Titans to earn a coveted Podium spot. Jake Hadden was the catalyst for OC earning an All State slot placing 9th at 16:51. 8-AAAA schools North Oconee and Jefferson both ended up at 197 points with the Titans taking 5th on a 6th runner tiebreak. Also in the top 10 individually were Sean Parker from Pickens County, 4th overall at 16:39 and Brendan Silliman of Woodward, 7th at 16:45. 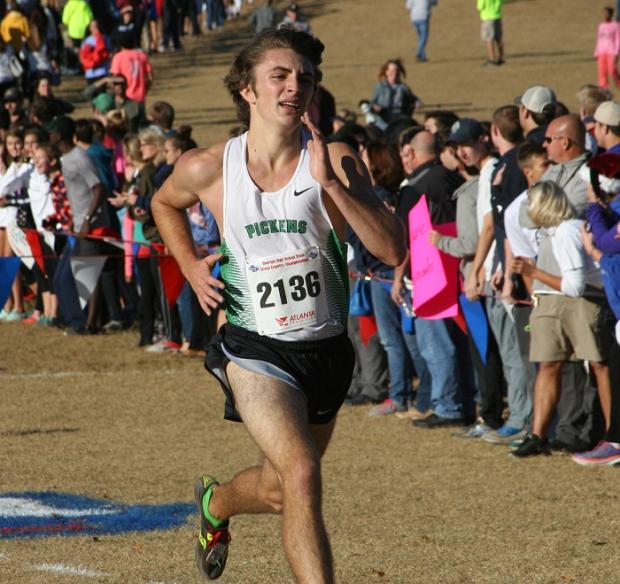