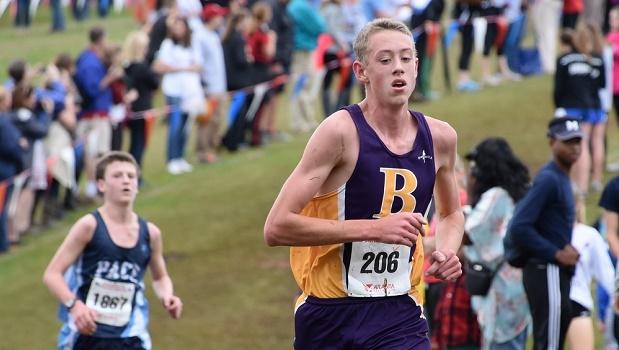 1. Bleckley County- The defending State Champs have an easier path back to the top, after all the metro privare schools in A/AAA now. They had a rough outing at the Kosh Classic this past Saturday, but they may have used it as a workout (Carl Ellis Corley dnr as well) Not sure anyone in AA can hang with the defending individual Champ this Fall. A solid group backs Corley including: Bronson Sanders, Dayton Cannon, and CJ Rich.

2. Banks County- Unfamiliar territory for Banks and nearly all of the Podium contenders after Bleckley. After a solid 6th in AAA in 2015, the Jaguars should be punching their ticket as they look to have 6 of their top 7 back. and compete against some strong NE Ga squads every Fall. Samuel Davidson is their top returner from State with a pr of 17:13. Their 2-5 will need to pick it up to sniff Bleckley in November.

3. Benedictine Military-  The lone private school in AA, placed 7th last Fall, and with the departure of AA metro Private powers, the Cadets should make a push for a Podium slot. Returning 5 of their top 7 is a nice start to that run. Top runner from 2015 is Carson Reddick with a pr of 18:05.

4. Pepperell- The 4-8th ranked squads have never been on the Podium, and the picture is not nearly as clear as the top 3 above. These squads could be up and down in the rankings each week. 16th last Fall in AAA, Pepperell is one of the 7-AA schools that may crack the top 4. They do return 6 of their top 7 including top runner Edwin Chavez (18:43)

5. Gordon Central- Will happily drop down a class into 6-AA after not getting out of 6-AAA last Fall. In a virtual meet based on returners average times they could be a Podium squad in 2016. 6 of 7 could be back, and their 1-5 avg. Split is solid. Top runners back are Valentin Avalos, Bryce Bussert and Kevin Valencia.

6. Model- Model placed 17th last Fall and 2nd behind Darlington in 7-AA. In 6-AA the going could get tight as 5 top 10 squads will be fighting to get out. They may have 6 returners back, including top runners Haden Barker and Colby Reece.

7. Dodge County- Dodge finished just behind Pepperell in AAA last Fall and should enjoy some success in this weakened class. They do return 5 of 7 from a very small squad (no other runners had times) There seems to be more interest though in XC the past 2 seasons. Clayton Scarborough is the top returner with a pr of 18:03.

8. Rockmart- Rockmart did not Q' for State out of 5-AAA last season. Its not going to be easy in 6-AA either as some Podium contenders have a gap on them early. Their top returning seemed to run together as a pack based on average times which should push them through.

9. Armuchee- Armuchee had a successful 2015 as they placed 8th in AA. They will be on the bubble though in tight 6-AA. They do have 5 of their top 7 back, including top runner Bodie Fox.

10. Toombs County- Several years ago Toombs MS actually won the small school MS State title. That didn't translate into HS success though the next few years. They have some fast average times from 2015, but some of the courses had to be suspect, as they dnq for State. Top returners are Tristan Lynn and Ricardo Santana.