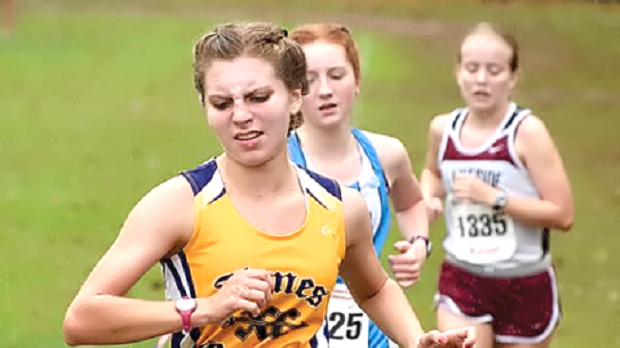 Erin Leonard was a beast for Jones County last Fall.

Girls AAAAA
1- Union Grove:  The Lady Wolverines had a great 3rd place Podium finish in AAAAA and begin the season ranked #1 for the first time ever. They bring 3 true front runners to the table and their supporting cast isn't bad either. Leading the hunt should be: Mackenzie Cromer, Kaylee Haake and Tori Rives.
2- Starr's Mill: The Lady Panthers placed 6th in 2015, but can challenge for a state title if their rising freshman run as well as advertised. All-Stater Mary Valli returns to lead Starrs Mill after placing 6th individually at State.
3- Flowery Branch: The Lady Falcons are coming off a Podium finish from 2015.  The Branch is always dangerous late in the season.. If their top girls get help they will be in the mix. Look for Hannah Grainger and Erika Plummer to lead the pack.
4- McIntosh:  Coming off a 7th place finish in 2015, McIntosh is another school who is consistently fast year in and year out. They graduated their stud LeClaire, but return a solid core in: Rachel Ward, Briana Sattinger and Lily Sullivan.
5- Grady:  Grady had an outstanding 2015 stealing a Podium spot in 2015 AAAA. Having moved up in class, Grady may be sleeper squad. A team on the rise, the Gray Knights return 5 of their top 7 including top runners Anna Tischer and Walden Jones.
6- Jones County: The Greyhounds had their highest finish in school history taking 5th in AAAAA besting many sound metro squads. They return at least 5 of their top 7 including sophomore Erin Leonard who placed 5th as an individual.
7- Buford: The Wolves move up in class to AAAAA which isn't a bad thing, as they dnq for the State meet out of super tough 8-AAAA. Even better, their entire top 7 is slated to be back, including top runners Sarah Davis and Lauryn Davisdon.
8- Woodland: A good MS program that does well down at MS State Championships hasn't seemed to translate into HS success as they could not get out of tough 7-AAAAA. This could be the year they have wanted though as their entire top 7 may be back. Top harriers are Lindsay Scifers (who Q'd as an individual for State) and Cheyenne Spinks.
9- Chamblee: After a solid 8th in 2015, Chamblee moves up in class to AAAAA. The Bulldogs are another squad full of potential, as they appear to have their top 7 back as well. Returning to lead the charge is Junior Beining Xiao who mase All-State last Fall.
10- Rome: This is a squad who on paper looks strong (fast courses?) but had a poor showing in 7-AAAAA last Fall placing 8th. We ran a virtual meet based on top 7 returners (average time) with this top 10 and included Eagles Landing, Walnut Grove and Loganville and they placed 10th. They graduated their #1, but have a sound top 3.
Watch List- Eagles Landing, Walnut Grove, Loganville.
5A Girls GHSA State Championship GHSA State Cross Country Championships Nov 05, 2018
Tweets by GAMilesplit