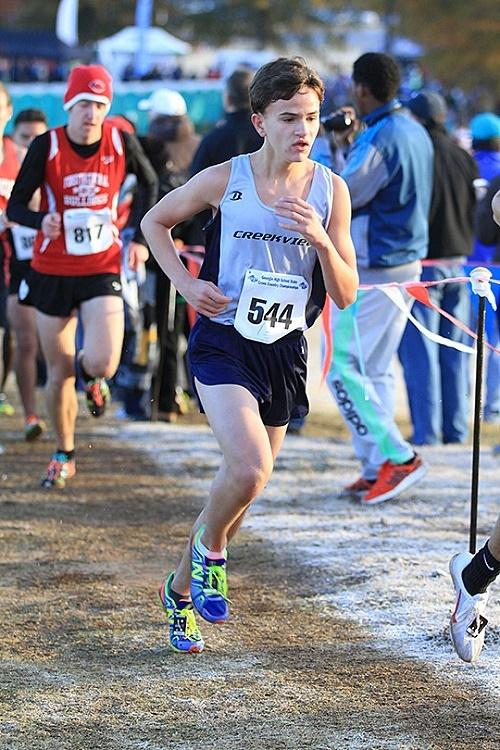 AAAAAA Boys-
1- Alexander-  The Cougars made the Podium last Fall placing 4th in AAAAA. They return 5 of their top 7 boys from last year, plus a strong JV squad. Our boys are led by Seniors Braeden Collins (15:57pr) and Tyler Whorton (16:20) Braeden finished in the top 10 last year. The duo also had break thru Track seasons as Braeden ran a 4:16.84 for the mile and 9:22 for the 3200. Tyler went 1:54 in the 800m and 4:19 1600m. The Junior duo of Austin Muse and Koi Williams will look to tighten the pack, as Austin went 16:26 last year and posted 9:56/4:38 2015 during Outdoor Track. Koi ran 16:58 and 4:33/10:04 in his first year of running.  Rounding out the top 7 will be Warren Taylor, a senior who clocked a 17:13 last year, Mehki Williams, (Koi's twin) ran 4:51 in his first season of running. He came out for the team two weeks before the region cross country season last year and has improved greatly since then. We Alexander has about 5 guys that can go around 4:55-5:10 and 17:45-18:30. Alexander also had a great summer of training...
2- Harrison- The Hoyas placed 20th in AAAAAA last season, but should thrive this Fall going head to head against a mix of returning (AAAAA teams) and the AAAAAA schools who did not move up to the 'Super 44'. While Harrison doesn't have any top tier talent, it does have '7A depth' that will help them press for a podium spot. Top harriers could be Grayson Rolf, Stewart Fronk and Kevin O'Brien.

3- Pope- The Greyhounds did not qualify for AAAAAA State, but will have much more success in the newly aligned AAAAAA this Fall. Pope should be a slight favorite to win Region 7 as they return their 2-5 runners, but will need some JV runners to step up and fill out a strong top 7. Pope's middle distance boys had a strong Spring Track season and had great senior leadership this summer, that motivated some impressive base training. That dedication should pay off and make the team very competitive this Fall. Top returner for the Hounds is Jacob Brenneman who sports a pr of 16:35.

4- Cambridge- The Bears had a great 5th place finish in  AAAAA last Fall and could be a strong Podium contender this season. Cambridge returns 5 of their top 7, though lost top harrier Bjorn Leicher to graduation. Also in Region 7, the Bears could push Pope for the 7-AAAAAA crown. Seniors, K.J. Hirschi, Zack Morgan and Kenneth Hirschi are the top returners.

5- Sequoyah- Sequoyah is another school that was in a tough region in AAAAA during 2015 and failed to qualify for the State meet. They should enjoy more success this Fall as 5 of the top 7 are slated to return making them a top Region 6 squad and Podium contender. Top returners are sophomores Josh Meyers and Aiden Heard.

6- Lakeside Evans- The Panthers seem to get ranked fairly high during the season and struggle at the State meet in recent history, placing 7th AAAAA last Fall. The good news for the Region 3 Panthers is their 1-5 stays intact led by Individual state title contender Senior Allen Clark and Joe Way.

7- Johns Creek- The Gladiators are another team that did not qualify for State in the 2015 AAAAAA meet, but should fare much better this season in Region 7. Johns returns 4 of their top 7 and with a large program could find a couple of runners to step up making them Podium contenders possibly. Top returners are Matthew Wozniak and Nathan Gathreaux.

8- Northview- The Titans placed 19th in AAAAAA last Fall and could be a top 10 squad during the season, although they could also find themselves on the bubble in 7-AAAAAA along with Northgate and Alpharetta. Northview returns 4 of their top 7, but have top runner Ryan Larcinese back to lead the charge.

9- Creekview- The Region 6 Bears finished out of the top 10 in AAAAAA last season and would like to improve upon that performance this Fall. They only return 3 of their top 7 from 2015 including top harrier Zac Cantrell.

10- Dalton- Dalton is another team that did not qualify to compete in the AAAAA State meet in 2015 after having a disapointing region race. They do return 4 of their top 7 including top runner Adan Rodriguez.