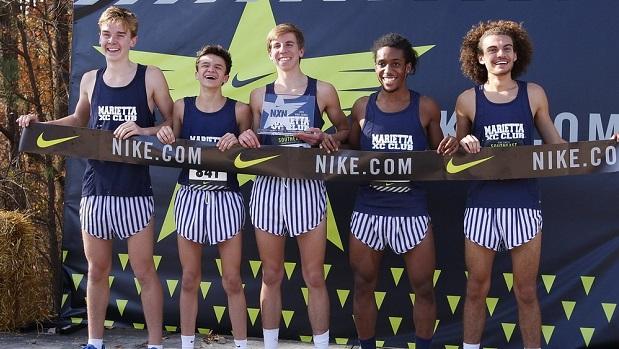 The Marietta Five...Sounds like a conspiracy, too good to be true, but the 'Five' needed no more than to do what they have all season...Take Care of Business. The Blue Devils have become the 2nd Boys team from Georgia to win the NXN Southeast Regional (Brookwood did it in 2009) and earn an auto-qualifier spot for NXN Nationals held in Portland, Oregon next Saturday. Ga.MileSplit spoke with Head Coach Jack Coleman about Marietta's race below.
'We wanted to get a good start and put ourselves near the front with as little effort as possible until the bottom of the first trip up the Wake-Med hill.  The 2K split results showed we were in good position being 4th at that point in the race, with all our guys inside 60th place.  The plan was to then start the pick off people as the course got tougher. Plans don't always work out.  Savic had decided today was the day he was going to "go for it" and he planted himself near the front pack being in 10th at the bottom of the hill.  Savic got as high as 4th at the 3200 before he started to tighten up.  He was hanging on to the top of the hill after running the best race of his life finishing 11th. 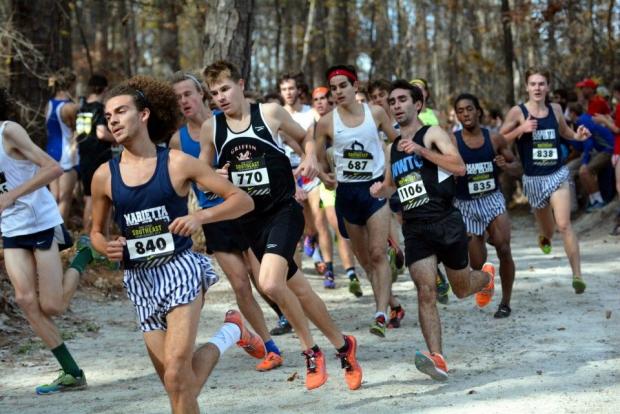 The rest of the guys started to move up except Torres.  He had become sick the Tuesday after state (good timing) and hit a wall on the hill.  He lost 26 positions over the last 3K, but I did see him pick off 2 people as he came up the hill the 2nd time so I can't fault the effort. He refused to give up and that's all I can ask. Tullos was of course Tullos and it never gets old seeing him race.  He spent the 2nd half of the race moving up helping to overcome the positions we were losing with Carlos.  It was textbook Tullos as he worked his way through the crowd. 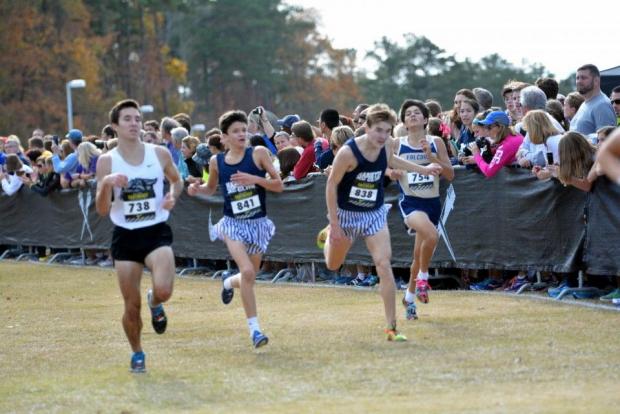 Patterson had a great race right up to the top of the hill and then made an adventure out of the finish, falling about 7 meters from the line.  While getting back up he gave up 4 spots.  He gave everything on the hill passing a number of people (more than the 4 he gave up) and was about out of energy.  Another second on the ground would have been 4 more positions lost.  He wasn't staying down though and made it through the line.  He never gave up. KhayVonn stayed calm and used his strength through the race.  He moved up gradually throughout and ran smart.  He showed no signs of fatigue from playing basketball since the state meet.  He has really become a smart runner this year not over running the first half of races. 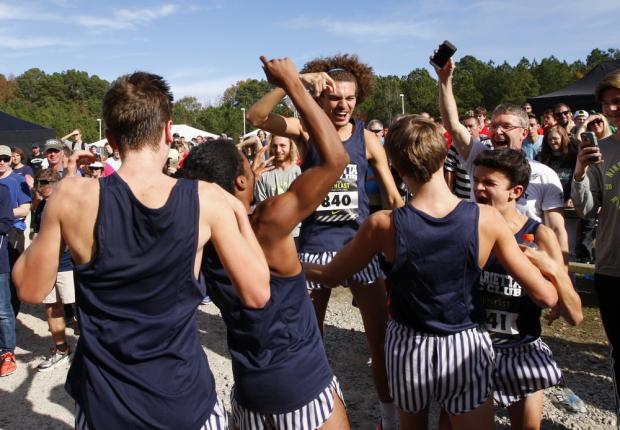 The excitement was not over.  Coach Christman recorded the guys coming through at the bottom of the hill before the finish.  He came running up after the race was over so we could get the results before the annoucement.  You know how us coaches hate waiting for results.  There were 3 teams wearing the same uniform with a blue top and black bottom.  With the glare on the camera you could not make out who they were.  We were convinced for 20 minutes we were back in the pack between 2nd- 6th place as there were 5 guys in that uniform in front of Tullos.  Turns out it was 2 different teams and some unattached runners.    Finally someone saw the results online as flashresults somehow mistakenly leaked the results before the announcements.  We didn't tell the guys, plus I wasn't believing anything until I heard it.

We had waited for this day since last year and all our training and focus was on this meet.  The weather was warm for November and that probably elevated the times of the race, but we all know XC is really about place. It was a dream come true for the guys and it's just been a blessing to have them run for us and be able to help them achieve their goal.  Coach Heintz said it best "They earned it".  The boys really do work hard in practices and in the off season and race hard on race days.  I hope we can represent the state well at nationals this week.'