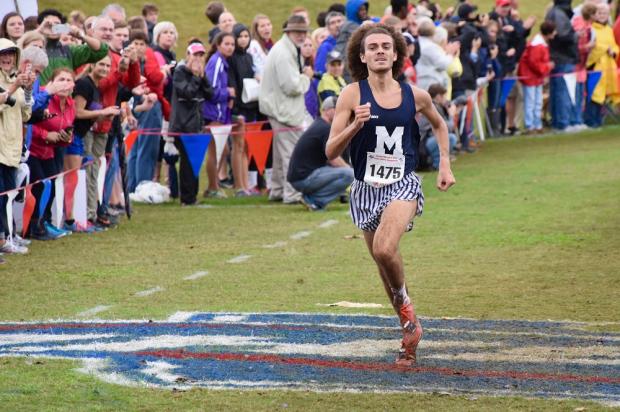 Marietta came and conquered, just as in 2014. The Blue Devils put on a show, flying around the toothless band field area (without Separation Slope - 1A Private thru 5A had to run the 'Separation Slope' route, as meet officials decided only after 2A Girls to use the alternate route. The infamous hill was becoming unsafe to traverse with all the mud, despite valiant efforts throughout each race by meet management to maintain its stability.) The reigning champs had 4 runners in the top 6 places, completely crushing the dreams of any upset-minded team. Carlos Torres won the Overall title, posting the fastest time of the day at 16:06, followed by running mate Hayden Tullos, 2nd in 16:15, Khayvonn Benson, 4th in 16:28, and David Savic, 6th at 16:33. Ben Patterson slammed the gate, back only in 14th and posting a 16:54. Marietta should be primed to secure a spot at NXN Nationals late November if they run well at Regionals in Cary, NC. 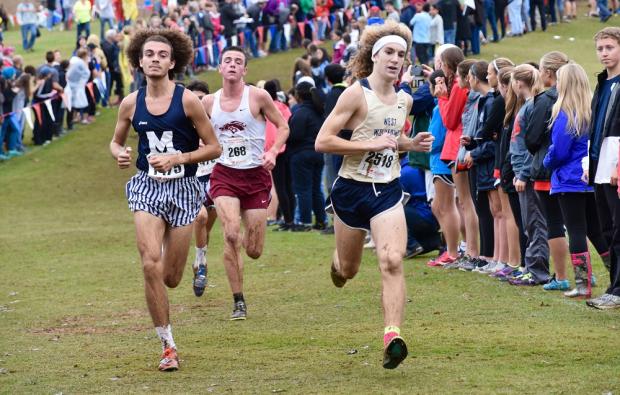 6A Boys Leaders at the 'Horse Shoe' (photo by Daniel McCauley)

Brookwood, as expected, was the top Gwinnett squad, taking 2nd on the Podium with 77 points. Zach Israel was top Bronc', racing to 3rd at 16:26, and Gruem Tesfamariam took 9th at 16:37. Peachtree Ridge had a fine race, seizing 3rd place without placing a runner in the top 10. The Lions instead packed it in with a 1-5 Split of :26, making the Podium. Nate Reichard led the 'Ridge', placing 13th Overall in 16:49. Milton also ran well as a team and got that final spot for glory, led by their frontrunners: Jack Bluth taking 7th in 16:36 and Sam Bowers a step back in 16:38. Making the 6A Boys All-State squad not mentioned above were Jonathan Schwind of Lambert, 5th (16:31), and Tyler Barber from Mountain, 10th (16:43). 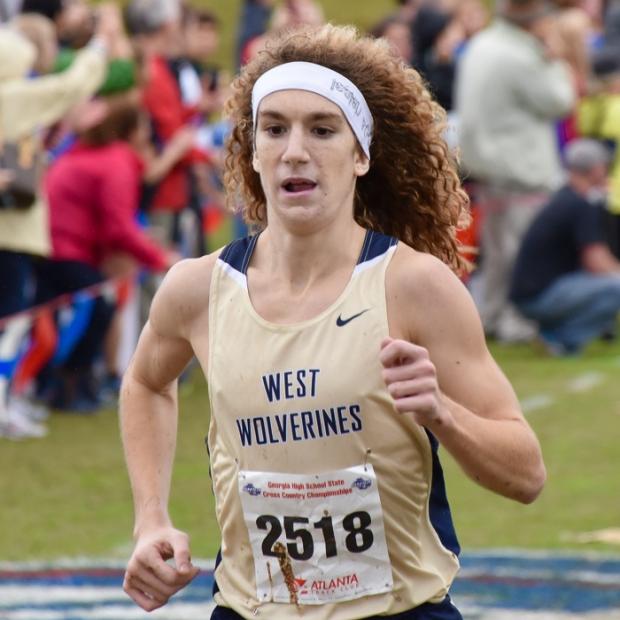 John Green of West Forsyth crossed 3rd, but got a 'Raw Deal' on a headband DQ' (photo by Daniel McCauley)

There was some controversy on a "uniform DQ'" concerning John Green of West Forsyth who crossed the line 3rd. Inside reports were that a warning was issued at the starting line, but Green finished the race with the item around his head (headband with writing), and judgement was rendered by meet officials. Stupid rule, but a rule.