Deerfield Windsor School and the people at Darton host an impressive meet. This is a great spot for a late season race with temperatures usually cool but rarely below freezing this far south. Albany also hosts the GHSA women's track championships in the spring and the GISA track championships for both genders, proving that it a great sports town. MileSplit was onsite catching the action from MileSplit photographer Jeremy Danzie's eye. 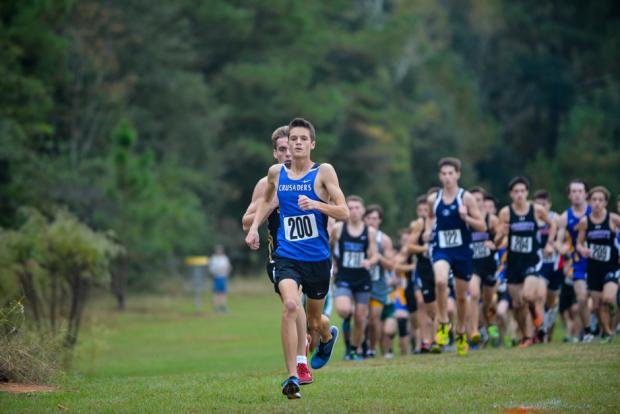 3A Boys- The AAA Boys Race took off a little after 10 am with the sun well up in the sky and the temperature up into the high sixties. From the jump, it was a two-man race between the GISA's two top runners, Trinity Dublin's Jacob McLeod and Southland's Wright Calhoun. Unlike prior contests between these two, Calhoun held on through McLeod's surges and both runners launched a kick down the gentle hill to the finish line in front of Darton's soccer complex. The two second spread for McLeod held up at the finish, and both runners cracked the 16-minute barrier for the first time. Evan Downs of Westminster Augusta (the 2013 champ from the Loganville GISA course) set himself up in third place with space behind him, but could not make a move on the leaders. The fourth-place group behind him was fluid, at one point led by McLeod's teammate, Quillian Holland. On the last mile, Southland's number 2 runner Billy Calcutt overtook Holland and made an unsuccessful run at Downs before taking fourth. Holland finished fifth and Deerfield's top runner, Ethan Merritt, sixth. The team battle picked up here, with Trinity Sharpsburg's top two runners Troyer and Richardson bracketing Southland's number 3, Ridge Roland. When Southland Senior Brian Miller grabbed the 14th spot, Sharpsburg's depth could not make up the difference. Southland fifth man, 8th grader Gray Torbert, slid in at 26th, giving Southland its third straight GISA AAA Title and avenging its only GISA loss this season at the Battle of Atlanta. Augusta Prep (the 2013 runner-up) finished third with Burnside and Chen taking the 11 and 12 spots. Deerfield's boys -- runners-up out of Southland's Region -- took fourth. 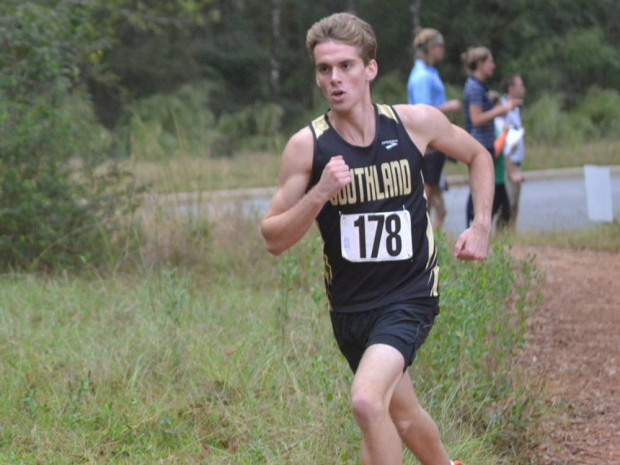 Wright Calhoun of Southland was Overall Runnerup in 15:54

Billy Calcutt from Southland was 4th at 16:40

This was the final run for Southland's Calhoun, who finished as runner-up each of the last four seasons, including last year to Jacob's big brother Kaleb Mcleod. To my eyes, Jacob is every bit as competitive as his big brother and will be a force in the big races against the GHSA runners. 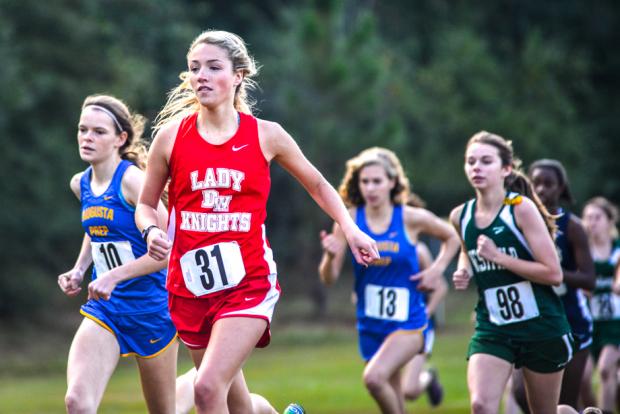 Virginia Moore of Deerfield-Windsor sprints away at the Start.

3A Girls- The first race of the morning was the AAA Women's race. Temperatures were cool and the course was dry after several rain events during the season and some light rain during the week leading up to Saturday. The race was the Virginia Moore show from start to finish. Different runners tried to give chase. Alex Dunn of Frederica held on the longest. Moore's teammate Camryn Bridges eventually surged to the front and the two Deerfield girls came in 1-2, starting what turned out to be a dominating win for Deerfield's girls -- their first state title in cross country after taking the women's track title in the spring two of the last three years. Dunn finished third, with a pair of eighth-graders Sovi Wellons from Heritage and Janie Samson from Trinity Dublin bracketing Augusta Prep sophomore Jodie Holodak. 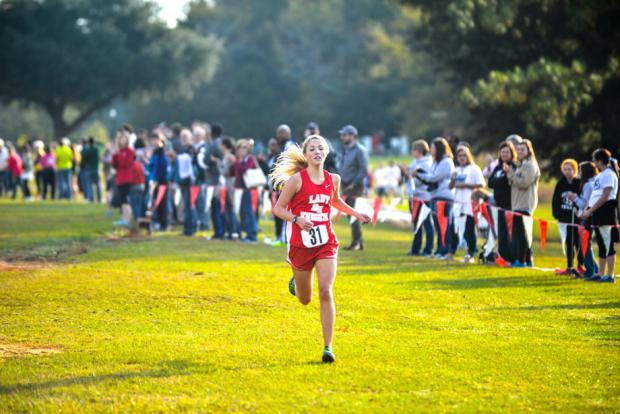 Sr. Moore close out her GISA HS career seeing nothing but green going 19:17

For the senior, Virginia Moore, this was her first and last chance for a state cross country title after being outdueled last year by Ruthie Powell. To my eyes, both Moore and Bridges could have run even faster had they been pushed. The Deerfield girls picked up three more spots between 11 and 20 to take the title. Cathy Jones has put together a solid program with several promising young runners in the pipeline. There was a three-way battle for the runner-up spot with last years champ, Westminster of Augusta, and Atlanta's Holy Spirit Prep Southland. The Lady Raiders from Southland took third with 127 points, 20 points behind runner-up Westminster and two points ahead of fourth-place Holy Spirit. Westminster's runners were a little quicker than their Southland counterparts, with Westminster's top runner in the 12 spot and Southland's in the 13th. 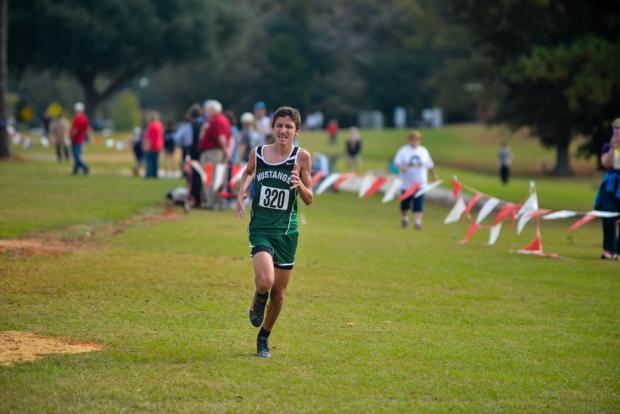 2A Boys- The Boys race was quite competitive as 9 schools battled for the AA team title. And, how close it was, as it came down to a 6th rinner tiebreak to determine the Champion! St. George's Episcopal was a little deeper on the caboose, taking the title led by the 4th place finish of frosh Sam Potter as he went 18:22. Runnerup Mill Springs was stronger up front led by Sam Lynch who took the Individual honors in a solid 17:15. Grace Christian was 3rd followed by Brentwood.

Rounding out the top 6 Individuals were: Overall runnerup Bill Lester of Briarwood (17:42), Andrew DesRoches of the Cottage School 3rd (17:50) and Jarett Jackson from Toombs Academy 5th (18:42) 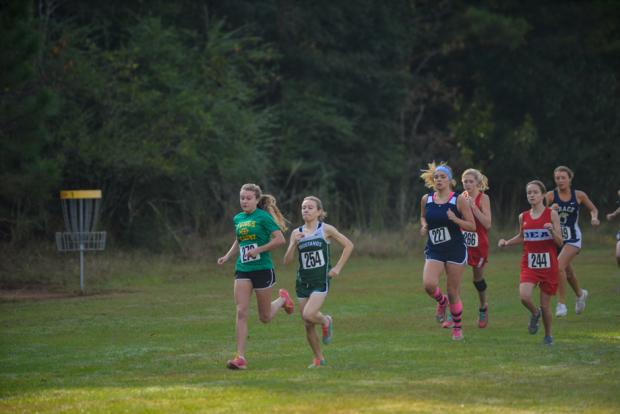 2A Girls- This had to be the smallest race in recent GISA history for the AA Girls race as only 3 schools managed to score as a team. There was a nice battle for the Overall Champion as Ivie Nobles of Twiggs Academy and Sophie Davis from Mill Springs were 2 minutes ahead of the field. Nobles prevailed taking the win clocking a respectable 19:46. Davis was :07 back at 19:53 claiming the runnerup spot.

Brentwood (out of Sandersville) won the team title by 20 points over Twiggs Academy with Grace Christian 3rd. Brentwood placed 5 gals in the top 10 team scoring places led by frosh Michael Ann Hood's 5th Overall finish at 22:15 and Jil Musselwhite in 9th. Rounding out the top 6 Individuals not mentioned above were: Charlotte Osmers (unattached) 3rd in 21:28, Perra Harrell of Grace Christian 4th (21:40) and Alden Lisse (unattached) in 22:40.