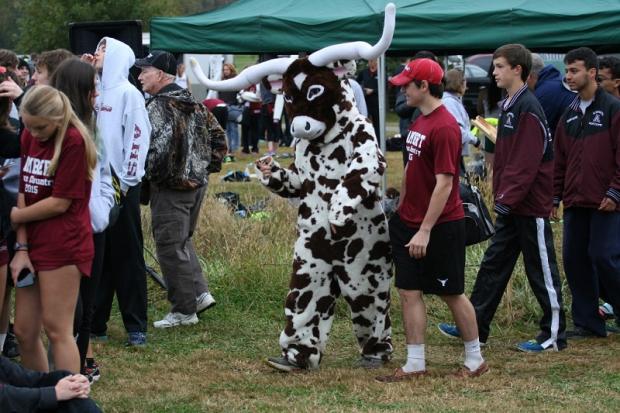 It was a cloudy day chock full of colorful 'characters', parading around in their hokey Halloween costumes. Including, a funky 'Longhorn' and a crazed Gorilla..But the real action was out on the course, as Lambert's Longhorns destroyed the Boys field and South Forsyth's gals took advantage of Northview being down a key member, winning the Region 6-AAAAAA team title. (pics by Matt Almand) 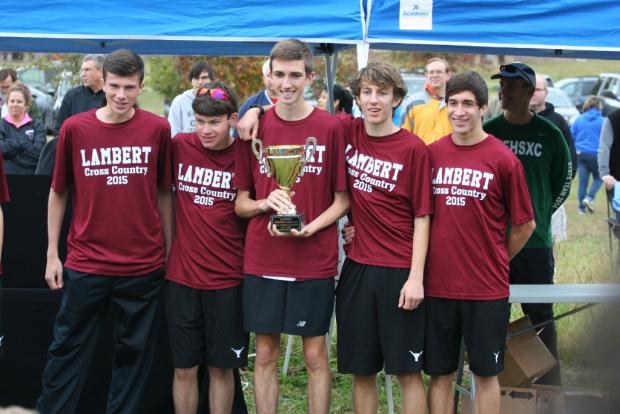 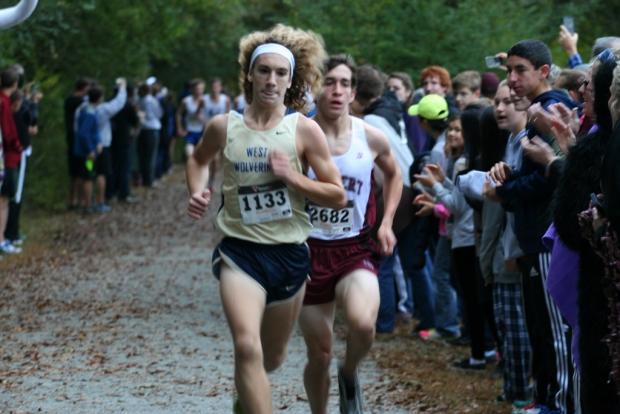 John Green of West Forsyth and Johnathan Schwind from Lambert mixed it up early and often.

Varsity Boys Individual- It was nip and tuck nearly the entire race for the Individual title, but West's shaggy haired John Green prevailed once again with a winning time of 16:28. Schwind of Lambert was :10 back for runnerup at 16:38, Soph Tyler Fox of Lambert finished 3rd posting a 16:54. Matt Bissett of West claimed the 4th spot at 16:57, with a pair of 'Hooch Harriers' Q'd as individuals including Owen Schilger 5th (17:00) and Adam Estroff 6th (17:03) 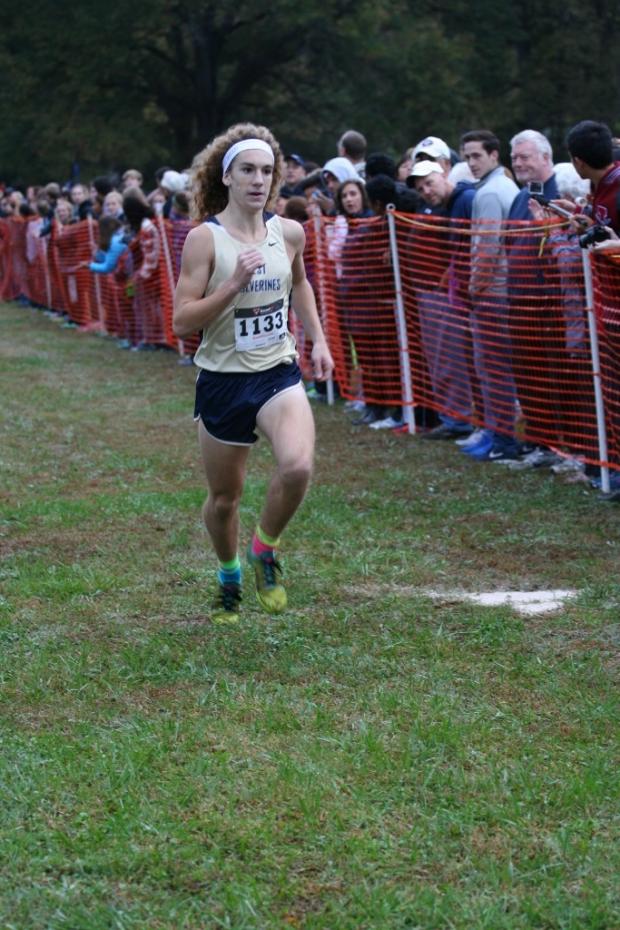 John Green races to cross the finish mats posting a 16:28 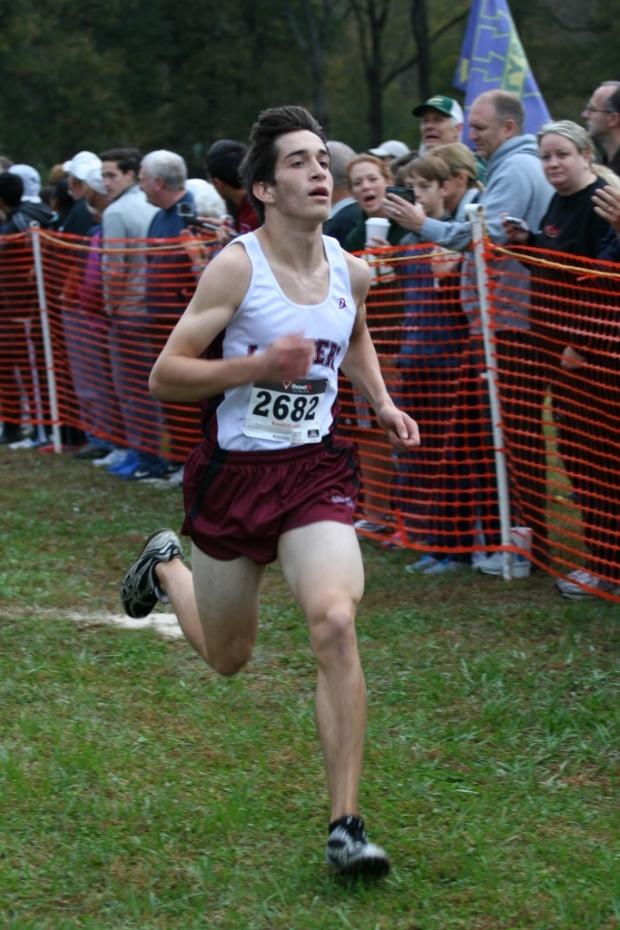 Johnathan Schwind led a stampede of Horns' to the Region title placing 2nd at 16:38 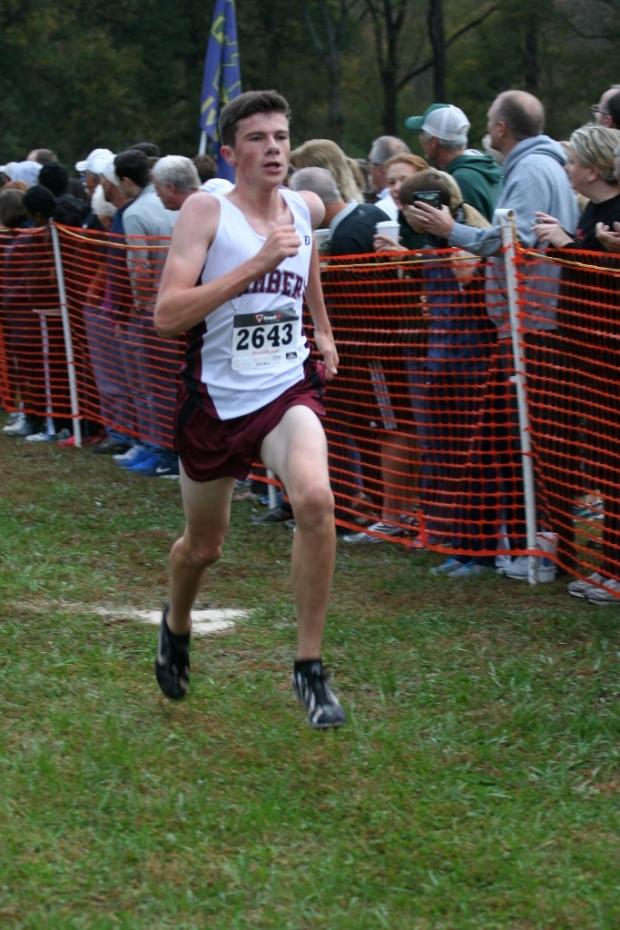 Tyler Fox continued the onslaught for Lambert placing 3rd in 16:54 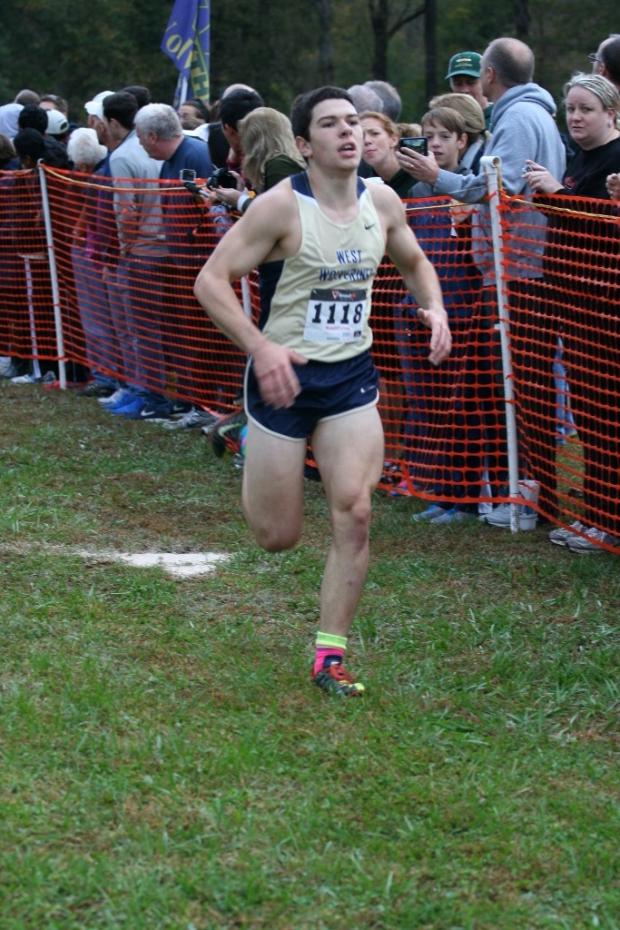 Matt Bissett of West Forsyth was good for 4th Overall at 16:57. 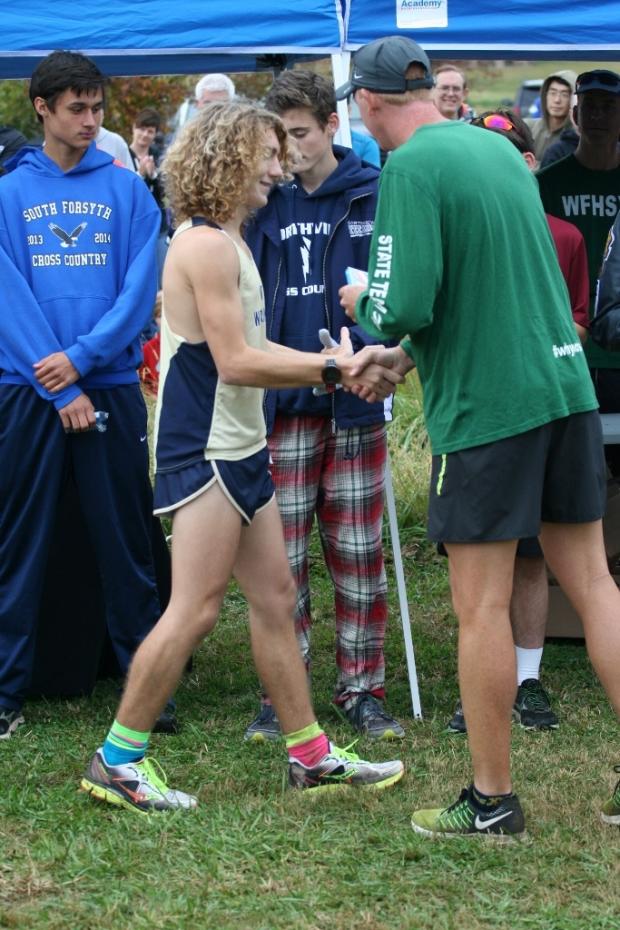 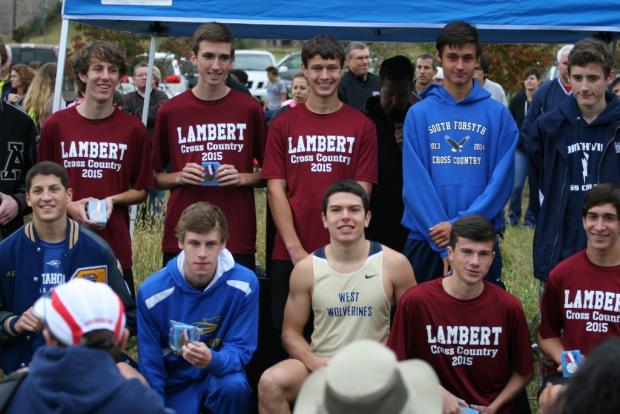 Here are most of the top Varsity Boys Medalists, as rabid parents scrambled like Zombies for pics! 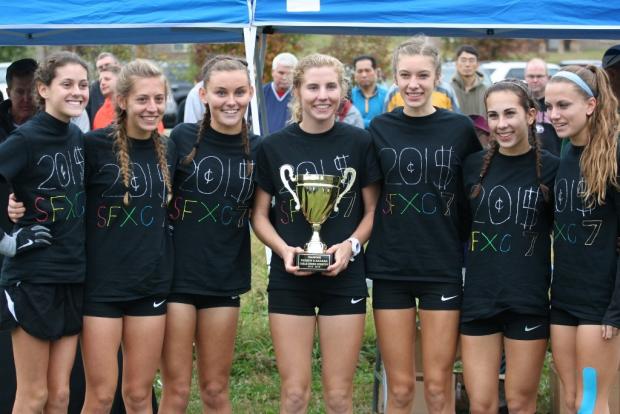 South Forsyth relishes their title and will aim for more in 6 days!

Varsity Girls Team- #1 Northview seemingly was without one of their top 5, and South Forsyth jumped all over it, running away with the Region team title by 17 points over runnerup West Forsyth who may have lost their ace Liz Galarza for the season as she hasn't raced in weeks. Northview came up 3rd and will hope to be full strength next week and defend their State title. It was a day of 'Doom' for Johns Creek as Alpharetta nipped them by 1 point securing the final ticket to Carrollton... 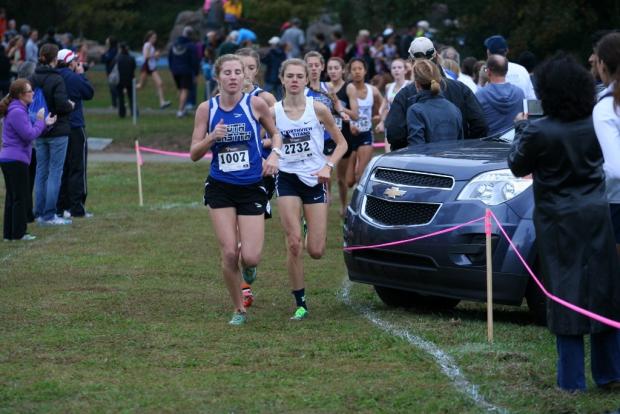 Someone's 'Chevy' nearly made a mess out of the early race leaders! 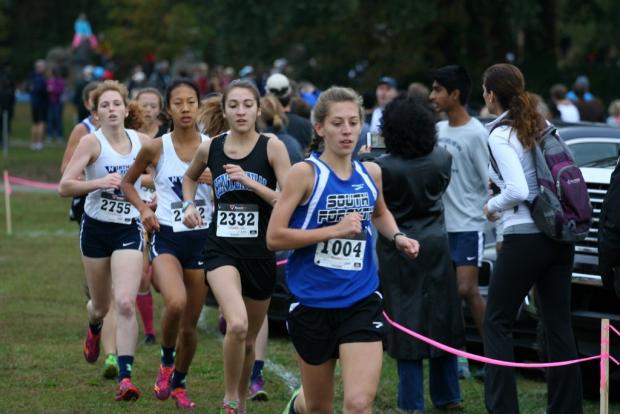 The chase pack attempts to keep pace with Billings and Carnahan. 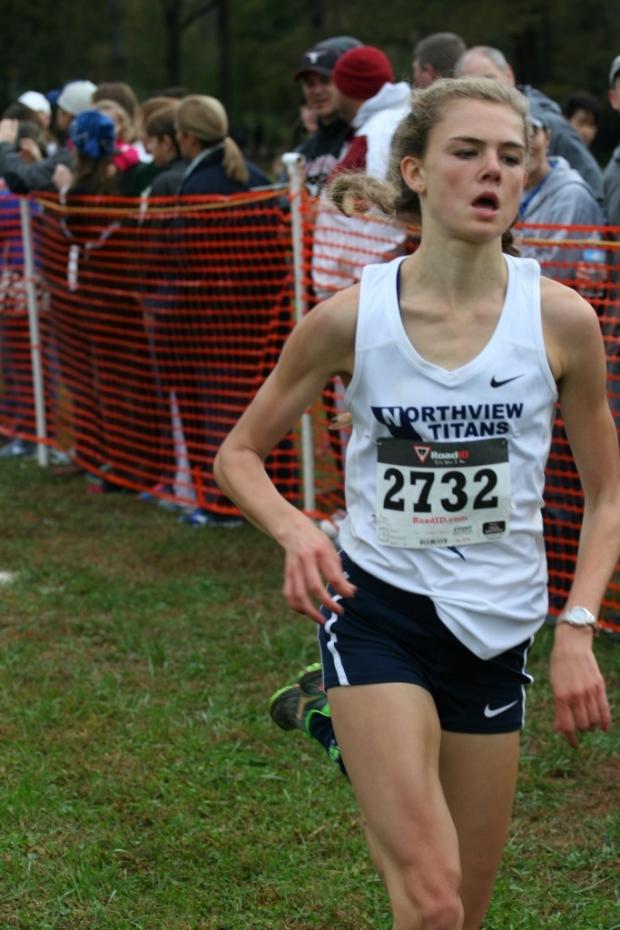 Varsity Girls Individual- Lindsay Billings was her usual 'machine-like' self again, eventually breaking a very talented field and sailing away with the Region Overall title in a quick time of 17:37. Friendly rival, Savannah Carnahan of South crossed 2nd at 18:12 followed by her soph running mate Kaylee Dupont in 18:19. Rounding out the top Individuals were Tiffany Yue from Northview 4th (19:13), team mate Shannon Marsh 5th (19:22) and Q'ing as an Individual in an intense battle down the stretch was Katie Meyer of Centennial at 19:23. 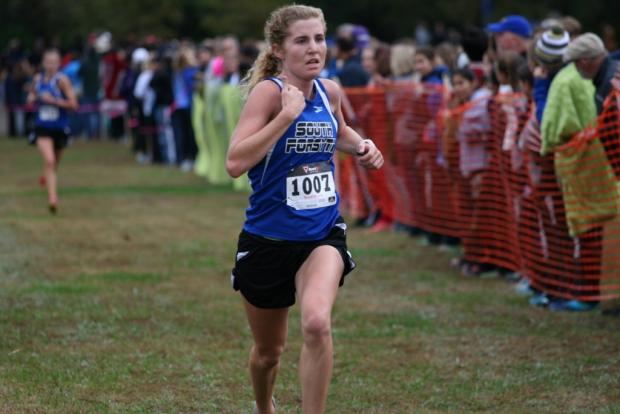 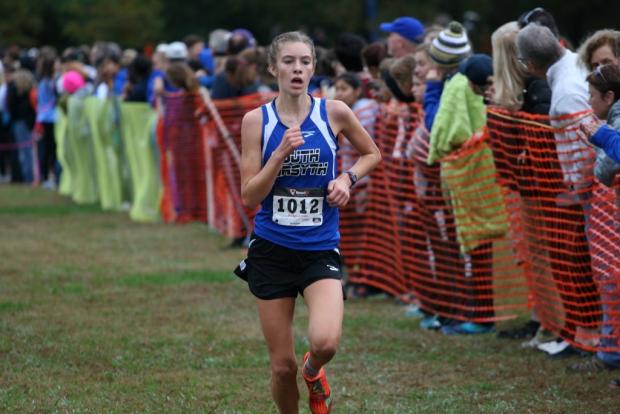 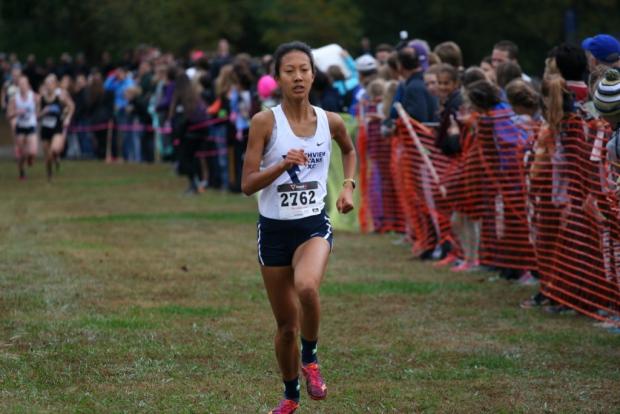 Tiffany Yue had a solid race for Northview taking 4th 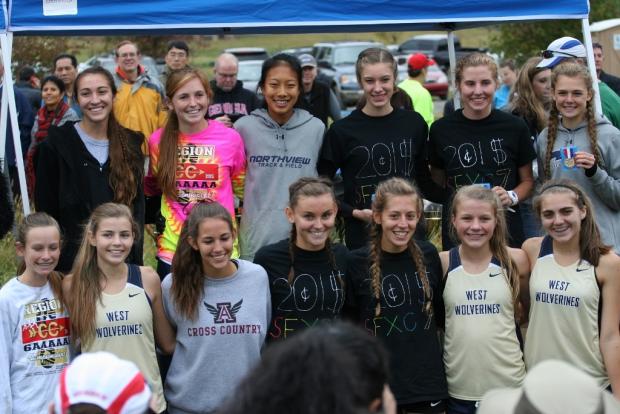 Yay! We got all the Top Girls Region Medalists in this pic!