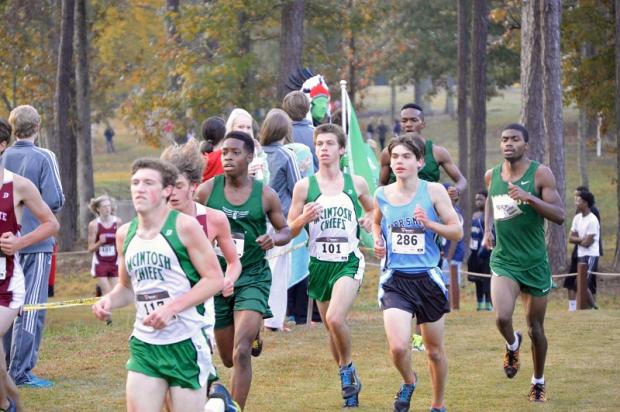 In what was by far the most competitive Region meet of the day, as well as Carrollton Last Chance, 4 of the top 7 ranked AAAAA Girls squads and 3 of the top 9 Boys squads let it all hang out at the beautiful Heritage Christian Church course this morning. The Varsity runners definitely had cooler temps, but prs were being achieved by many in every race. Starrs Mill put on a great race and their Volunteers were first class.

Boys Varsity- This was a showdown of who was the best in Fayette County as well as 4-AAAAA. McIntosh came out on top winning by 6 points as the Chiefs placed 5 guys in the top 13 spots (1-5 Split of :25) making the difference.

Jaeger, Bowers and Wilson of McIntosh seal the deal for the Chiefs (pic by Dave Bowers) 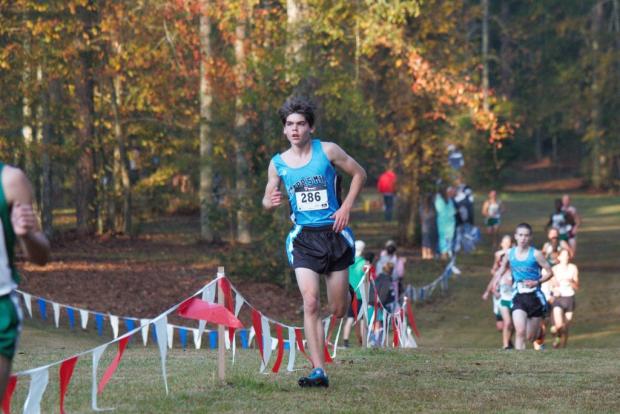 Freshman Harrison Fultz was full bore for the Panthers winning the Overall title in 16:16 (pic by John Fertig)

Starrs Mill's runnerup team finish was led by a pair of frosh including Overall Champion Harrison Fultz, as he had the race of his life on his home course going 16:16 for the win.

Northgate and Union Grove claimed the final 2 tickets to Carrollton in 2 weeks. Northgate snuck 2 harriers in the top 10 including Overall runnerup soph Hayden Hasberger with a sweet 16:22 and Sr Andrew Tuttle back in 8th at 16:45. Union Grove Jr Matt Seitz led the Wolverines attack placing 11th in 16:50.

Cameron Pack from Morrow (151) and to his right, Deonte Lee from Ola are headed to State as Individuals (pic by Bruce Taylor)

Having great races for their schools and punching as Individuals were Deonte Lee from Ola HS in 3rd going 16:23 and Cameron Pack of Morrow a few steps back in 4th at 16:25. Congrats to all the State Qualifiers! 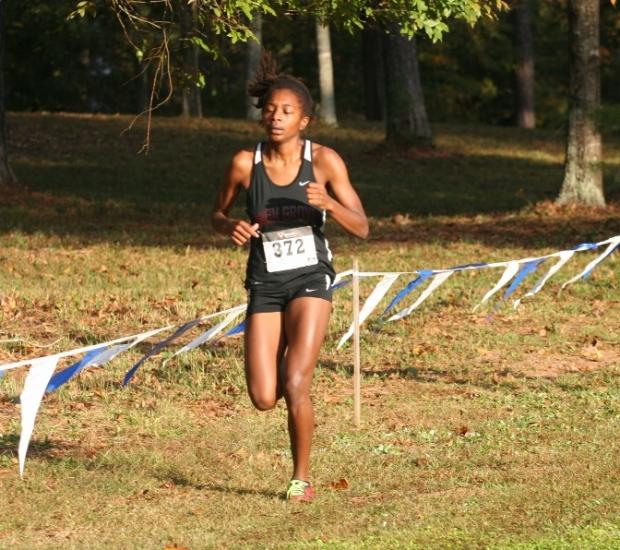 Girls Varsity- Union Grove was ranked 2nd coming into the meet and proved their mettle, easily winning the Girls Region championship scoring 30 points as their top 5 all finished in the top 10 places. Sr Ellunde Montgomery led the pack on this day racing to 2nd Overall in 19:05 with frosh running mate Mackenzie Cromer a stride back in 3rd at 19:06.

Shoring up the Wolverines title effort were Juniors Kaylee Haake 7th (19:51), Tori Rlves 8th (20:02) and katy Gwaltney 10th (20:10) Union Grove will have 2 weeks to prepare to clash head on at State with defending champ Dunwoody, who rested their top 5 today at Region 6-AAAAA, though cruised away with the title. Be there! 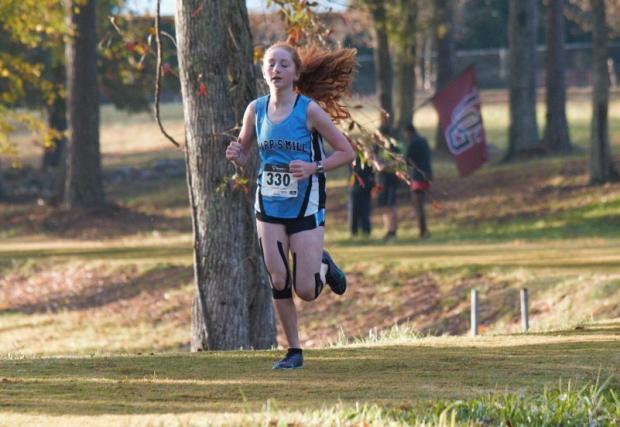 Starrs Mill got a little payback on McIntosh in the girls race securing 2nd teamwise by 6 points. Giving the host school's fans something to celebrate was soph Mary Valli as she overtook the leader on the 2nd loop and pulled away down the final stretch winning the Overall title in 18:58. Sr Sophie Handel was key placing 5th in 19:26. 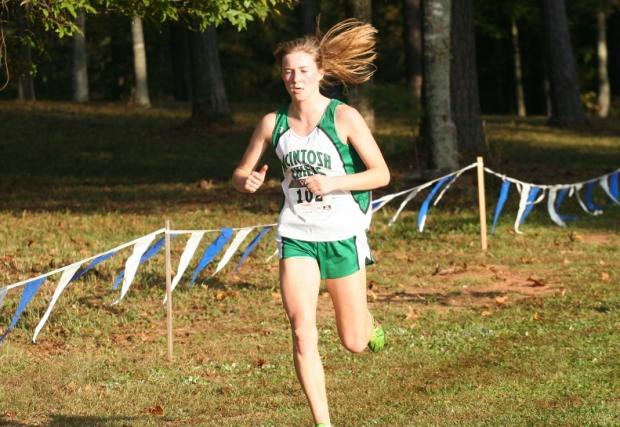 Alyssa LeClaire led the first loop and hung on for 4th Overall for McIntosh.(pic by Bruce Taylor)

McIntosh was led by Alyssa LeClaire (who led beginning the 2nd lake loop) as she hung on tough for 4th in 19:08. Northgate punched the final team pass to state easily taking 4th led by the top 10 finishes of Elise Glorvigen 6th (19:49) and Caroline Nelson 9th (20:07) Congrats to all the State Qualifiers! 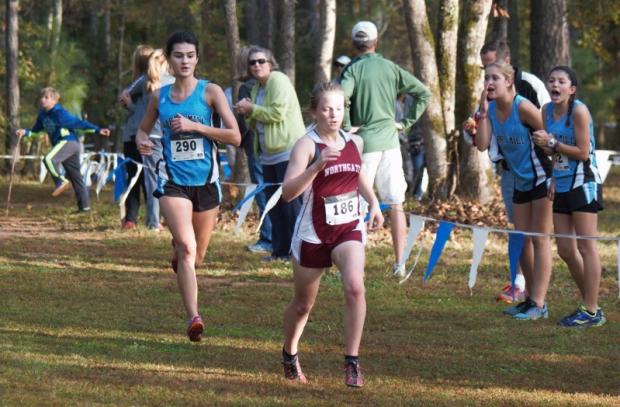 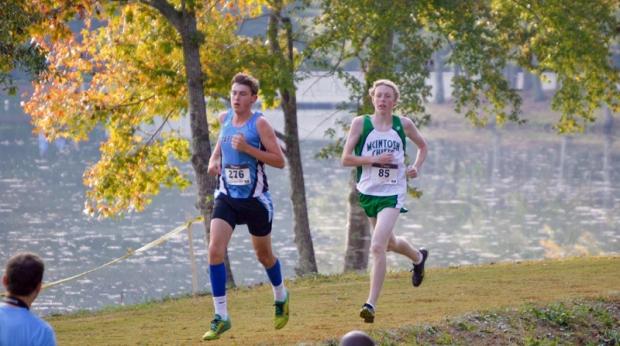 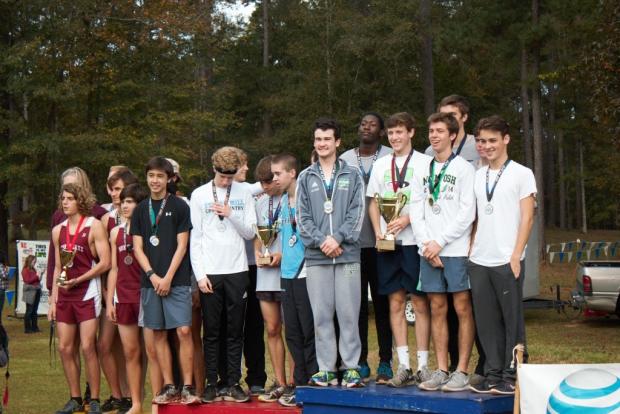