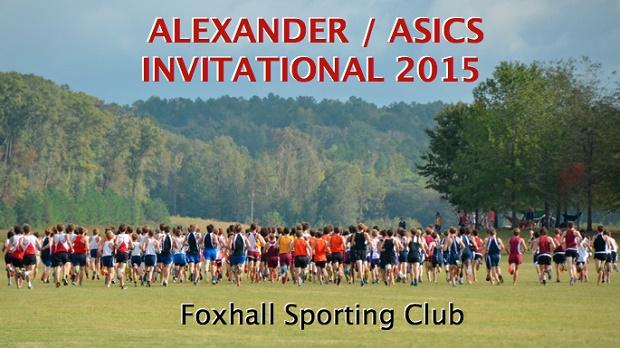 (All Photos and Captions by Daniel McCauley)

Weather looked to be an issue coming into this meet late Friday, but, after the course got a good soakin' overnight, it seemed to drain quite well by the early 'dark' start of the Championship Boys race. A thick blanket of mist enveloped the fields at first, but, as the morning progressed, it steadily rose up to reveal the beautiful, flat course ahead.

The Championship Boys vanish into a heavy blanket of fog at the Foxhall Sporting Club. The starting straightaway is 800m long, with more than enough space to accommodate the runners from 5 states.

What seems strange, is how fast the Championship Girls ran compared to the Championship Boys on the same course ? Were the Boys laying back playing possum in a strategic race? Were the Girls just pedal to the metal instead? Any explanations or conspiracy theories are welcome, lol! 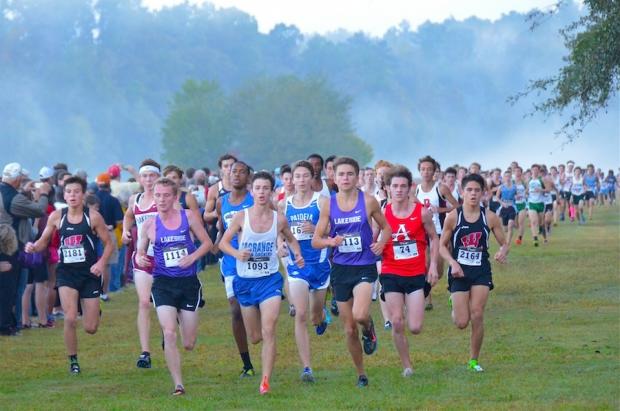 The Leaders of the Championship Boys race hit the 1 mile mark at a conservative 5:03 on the saturated course. 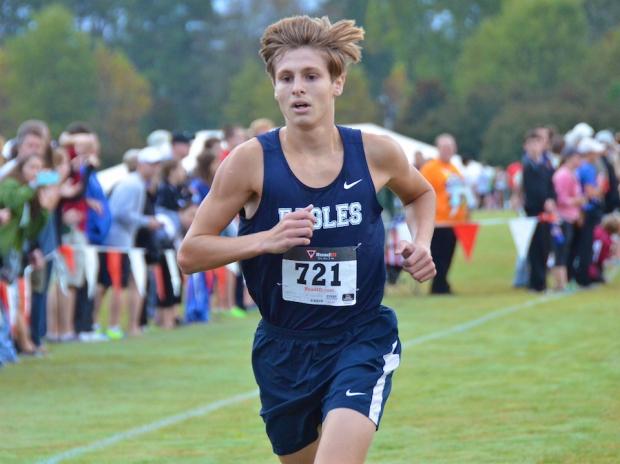 Chase Kennedy of East Jackson turned in a Personal Best performance, winning in 15:32.

Chase Kennedy from East Jackson HS redeemed himself, after his disappointing race at 2014 Asics when he was ill, by putting the hammer down this past Saturday. He bested many touted larger school runners, winning the well earned Overall title in 15:32. The front group went through the first mile at a conservative 5:03 but kept a steady pace throughout. Having bided his time, Kennedy waited until just before the two mile mark to make his move and take the lead. 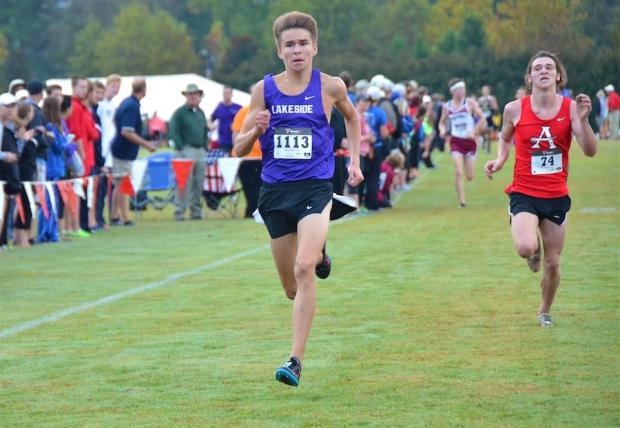 Andrew Kent continued to have an excellent season for Lakeside DeKalb, seizing 2nd Overall at 15:36. Colton Page of Allatoona had another great outing, placing 3rd in 15:38. Allen Clark of Lakeside Evans held on for 4th at 15:43, edging the ever improving Geoffrey McCullough of Campbell who went 15:44. Just three seconds back, Sam Bowie of LaGrange took sixth, followed by 800m State Champ Sam Ellis (15:52.69 ) of the Bulldogs, who outsprinted Chandler Kennedy of East Jackson (15:53.03). Sophomore Griffin McCauley posted a 15:59, setting a new Paideia School Record for the 1A Pythons taking ninth. Harry Harp, who led Whitewater to a Team victory, rounded out the top ten. 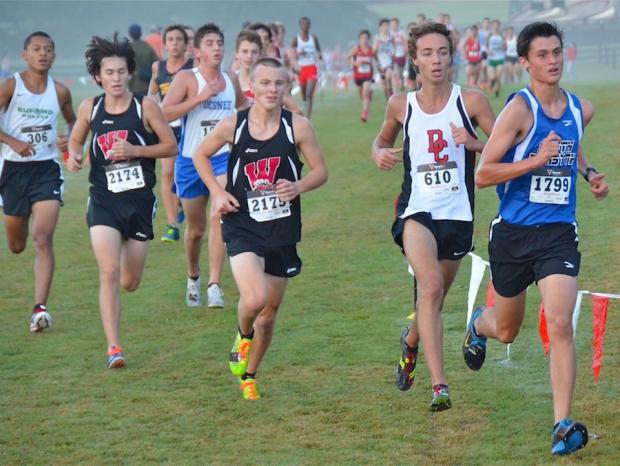 Asics seems to be a showcase for Individual racing, but 4A Whitewater prevailed again this weekend, adding another Team title to their resume with a Team total of 120. Davis County was the runner up, posting 131 points. 3A is getting a bit tighter with Blessed Trinity placing 3rd (174 points), Oconee County 6th (223 points), and East Jackson, as they continue to develop their fourth and fifth runners, taking 9th, only 24 points behind Oconee. Host Alexander was a solid 4th overall with 192 points.

Pictured is a small portion of the Championship Girls as they charge toward what will turn out to be one of the greatest races in Georgia this season. 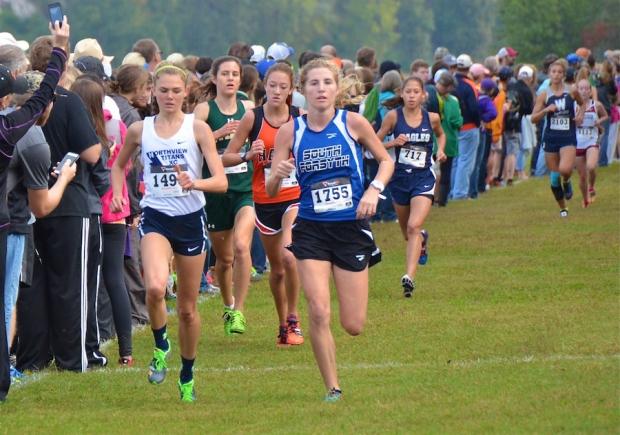 Lindsay Billings (front left) of Northview and Savannah Carnahan (1755) lead an elite group of Championship Girls past a vast wall of fans at the 1 mile mark. It would be interesting to know if either runner knows yet of the battle that's about to take place.

It's not often when the top Girls are only 1:30 back of the top Boys at the same meet, same course, but it happened. However, on any given day, someone can just have it...and Savannah Carnahan from South Forsyth 'had it' on Saturday. 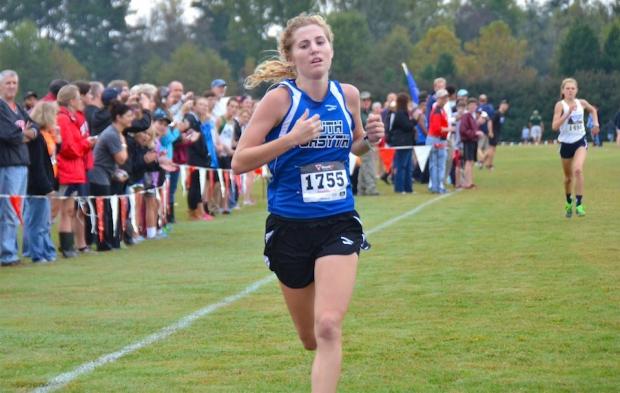 Savannah Carnahan! This could/should be considered her finest performance - Ever. Savannah posted a winning time of 17:08.72, which is the fastest in Georgia this season.

She gave Northview's Lindsay Billings her first taste of defeat in the past couple of years, and perhaps had the best race of her running career, taking first overall at 17:08 (fastest time in Georgia this season). Despite the surprise, Billings never relented during the race, pushing hard throughout and coming up 2nd in a great 17:14. 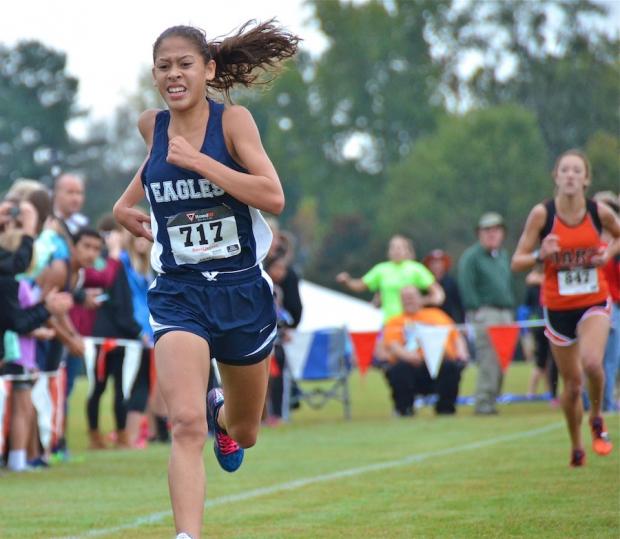 Sue Ann Morales of the East Jackson Eagles ran a PR of 18:03 to earn Bronze, ahead of Audrey Honiotes of Hart County.

Ohhhh, but was there a whole nother' race going on in a preview of what may be at AAA State. Sue Ann Morales, Audrey Honiotes, and Mary Claire Solomon had a titanic battle for AAA supremacy, with Morales from East Jackson coming out on top this day, taking 3rd Overall at 18:03. Honiotes from Hart was 4th at 18:06, and Solomon of Blessed Trinity 5th in 18:09...WOW! Be there at Carrollton, folks, for the rematches in 6A and 3A! 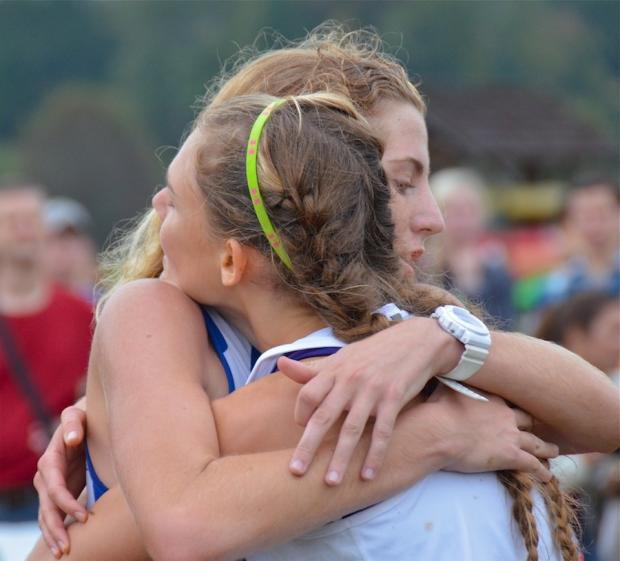 The embrace of Champions - Neither Savannah Carnahan nor Lindsay Billings will forget this day anytime soon.

Northview earned the First Place Team trophy, besting South Forsyth by 6 points in the team race. However, the gap is minimal, making for a potentially terrific showdown at State when you throw Mill Creek and Milton into the mix as well. Westminster ran really well, beating 3A rival Blessed Trinity by over 200 points. Dunwoody was the top 5A squad in 4th place, and White County was first of the 4A schools. 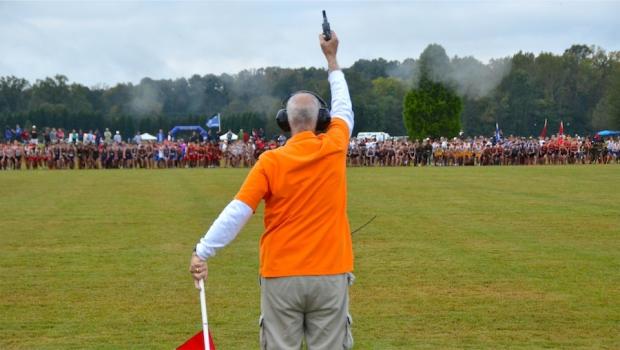 Large School Boys - Ben Davies of Holy Innocents established himself as the man to beat in AA a month away by winning the Overall, going 16:40. Northview's Varsity bested South Forsyth's JV squad for team honors with 48 points. 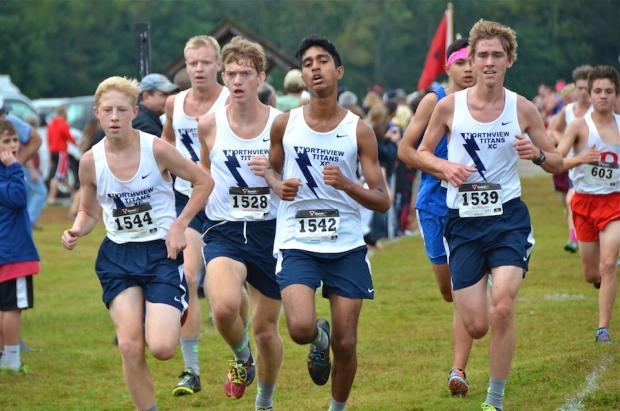 The Northview Titans ran as a Team and won as a Team in the Boys 5A-6A. 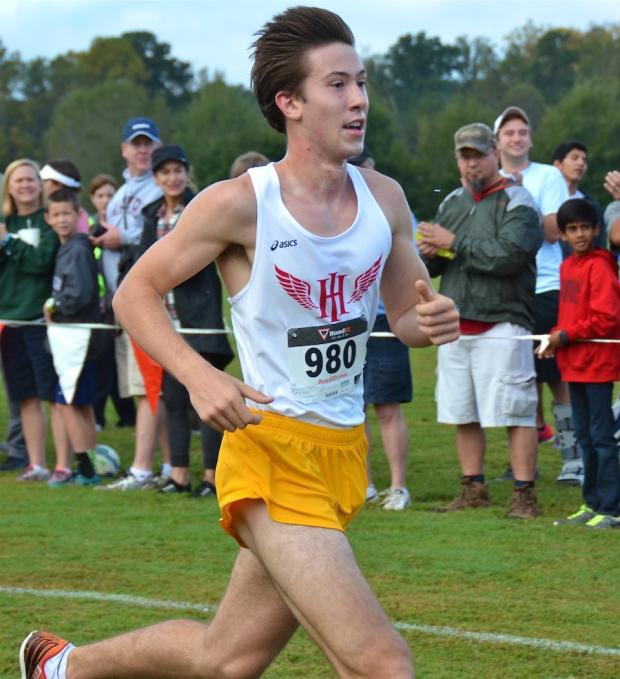 Ben Davies of Holy Innocent's Episcopal earned the win in the 5A-6A race with his time of 16:40.25 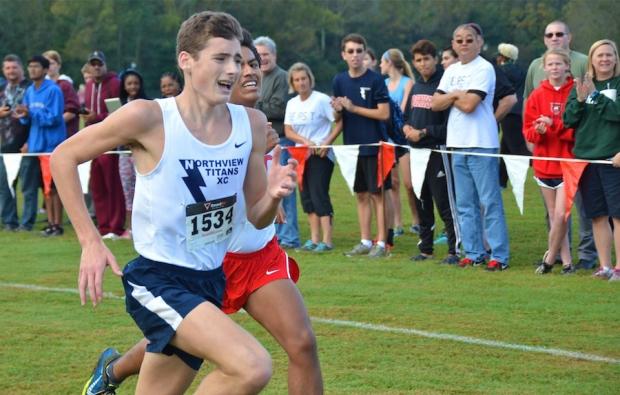 In an exciting finish, Ryan Larcinese of Northview chased down Adan Rodriguez of Dalton in the final meters. Larcinese edged Rodriguez to the line by a scant 0.31 seconds 16:49.13 to 16:49.44, for the Silver medal. 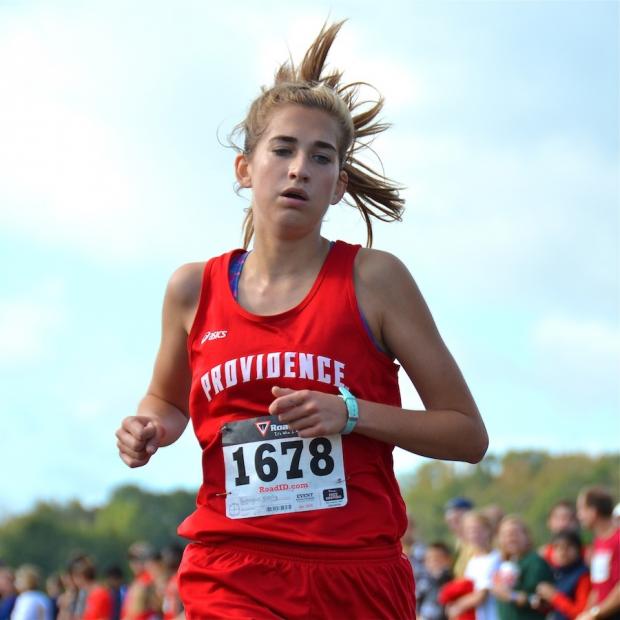 Emily Swanigan of Providence Christian earned Gold in the Girls 5A-6A race with her time of 19:40.87 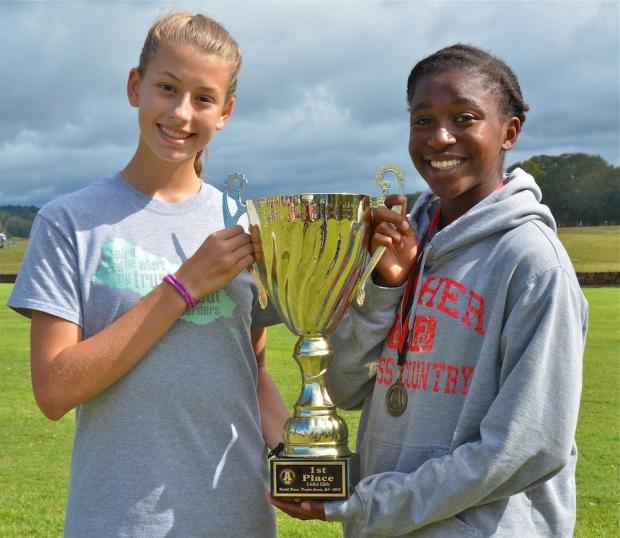 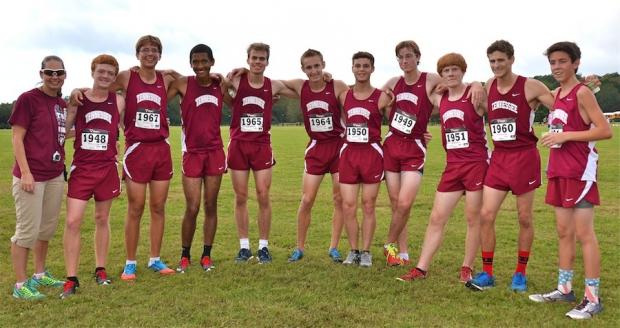 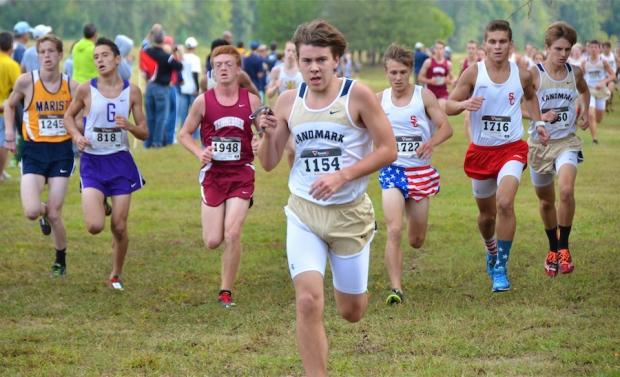 Austin Taylor of Landmark Christian (1154) leads the chase of Keenan Johnson of Tennessee at the 1 mile mark in the Boys 1A-4A race. 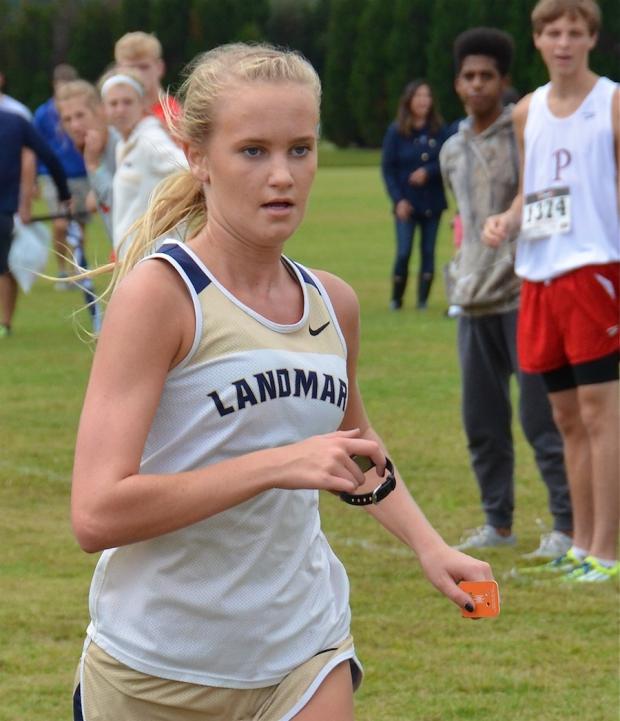 Small School Girls - Sarah Foreman is on a hot streak for Landmark Christian. Just one thing...she forgot to put her timing chip on her shoe prior to the start. Luckily, someone tossed it onto the course in front of her during the race, so she was able to pick it up and carry it across the mats making official her 1st place win in the Small School race at 18:57. The Heintz Harriers (Marist's JV squad) won the team race, with Landmark Christian 2nd. 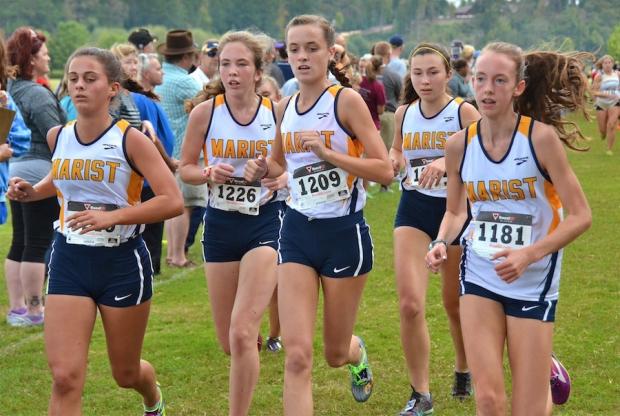 A sisterhood of Marist JV Girls came through the first mile shoulder to shoulder and went on to earn the 1A-4A victory. 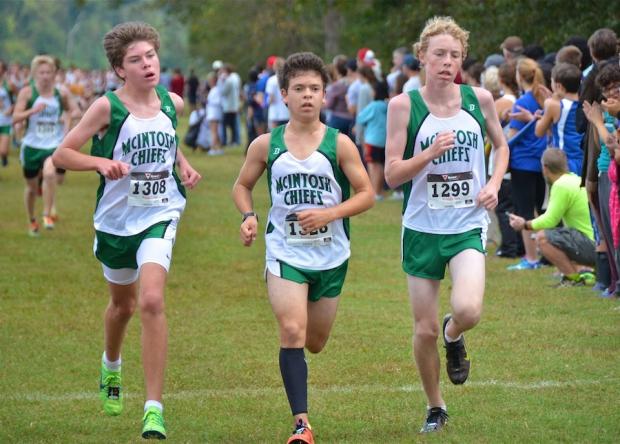 The McIntosh Chiefs dominated the JV Boys race, posting a Team score of only 17 points!

Open Mixed 5K - Did anyone notice a young small girl smoking the Asics course, going 19:28 in the Open 5K race? Well, get ready to see a lot of East Jackson MS' Jewelee Love in the coming years. She may be the favorite going in to win the MS State Medium School Girls title.