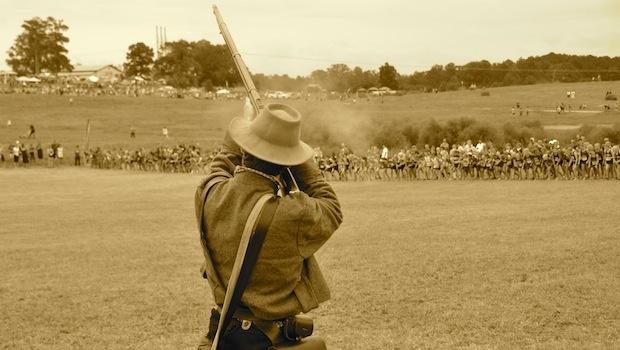 Incredible day of racing at the 2015 Saucony Battle of Atlanta as over 2900 runners tackled the pristine Nash Farms Battlefield course. Great conditions for a race in late August as it was cloudy with some breezes! A Confederate Civil War re-enactor in full regalia started every race with an authentic period Musket which made quite a boom! (ALL PICS by Daniel McCauley) 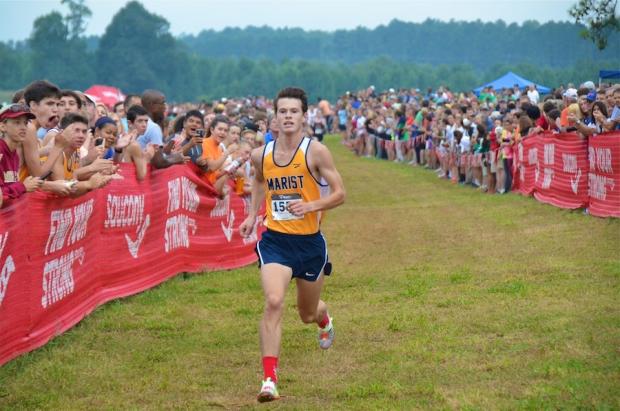 Boys: There was a solid pack through the first mile with Frank Pittman, Jake Shewbert, and Thomas Adkins establishing themselves among the leaders early including Sam Costa of Mill Creek, Thomas Moore of North Oconee as they mixed it up. Tyler Barber of Mountain View started out a little farther back, but moved up throughout the race. 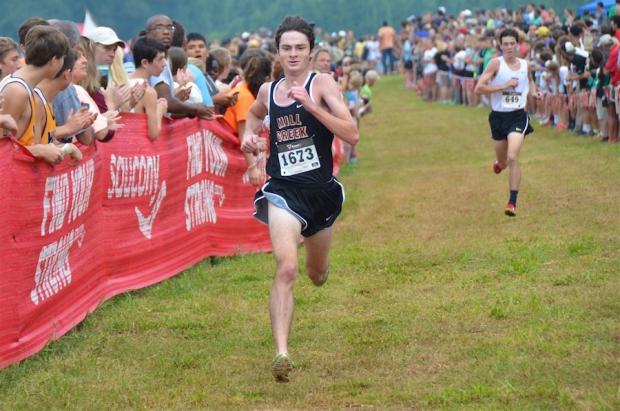 By the 2 mile mark the lead pack whittled down to Pittman, Costa and Shewbert when Pittman broke away just past the 2nd mile mark. He stayed steady, never looking back in control the whole way pulling away with relative ease winning going away in 15:53 (a time 2nd only to Footlocker Finalist Brad Hort who ran in the 15:40's on a slightly different layout and a late September race date). Pickens' Sean Parker ran a good race to nab the 4th spot. Thomas Adkins (Hawaii transfer) got a taste of some 'Gawga' XC competition and thrived placing 5th in 16:29. Mill Creek Sr. Noah Hollis bolstered Mill Creek with his 6th place effort in 16:33. Very impressive was top Soph Jacob McLeod from GISA Trinity Christian Dublin coming in 7th at 16:34 (could he be better than older bro Kaleb?) North Oconee's Thomas Moore was 8th (16:34), Connor Lambert of Etowah 9th (16:35) There was a mad dash for the last coveted top 10 spot, with Tyler Barber taking it with his patented kick. 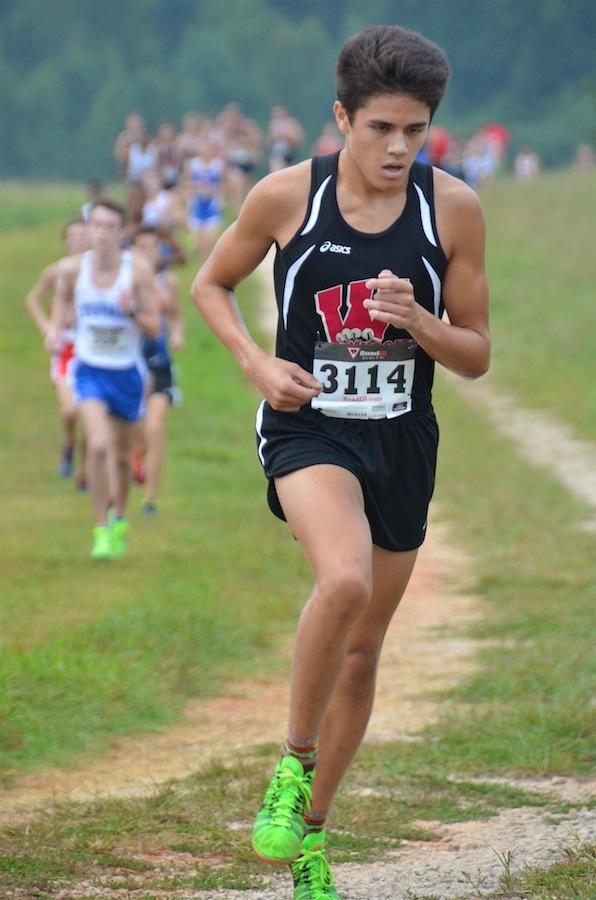 In the team battle, the front of the race was much different than for the trailing pack, as Pius X early looked to be in the lead with other teams closing in. But, Mill Creek's strength separated the 6A powerhouse from the top 4A schools as the Hawks controlled the race and pulled away pretty easily earning a clear victory over both Marist and St. Pius. Marist and St. Pius X had a good team duel, but the War Eagles had a better 1st and 5th which made the difference for 2nd. Whitewater placed 5th overall behind Auburn (AL) and North Oconee seemed to have a tough day placing a distant 6th. 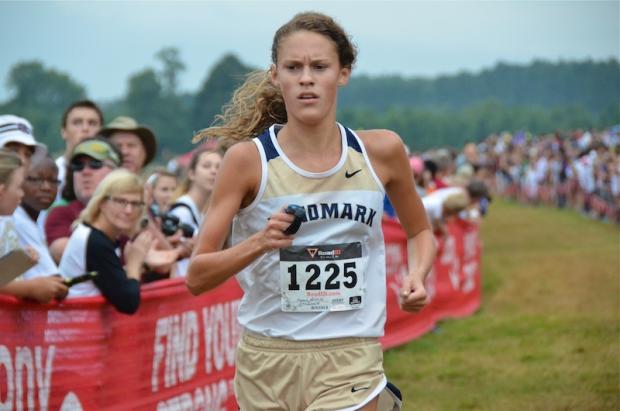 Girls: Nicole Fegans of Landmark Christian took it out hard from the gun and Marist's Josie Wirtz gave chase from the get go. Faegans was uncatchable and the hot pace caused Wirtz to fade on the 2nd 2K loop, eventually being passed by Hooker and Anna Hayden of Riverwood before she reacted and passed Hayden back. The rest of the Marist pack moved up very well during the 2nd 2k loop to secure the team victory. Etowah was packing it in very well and impressive with their depth. For the most part it was a race of #1's as nine teams had a runner in the top 11. 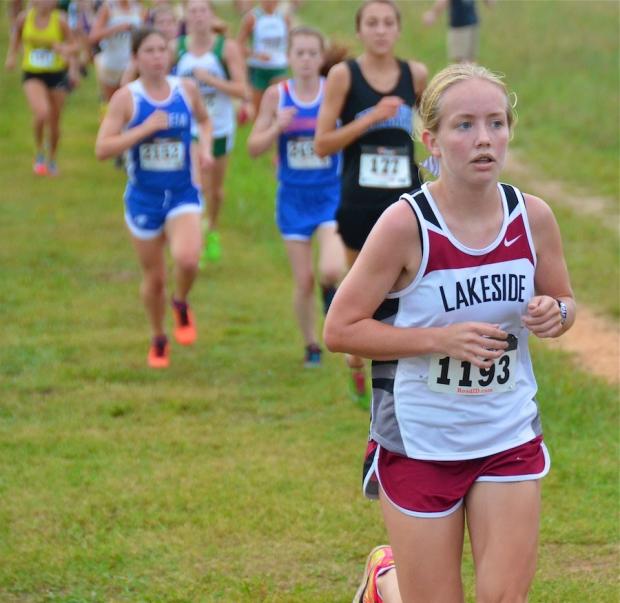 Nicole Fegans had a great race breaking away from the tight chase pack winning easily in 18:53. Alyssa Hooker of Lakeside Evans was back in 8th place at the 2 mile mark but steadily worked her way past 6 runners the final mile to take Overall runnerup in 19:16. Wirtz hung tough for 3rd place leading Marist's efforts clocking a 19:20. Anna Hayden of Riverwood was 4th overall at 19:26. The next 4 Girls were within 5-10 meters at the finish including Myriam Alvarez of Marist (19:45.13), Sophia West of Paideia at 19:45.69 (in her first GHSA Cross Country race), Macki Walsh of Etowah 7th (19:46.42) and Katie Meyer from Centennial at 19:46.70. Kathryn Foreman did not race and Landmark Chriatian only had 4 runners finish having no team score. 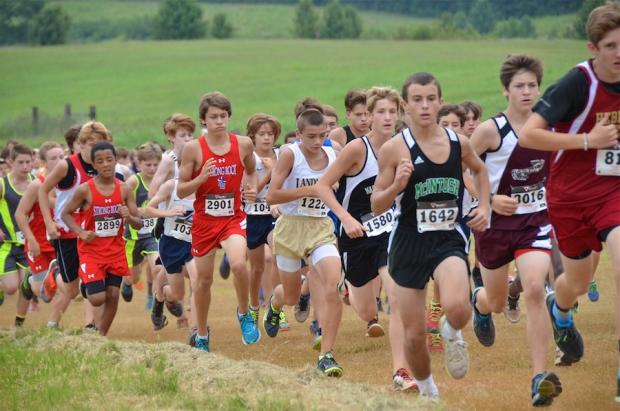 7th Grader Zach Pruitt of Landmark Christian (center-1222) soon got out of congestion and said goodbye to the pack after 800 meters winning the MS Boys race in 10:29

400 MS Boys participated in the MS Boys race. All the field got to see after 800 meters was Landmark's Zach Truitt's back as he separated from the lead pack for a comfortable :17 win in 10:46. Bryce Jeffrey from Etowah was a strong 2nd at 10:46 followed by Hebron Christian's Blake Fugel in 3rd at 11:02. Woodland Euharlee MS took the MS Boys team title without placing a single runner in the top 10 places. Holy Innocents took 2nd, followed by (I guess) McIntosh HS' MS feeder program. 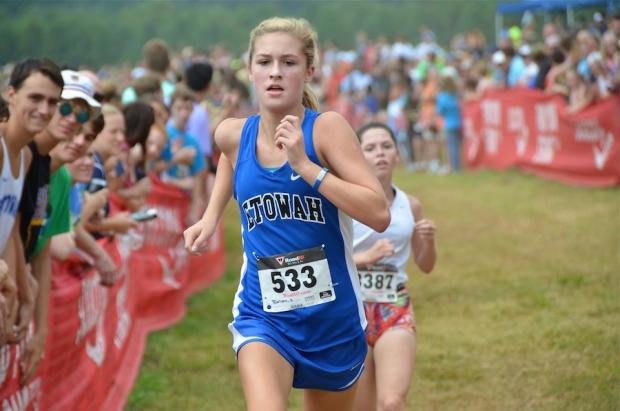 The MS Girls race was a duel between longtime friendly rivals Sydney Runyan and Faith Bobak (both who have ran for Etowah Youth) and it came down to the wire as usual with Runyan taking a narrow victory clocking a 11:24.55 to Bobak's 11:25.84. Rylee Evans of MS Girls Team Champ Woodland Euharlee placed 3rd in 11:44. Lovinggood MS took home the 2nd place hardware followed by small 1-A Private Hebron Christian. 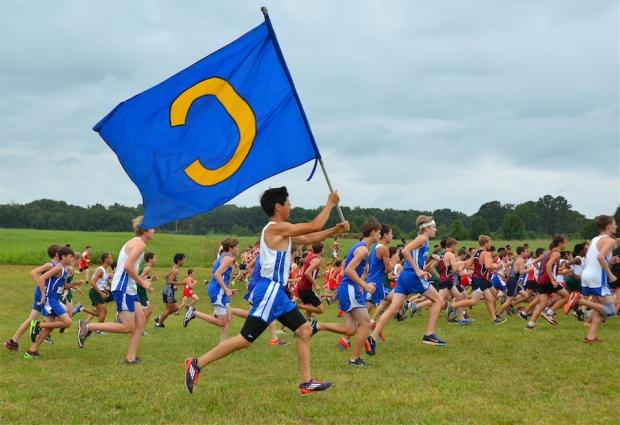 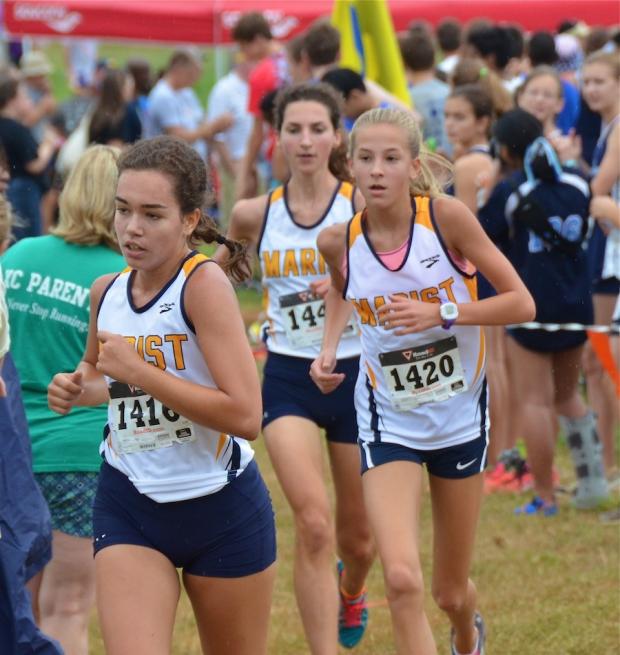