(all pics and caps by Dan McCauley) 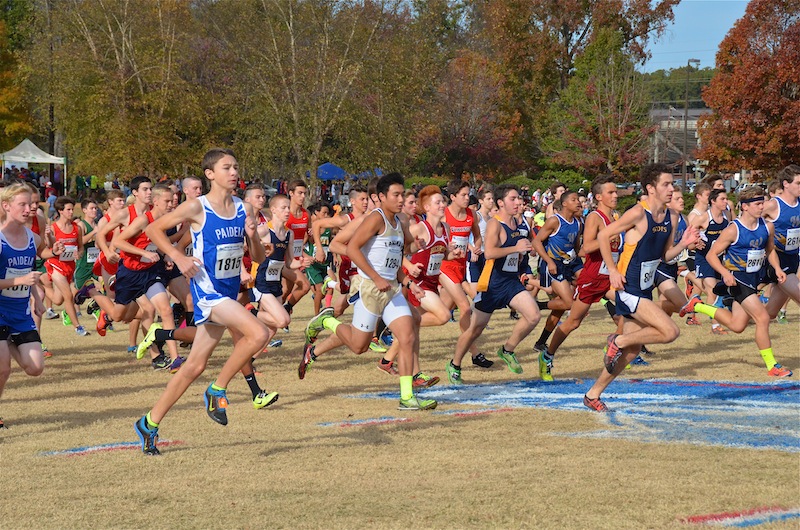 CHARGE!  The 1A Private Boys attack right from the gun.  16 schools made up the field of 115 enthusiastic runners, including the one who would post the fastest time of the day 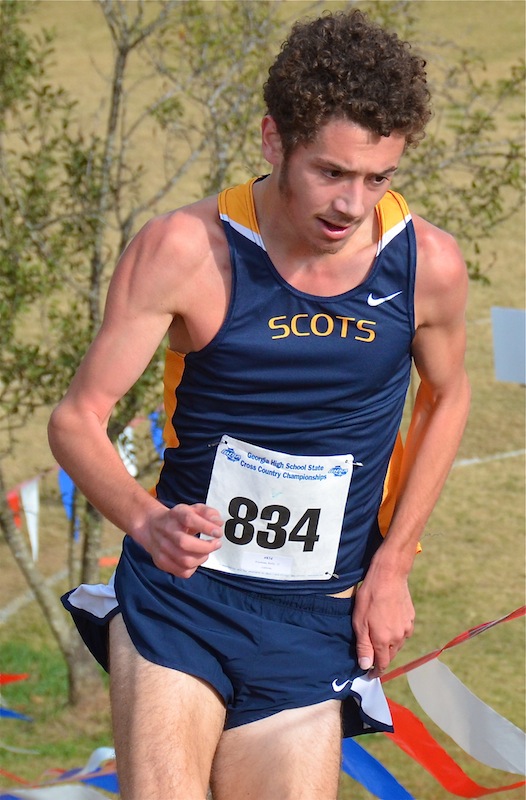 The concentration on Reilly Friedman's face says it all - he was focused on doing something special, making this final race in his Galloway singlet a State winner.  Friedman was the only runner to crack 16:00 minutes on the challenging Carrollton State course, 15:52.43 to be exact.  Reilly, THANK YOU - GOODBYE!

At the crack of the gun the boys were off almost forming a V formation heading to the first slight veer to the left.  Colson Hagan of Hebron sprinted out to a brief lead as Friedman smoothly moved along. By the double street crossing in the team tent area Friedman had firm control of the race (around 3:05) with a near 40 meter lead. Robby Keough of Whitefield Academy was in pursuit having gapped Adam Hearn of Athens Academy, with Griff McCauley trying to go with along. the next 6 runners were in tandems including the Hebron duo of Hagan and Trent Johnson who began working together as a strategy.  Will Martin from First Presbyterian Day seemed to be biding his time in a semi 2nd chase pack perhaps saving something for later. Passing around the Band field at 6:05 Friedman was just motoring around turns increasing his lead to over 50 meters as Keough kept his separation by 35 meters over a forming chase pack of Hagan, Hearn, Johnson, Lewis Brooks of Lakeview. McCauley began to gradually fall off the upperclassmen's pace and Martin of FPD was making his way steadily towards the pack. 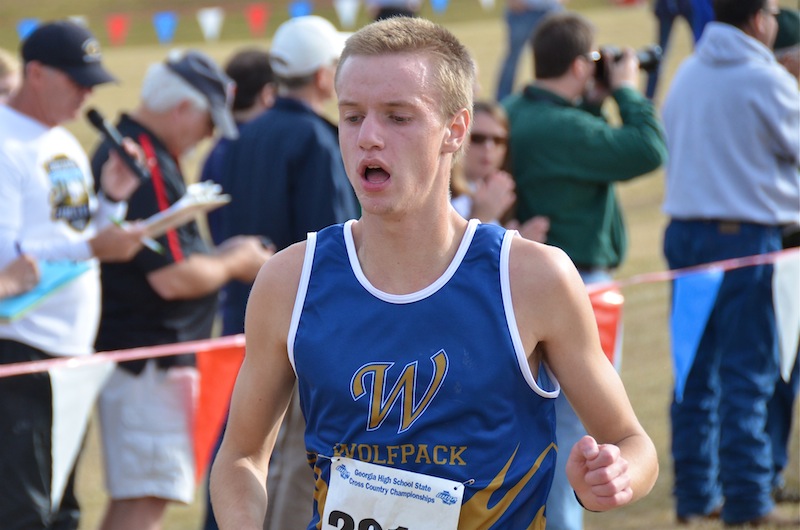 Robby Keough has earned the Runner-Up spot for the second year in a row in XC, in addition to being the State Track Champion in the 800m & 1600m in 2014
Reilly began the 2nd loop moving effortlessly as Keough had just crested the big hill nearly 100 meters back, though comfortably ahead of the chase pack who had been joined by North Cobb Christian's Sam Shaylor. Martin began to overtake McCauley just before the right turn and Henry Choi of Acad was running aside PCA's Duncan Gotfredson. Hebron's 3-5 runners had tightened up in the next group 20 meters back working together. Friedman moved past the 'Fort' on the Band field at 13:40 on another planet looking relaxed and confident now with his mind on '15:51'.  He charged up 'Separation Slope' turned left and put it in another gear...now looking very fast. Keough maintained a gap just before ascending the Slope over the Hebron duo of Hagan and Jones who looked very determined to complete their mission of giving the Lions an early lead in team points. Brooks and Hearns were securely 5th and 6th with Martin 40m back. Galloway's 2&3 emerged in the next 15 spots needing to make a move the final 450 meters. The thinned out crowd saw the large display clock and began to urge Friedman on as he sprinted across the mats in the Top Performance of the Day in 15:52.  (1 second better than Sukhi Khosla's (of Leon Tallahassee) time. Khosla is a major contender to Q' for Foot Locker Nationals.  Keough took 2nd at 17:02. Brooks made a late run passing the Hebron duo taking 3rd at 17:13.
Team Race 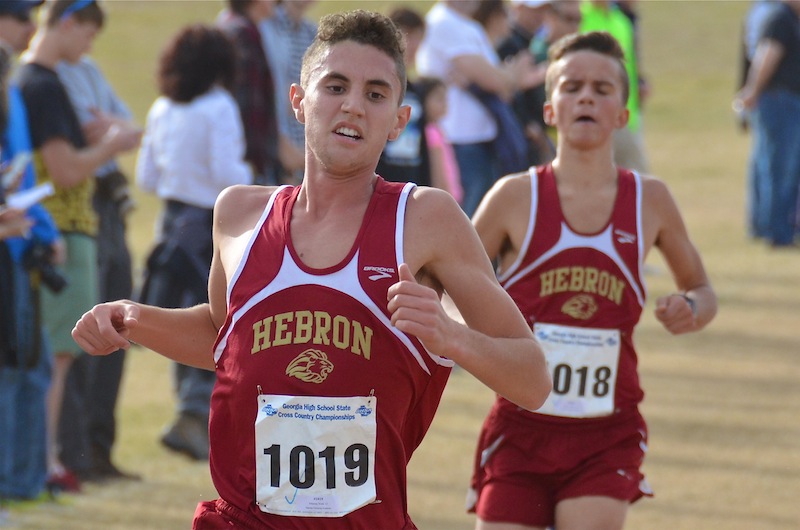 Trent Johnson & Colson Hagan of Hebron Christian took 4th & 5th to secure the overall 1A Private Team trophy for Hebron
Really the individual summary tells alot of the tale of what happened on the front end. Hebron and Galloway looked to be evenly matched from region meets. But on this day the Hebron guys ran in 2 distict groups. You had Hagan and Johnson doing the heavy lifting up front scoring 9 points and the trio of Wesley Warbington, Drew Murphy and Peter Marty doing the Yeoman's work which paid off in the currency of the 1A Private Boys team title.  Galloway's 2nd troop of Scots did finish before the Lions trio as Alex VanSchoor and Aaron Earl crossed the mats together at 18:20 good for 13th/14th.  But Providence Christian was having none of that as they closed hard the last mile led by Gotfredson's 10th in 18:07 and Sammy Clough's 12th at 18:16 sparking the 'Storm' to overtake Galloway seizing 2nd teamwise by 4 points.  Athens Academy was 24 points back led by Hearn's 6th in 17:22 and Jihoon Choi who ran like a man possessed the from the Band field passing many runners for 8th overall at 17:56. 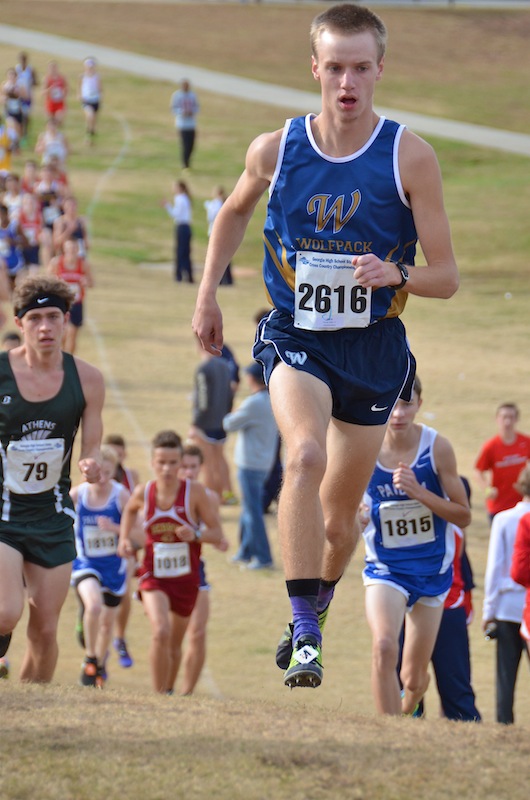