3A Boys- East Jackson, Blessed Trinity Take It to the Limit 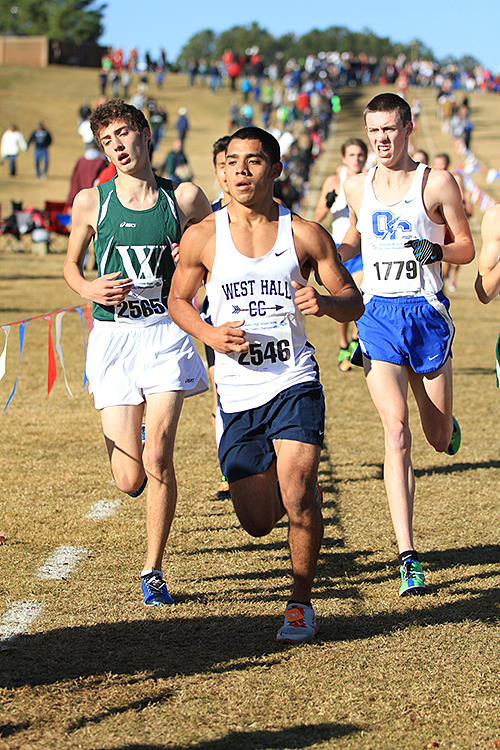 These were intertwined with all 4 top ranked squads having runners talented enough to win the race on 'Any Given State Saturday' as these races can be so unpredictable. At times many different runners held the lead (some for a brief period of time) It was announced Graham Huff of Westminster also led for a while.  But on Mile 3 East Jackson's went  to work moving out with Oconee County's Michael Hans forming a foursome much like the Region 8 race. New transfer (Jacob Burgamy now of Washington County) did his best to hang with the GHSA gang but fell of the pace gradually.  Fortunately for Blessed Trinity Ben McCoy also kept his pace around 40-45 meters back as each team member was aware of how crucial 1 spot could be with any of their top 5's (and 6's...) After cresting 'Separation Slope' at the Band Field, it was all East Jackson and Hans of Oconee the final 350 meters.  Chase Kennedy (one of the twins) separated and shot up the final hill and raced down to the finish placing 1st in 16:42 earning the Overall title. 50 meters back bro Chandler (who is like a racehorse still learning to run) battled down the hill with Hans to the last meter taking 2nd in 16:50 with Hans a step back in 16:51. Senior Noah Hulett kept grinding away securing 4th giving the Eagles a much needed early advantage (3 amigos= 7 points)  Meanwhile the race momentum began to shift after Burgamy took 5th (17:05) Huff 6th (17:11) and Ben (the real) McCoy clocking out for Blessed in 7th at 17:17 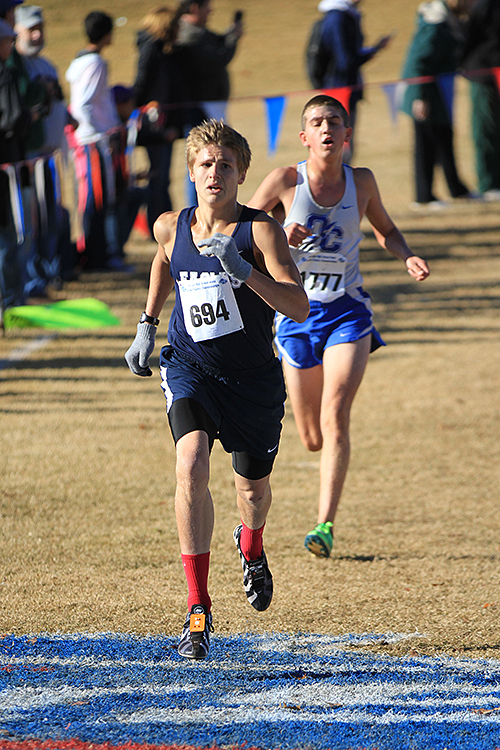 Then the worm began to turn in the Titans favor as their next 4 runners after McCoy taking  9th (Robby Gipson), 12th (Leo Pryor), 15th (Andre Rodriquez) and 17th (Chaise Burran) putting them right back in the wild race for the 3A Boys team title.  Westminster was now out of contention for the big prize at this point but pushed on for the 3rd place Podium spot denied of their 27th? team title.  East Jackson still had a shot with their 4 and 5 working their way down the final hill securing the 23rd and 30th spots.  All the Coaches involved knew it was going to be a tight one as after 5 runners it was 60 apiece....Never, never say 6th and 7th runners do not matter as Blessed Trinty's 6th (Brennan O'Connor) crossed 26th winning the 6th man tiebreaker giving the Titans a well deserved team title.   Oconee County led by Han's 3rd overall and 22,28,30  almost got some payback on Westminster from back in the day falling 3 points short, but taking the 4th and final Podium spot. Savannah Arts lived up to their ranking 64 points back in 5th followed by a Coahulla Creek squad at 6th.  Individuals rounding out the All-State 3A  oys team were: Jose Diaz of Banks County 8th at 17:22 and Decatur's Sam Ellis 10th in 17:30
COMPLETE RESULTS
COMPLETE COVERAGE
PHOTO GALLERY
Tweets by GAMilesplit