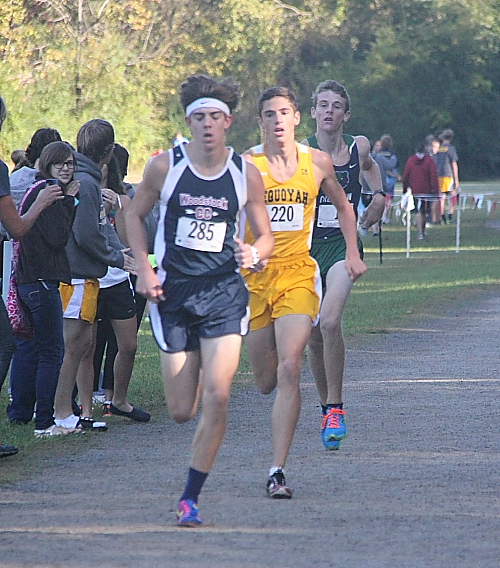 In the individual race it looks like it could be a great 4 school matchup between Etowah’s Michael Perona, Woodtock’s Owen Baily, Cherokee’s Taylor Scarbrough, and Creekview’s Brennan Garriques. Both Bailey and Garriques have sub 16 minute PR’s from last season and they were joined recently by Perona who ran a 15:55 at Wendy’s Invitational this last weekend. Scarbrough also set his 16:08 PR last weekend at the Westover course. In 2013 Bailey managed to outlast 2 challengers, Sequoyah’s Chris Costa and Garriques; can he beat three this year? And not that he is likely to challenge for a title, lookout for Freshman Phenom Zac Cantrell. He is currently the fastest 9th grade boy in the county and may break under 17 minutes this Saturday joining some of the states elite freshman.
Varsity Girls Individuals
Last year, the Etowah girls were dominant, led by Kingsley Green of Etowah, who beat out Alexandra Melehan of Woodstock in a photo finish for the crown of County Champ.  Then, 3 of the next five runners were Eagles which allowed Etowah to run away with the team title, 29 to Woodstock's 52.  This year looks like a replica of last year with Kingsley and Alexandra again battling it out for the county title.  Also looking strong for a top 5 finish, Cherokee's Caitlyn Farrell, who will run for the 10th official race of her career on her home course.  Kyla Resnick and Shelby Rensel of Etowah are also having strong seasons as the pair of juniors look to beat their low 19 PRs.  Finally, first year junior, Lauren Wallin of Creekview may surprise.  Two weeks ago at Darlington, she beat Farrell at the line, so will be looking to add her name to the county elites.
Varsity Teams
For the Girls team title, it looks like a run for second.  6A Etowah is too strong at the top to be contended with.  It would be an upset of the ages to have the Lady Eagles dethroned this year.  The race for 2nd should be interesting between 6A schools Woodstock and Cherokee and the #3 ranked 5A school Creekview.  Creekview squeeked out a win over Woodstock at their inaugural race, Fairways, while beating Cherokee at both Darlington and Pickens, however, Cherokee runs best on their home turf while Woodstock has since seen the rise of freshman, Hannah Everest, which will help them in scoring.
Sounds repetitive, but Etowah’s boys team with its depth is easily the favorite. They convincingly bested Cherokee (even if they had raced their #1) at the Warpath Invitational in September and currently have a 16:24 team average. The Eagles have 6 of the fastest 10 times in the county. In fact if the Eagles rested their top 4 boys from the competition they would still have 3 of the top 10 times and 5 in the top 13, still keeping them race favorites. So… the race for 2nd place seems like a grudge match between Cherokee, Creekview, and Woodstock. The Grizzlies have been only narrowly defeated by both Cherokee and Woodstock so in the small 6 team race it may come down to one runner; that is, of course, if each coach feels it worthwhile to race his top kids. When looking at other County races like Forsyth and Fayette County, some of the State’s top ranked teams rested their top kids, to avoid over-racing as the season begins to peak. River Ridge will be missing its two top boys do to SAT testing so they will likely not be a factor this year. After last season’s success Sequoyah is in, what some would call, a rebuilding year.
JV
In the JV girls race, Etowah's domination may be near an end as both Creekview and Cherokee have deeper rosters than in the past and have runners to push the Eagles.  8th grader, Sierra Blanton, of Cherokee has had some quality runs at Boling and Darlington and may shock the field with an unexpected win.
Tweets by GAMilesplit