Mustafaa and Tripodi Get Crackin' at Westover

All Images by Daniel McCauley

Former 2A "Runner of the Week", Serena Tripodi led The Lovett Girls Varsity Team to victory.  Facing into the glare of the rising sun, six front runners in the Girls Varsity race immediately took control on the wet grass and began to establish an early lead over the 304 competitors. 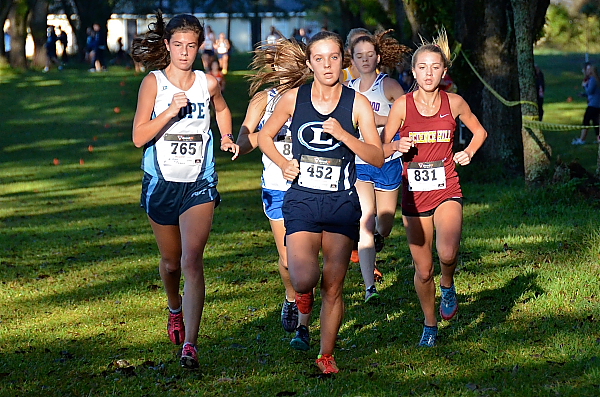 The Lead Pack is off and Running In the Girls Varsity Race led by Tripodi (Lovett)
The super sextet included Halle Hausman of Science Hill, Ashley Kehoe of Pope, Tripodi, Riverwood International Charter School Teammates Elizabeth Graves and Anna Hayden, and Colquitt County Frosh Elizabeth Funderburk.  Sitting in third place as the group cruised through the first mile at 5:41, Tripodi was biding her time.  "Let them do the work," was the strategy she confided at race's end.  As the girls wove through the pecan trees on the second loop, they settled into a more comfortable pace of 6:10 for the second mile. 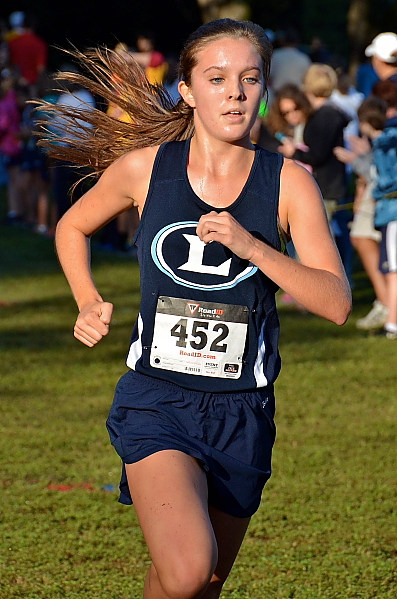 Tripodi puts down the hammer in the 3rd Mile  winning by :17
During the third mile, Tripodi made the decision to make her move.  "I just hammered it," she explained with a smile.  Tripodi's winning PR time of 18:43 was 17 seconds ahead of Hausman (18:40), and another five seconds back was Kehoe (18:45).  Running smartly, Funderburk finished in front of the Riverwood duo of Hayden and Graves, but it was North Gwinnett High School that took third in the Team competition with 126 points, behind Pope with 96 and Lovett with 59.  Science Hill came in fourth with 146. 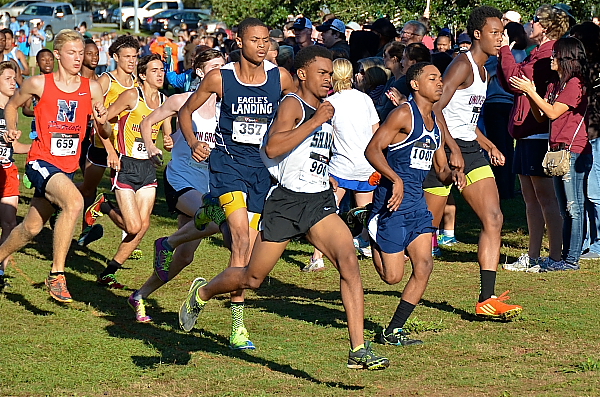 In the Boys Varsity race, the reigning champion, Shaw's Hakeem Mustafaa, was highly motivated to defend his title.  However, this was not to come without a battle, as 379 participants were off like a shot at the sound of the gun.  Going out hard and getting to the front proved to be particularly beneficial as, just a bit back in the pack, there was elbow banging, pushing, and shoving. 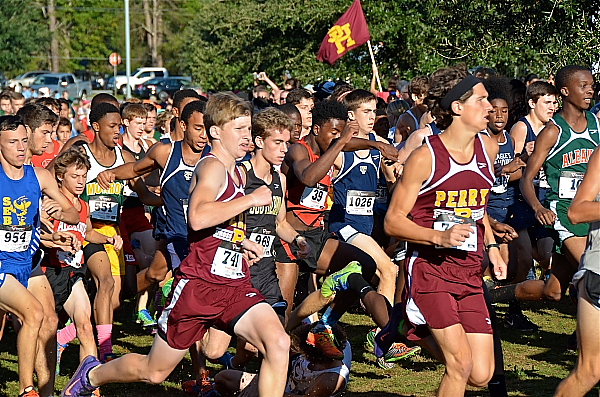 In a 2 Shot Sequence, a Lovett runner goes down in heavy traffic as 379 Varsity Boys Stampede to the 1st turn 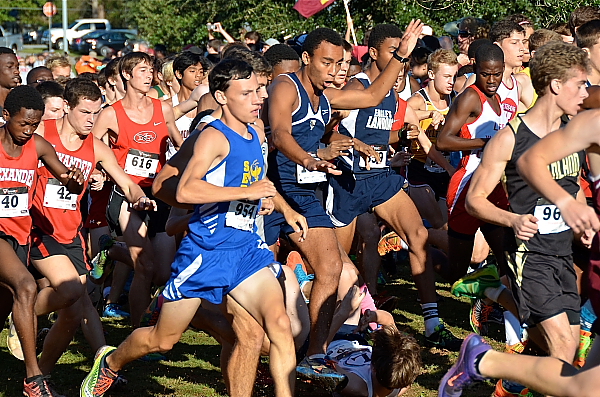 Man down!  At approximately 120 meters, one of Lovett's top runners fell.  Several competitors did a tremendous job using hurdling skills and acrobatic maneuvers to keep from trampling the unfortunate runner.  Those who had sprinted to the front avoided much of the chaos behind them. 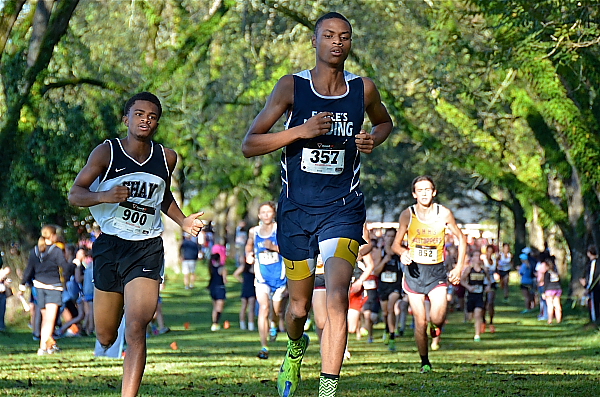 By 1200 meters, 4A 800m Track State Champion, Devin Dixon of Eagle's Landing, took control, with Mustafaa on his heels. These two leaders blazed through the first mile in a blistering 4:49.  Five or six seconds behind, 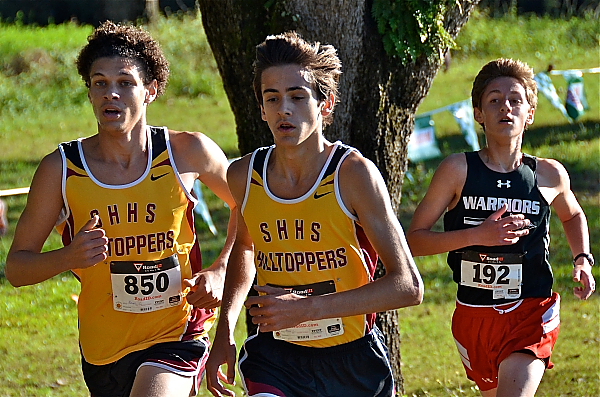 Science Hill boys, Noah Charles and Alex Crigger, were working together to run a very smart race.
They were followed by Cherokee's Taylor Scarborough and Griffin McCauley of Paideia.  This extremely fast first mile was sure to lightly roast many of the runners, including some of the top contenders.  On his way to the second mile, Mustafaa kept on cooking and pulled away from Devin.  Meanwhile, Charles and Crigger continued to roll as they overtook Devin right before the two mile mark.  The Science Hill Dynamic Duo ran side by side to the very end, both earning PRs with their finishing times of 15:58 (Charles) and 15:59 (Crigger), eight and nine seconds behind Mustafaa.  Meanwhile, Scarborough moved up to fourth with a PR time of 16:08, and Devin courageously persisted to keep fifth with 16:19.  Perry High School senior, Rob Ray, was sixth with a PR time of 16:27.  He had done an excellent job working his way up and holding off a pair of Smith Station teammates, Brandon Bennefield and Jerric McCoy who both charged in at 16:28, securing their team's overall win. 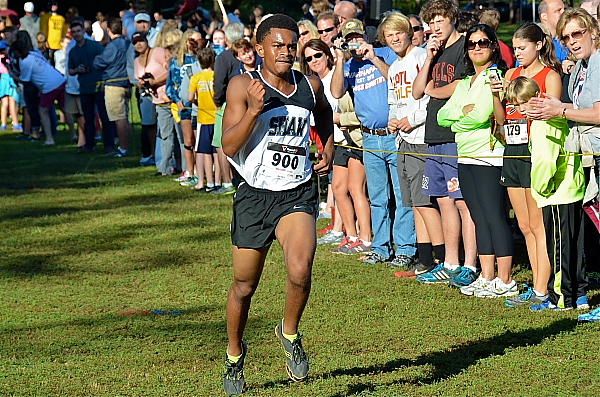 Although Mustafaa's 15:50 was :13 seconds slower than his last year's winning time of 15:37, he was nonetheless satisfied.  "It was slippery and muddy," he remarked, "but it [Westover] is still one of my favorite races." 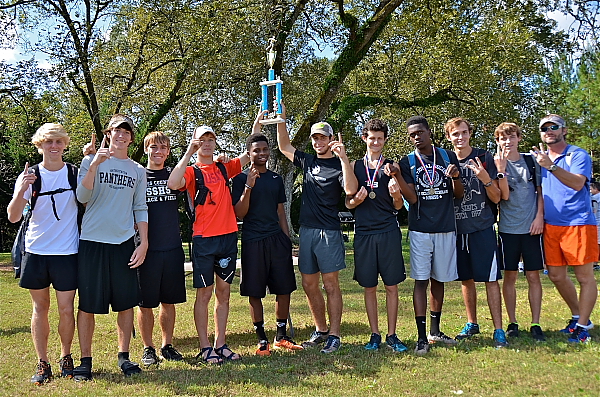 Smiths Station Boys Again Take Top Hardware back across the Muddy Chattahoochee and Timeline
The Team competition was close.  Despite Science Hill's top runners, who had come all the way from Johnson City, Tennessee, Alabama’s Smith Station had enough depth to post a total of 97 points, a mere 4 points ahead of Science Hill.  Scarborough led Cherokee to third with 124, again only 4 points ahead of the next team, Alexander. 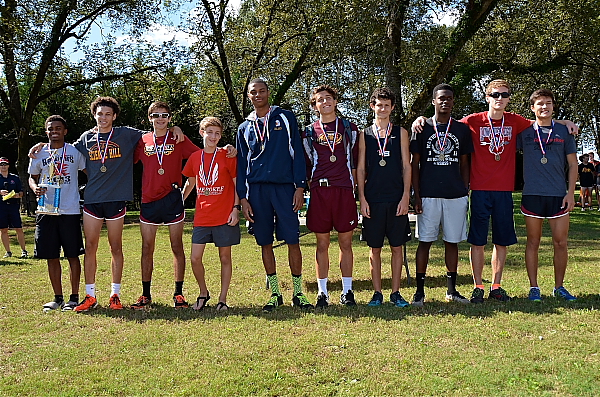 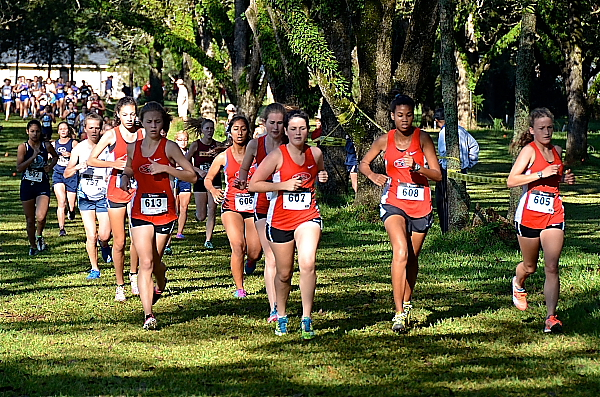 The JV Girls race looked like a North Gwinnett Team group run as their entire JV Girls Team smothered the whole front of the race.  It was not until roughly two miles in that Lovett's Stuart Ingram put an end to North Gwinnett's kumbayah moment, breaking through their stranglehold, working her way to the front, and creating a small gap. 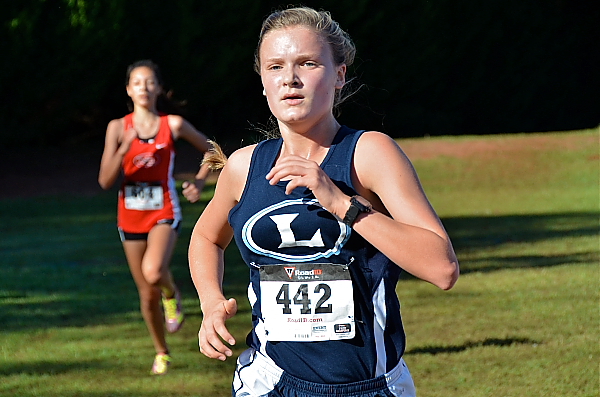 Lovett's Stuart Ingram holds on to the lead winning the JV Girls race in 21:18
Catherine Galindo of North Gwinnett fought back with defiance to make Ingram push it all the way to the line, but Ingram held on to her lead with one second to spare, finishing in 21:28.  The North Gwinnett Girls Team dominated the rest of the medal haul, placing seven girls in the top ten, including Kaitlyn Jones in third (21:42), Brittany Pace (21:44) in fourth, and Abby Niersbach (21:54) in fifth. 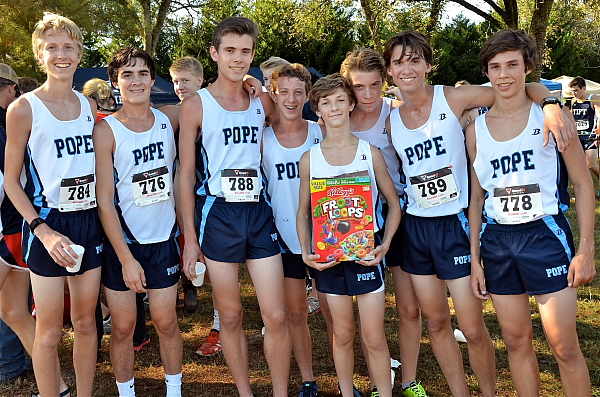 The Pope High School Boys JV Team revealed two of their secret weapons at Westover, Josh Seiden and Kellogg's FROOT LOOPS.  At the start of the JV Boys race, Brannon Moore of Smiths Station took the early lead, chased by Science Hill's Dan Henderson, Seiden, Henderson's teammate Alexander Shipley, and Justin Gill of North Gwinnett.  They battled over the first half of the course, but, going into the two mile mark, 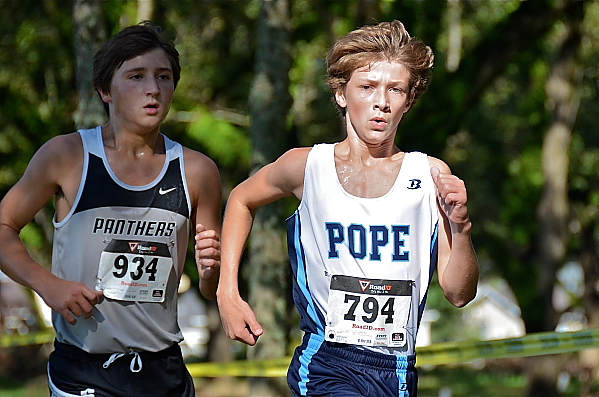 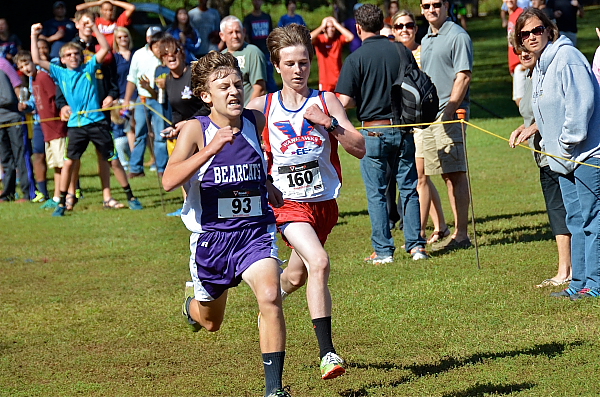 Caleb Harris from Bainbridge MS outsprints Nikolas Rowlands of Bonaire for the MS Boys Overall title
Perry Middle School and Mossy Creek got the party started with a contagious rhythm of synchronized clapping as all 219 Middle School Boys and Girls lined up to race together.  When asked if they do this at the start of every meet, the answer was, "No, but I think we just started a new tradition."  The highly charged pack stormed across the field to the first turn, after which the group quickly strung out over the single lap course.  It was an exciting finish for the boys.  With approximately 200 meters to go, Bonaire's Nikolas Rowlands made a move and took the lead from Caleb Harris of Bainbridge.  He looked to have the win, but Harris dug deep to deny Rowland's efforts and responded with an extra burst of energy which carried him over the line in 9:44, just one second ahead.  There was a bit more space between the next set of finishers, Westover's own Henry Plowden with PR 10:06, Silas Franklin (10:10), and Nathan Butts (10:25), both of Smiths Station. 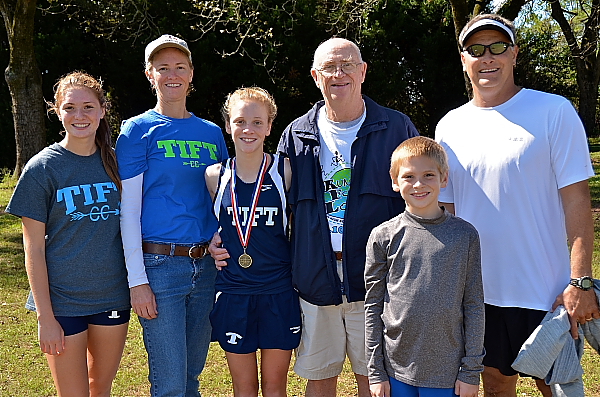 Emily Golden of Tift Middle School poses w/ her family after winning the MS Girls Overall title.
Living up to her name, third generation runner, Emily Golden of Tift, put in an impressive performance, placing twelfth overall amongst the combined girls and boys and handily winning the Girls race over first year cross country competitor Alyssa Mountie of Mossy Creek who crossed the line in 11:14.  Caroline Vickers of Tift and Perry's Laleh Kovac battled for bronze down to the wire, Vickers, with her 11:27, just grabbing third by one second over Kovac (11:28).  Kelsey Morse of Viking rounded out the top five at 11:37.  The next stop for many of these talented middle school runners will be the GA Middle School State XC Championship in Cochran. 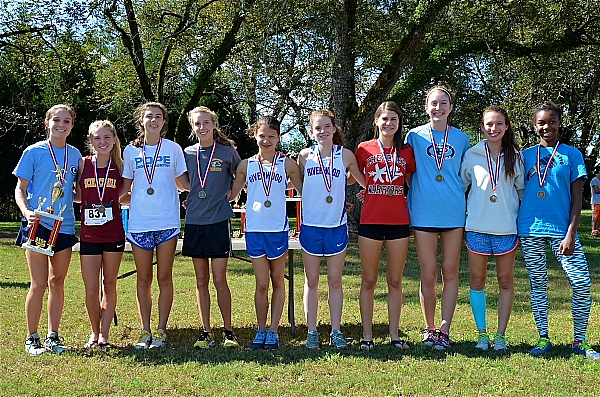 Varsity Girls Top 10 Medalists
The 33rd Annual Westover Invitational certainly should be recognized as one of the most popular and well-attended premier XC events for this area.  In fact, due to the overwhelming participation, including out of state teams from Alabama and Tennessee, as well as North Georgia teams who travel for hours and make it an overnight trip, meet director Harley Calhoun may want in the future to consider having a separate Championship and Varsity race or limiting Varsity Teams to top seven rather than ten each.  Nevertheless, Calhoun did a terrific job keeping the event on schedule, and coaches will be looking forward to their runners posting fast times here again next year.
COMPLETE COVERAGE
Photo Galleries:
33rd Annual Westover Invitational by onepointfour
33rd Annual Westover Invitational by onepointfour
Tweets by GAMilesplit