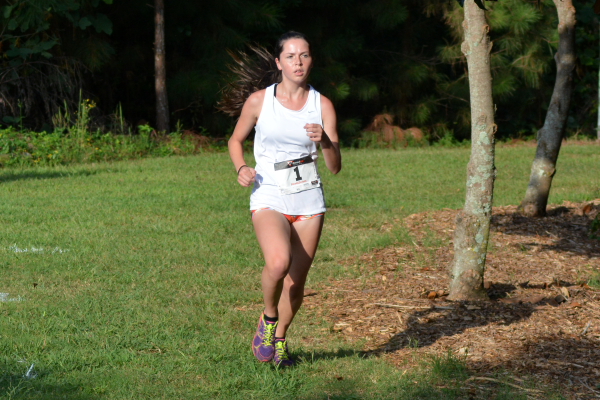 Faith Bobak emerges out of the 'Pines Lanes' with a wide gap on the pack (11:33)  pic by crazychuck

Holy Innocents teams got a good look at the course very early as their MS Girls were too deep for some good teams making them a contender to win the Small School state title down in Cochran 4 weeks from now. Their top 4 girls placed in the top 11 team slots for a 14 point win over Team Fusion. Leading the pack for the Golden Bears were Katie Waters and Eliza Harman as both clocked 12:34s placing 5th/6th. 7th Grader Faith Bobak of the Etowah Track Club took the overall title in 11:33 (would have earned her 9th in the Boys race) Piper Kay (12:00) and Bryce Phillips 912:14) of Team Fusion were 2nd and 3rd overall. Macy Moe from Bleckley County was 4th overall at 12:27. Athens Christian took back the 3rd place Team Cup with 76 points followed by Bleckley MS in 4th. 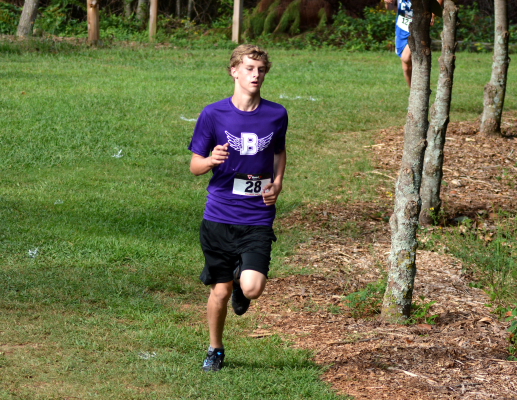 The MS Championship Boys were up next and Holy Innocents again just had too many runners packed togther (:55 1-5 Split) with 3 athletes in the top 9 positions. Leading the way for the Golden Bears in 3rd place overall was 7th grader Owen Malcom in 11:07. C.J. Rich from Bleckley MS is now a contender for the MS State Championship Small School title after making the 3 hour trip from Cochran and clocking a 10:51 holding off a charge by Oglethorpe MS ace Frey Dawson back in 2nd at 10:56. Frey is due to win a race soon after having several top 5 finishes this season. Rounding out the top 5 were Noah Irwin of ACS in 11:07 and Alex Thomas of (NOHS feeder school) Malcom Bridge at 11:13