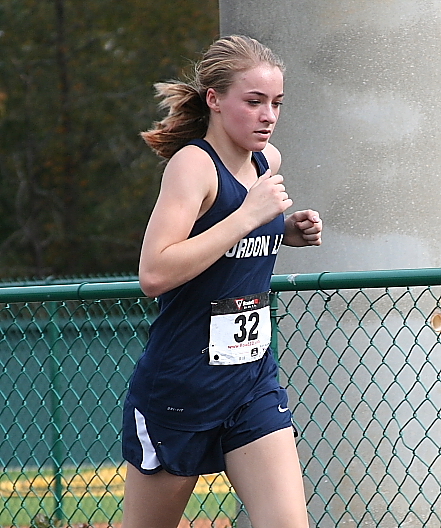 Only a few fans got to witness the closet race of the meet as A Public Girls came down to a 6th runner tiebreaker to decide the team champion. Just 9 days earlier Trion defeated Towns by 12 points at the Area 4 meet. But, with more players in the mix with a few individuals factoring in from other Areas the game was afoot. In near darkness with temps dropping Towns and Trion tied with 60 apiece, but the Towns' 6th runner was far ahead of Trion's deciding the team title. Commerce finished 3rd followed by Hawkinsville.at the team Podium party!  Frosh Sarah Meadows of Gordon Lee won her first of what could be many A Public GHSA individual titles placing 1st in 22:46. Defending champ Ansley Vardeman from Towns placed 2nd in 23:21.