2A- Wesleyan-Westminster  Declared A Tie?  Garrison Repeat as Individual Champ 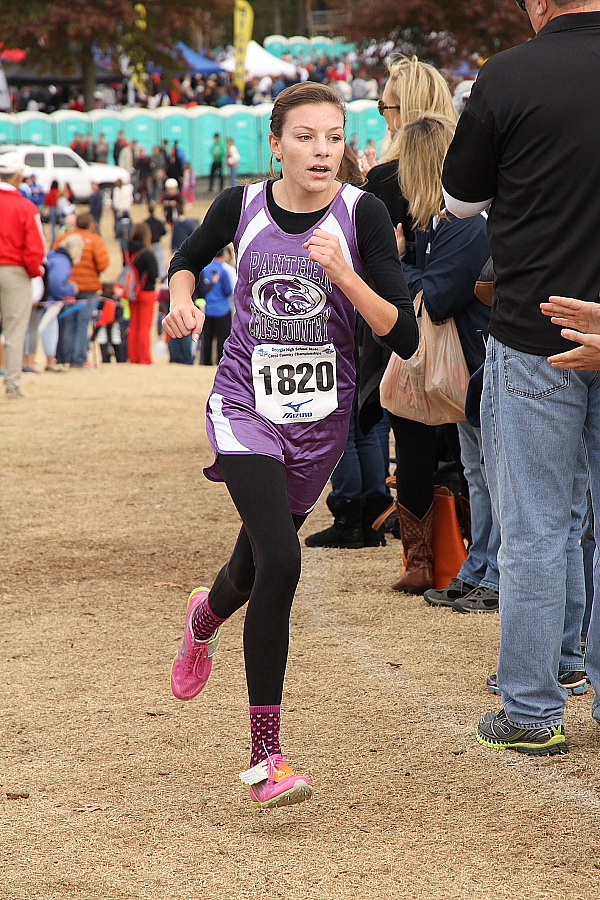 One of the best team races of the day. Looked like anybody's race at multiple points. Emma Garrison blasted the first mile making some spectators wonder who she was and what she was doing, but she was for real posting the 6th fastest time of the day in 19:10. After her it was a 3 team battle. Westminster took the early lead with Lovett close behind. Wesleyan was sitting back just like their boys. At the halfway point Lovett had moved up and looked to be very close to the front. They had Tripodi and Branch in the top 5 and their 3-4 in the top 12 with a 5th very close behind the Westminster pack. Wesleyan had also moved up and closed the gap. The winner was going to be the team with the strongest second half. 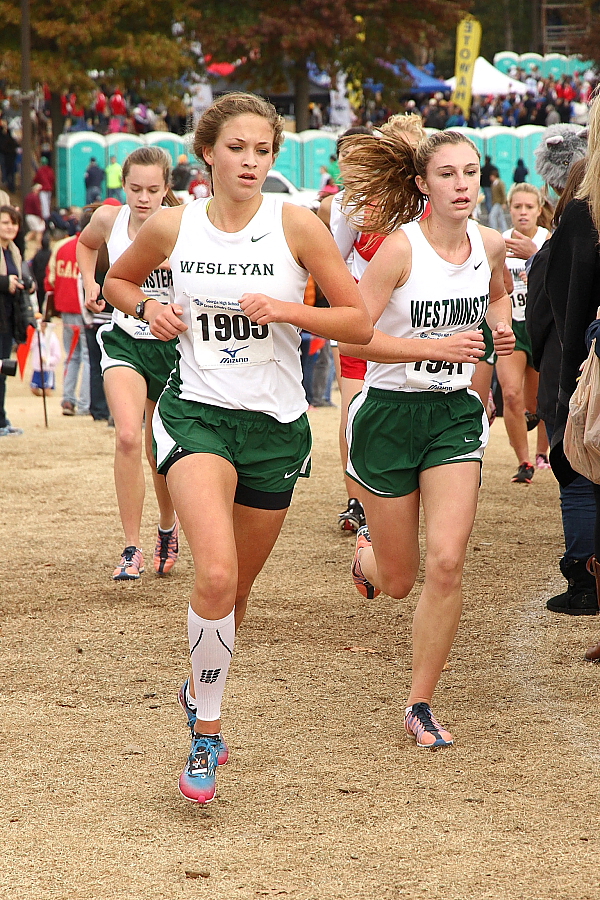 5 Wesleyan/Westminster Gals mix it up in quest for the 2A State Team Title     Image by Jonathan Speights
That turned out to be Wesleyan, but just barely. Westminster still held strong placing all 5 in the top 12. But Wesleyan snuck 2 in front of their #1 and two more in front of their #3 and their 5th runner held on just enough to take the closest team race of the day.  We thought....then Westminster presented a video of the finish, the Lynx photos were looked at by Officials, phone calls were made...Wesleyan had already received their awards, but hold on thar' Bobba Louie, not so fast...the GHSA reversed the positions in question on the Lynx photos tying both teams at 44 points. But instead of following NFHS rules and going to the 6th runner tiebreak (favoring Westminster) a tie and co-Champions were declared. (I have seen both views of the Lynx cameras, and its virtually impossible to tell who was ahead) I believe this is why the GHSA made the decision they did. Just last year, there were no cameras recording the Finish and it was all based on human judgement...
Wesleyan's Caroline Reed was 3rd overall in 19:55 with teamate Jordan Zimmerman 4th at 20:00, Ellie Bradach 8th in 20:32 and Kyle Reed (10th after the reversal) at 20:36  Charlotte Folinus led Westminster placing 5th in 20:17. Other Cats' making the All-State party were Margaret Maxwell in 7th at 20:28 and Gabby Bunnell in 9th at 20:36 (after the reversal). Lovett's Tripodi moved very well the second half of the race taking over second place with about 400 to go and Branch held on strong for 6th as they led the Lions to the 3rd place finish with 61 points with Tripodi's 2nd place effort in 19:37 and Hailey Branch's 6th at 20:20. Bleckley County scored the final podium spot with 145 points led by Ellen Powell's 15th place finish with a nice 3-5 pack that was too much for St. Vincent's to overcome back in 5th.