This was another great two team duel that saw a reverse of last year. Last year BT won region and Pius won state. This year Pius won region and BT won state with a huge team race. Gearing started out fast as expected and dragged Honiotes of Hart with her a few seconds back. Hewell of Banks was in 3rd and then followed the pack that included BT and Pius' front runners. By the halfway point Gearing was almost gone, but Honiotes was hanging in there running well. The team race was virtually even with the BT and Pius runners almost running together at all 5 scoring positions, it was anybody's day. White County was also starting to move up nicely. Gearing and Honiotes held pace for the top two spots in some good times for the cold morning air. 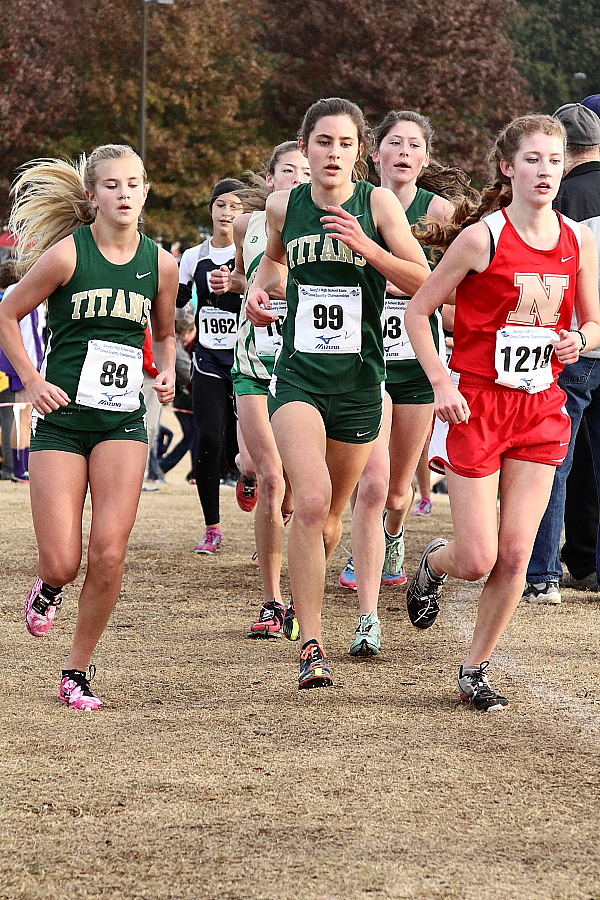 A pack of Lady Titans surrounds Dorie Faber from North Oconee HS     Image by Jonathan Speights
The Lady Titans packed 5 runners in the top 13 positions sealing the win. Gandolfo and Willet were just too strong going 3-5 and Solomon had a big kick to take 8th. Anna Gandolfo led the attack placing 3rd in 20:04 followed by teamates Bailey Willett in 5th at 20:23 and Mary Claire Solomon 8th in 20:52. St.Pius held on for a strong 2nd place with all 5 in the top 20 with 2 girls earning All-State honors Margaret Crawford 4th in 20:15 and Rebecca Entrekin 6th in 20:29. 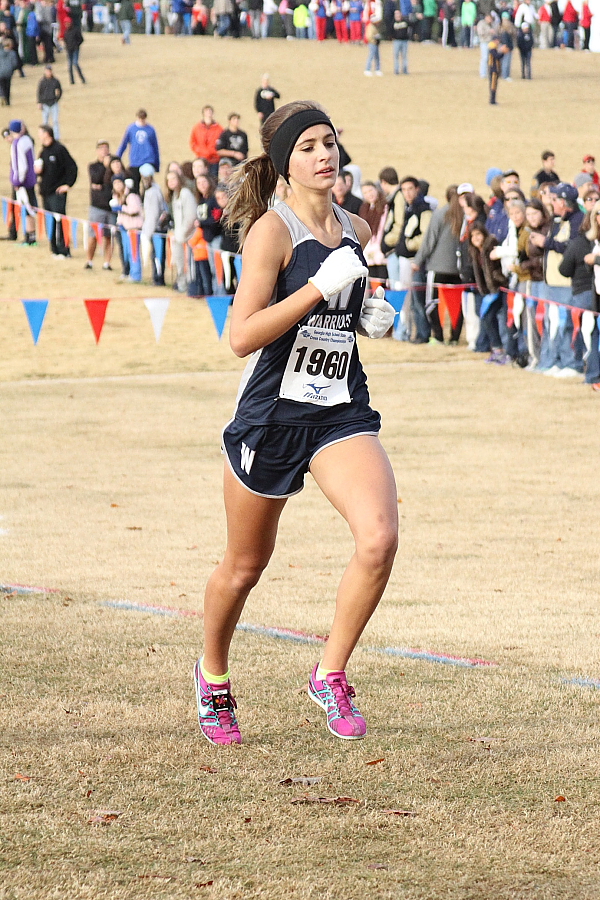 Jenna Gearing won the overall title leading White County to a 3rd place Podium spot      Image by Jonathan Speights
Jenna Gearing was too strong for anyone after the 2 mile winning the AAA girls individual in 19:29 leading White County to a 3rd place Podium spot. Her teamate Kristen Mitchell had a nice race placing 10th in 20:44 also helping the Warriors charge. North Oconee also had a strong showing missing Rachel Sigler but still placing four in the top 30. running to the final Podium spot placing 4th led by Dorie Faber placing 9th in 20:42. Hart County frosh Audrey Honiotes was the individual runnerup in 19:49  Makala Hewell from Banks County took advantage of q'ing as an individual out of 7-A earning All-State honors placing 7th in 20:36.