Parkview's boys outraced Brookwood winning their first region title in several years while the dynamic Shiloh duo of Nahom Soloman and Bryan Kamau went out strong and crossed the finish line in unison (16:24) in the individual race. Brookwood's girls rolled to the team title in preparation for their final battle against Peachtree Ridge next week. Lauren Brennan was the Girls champ in 19:14 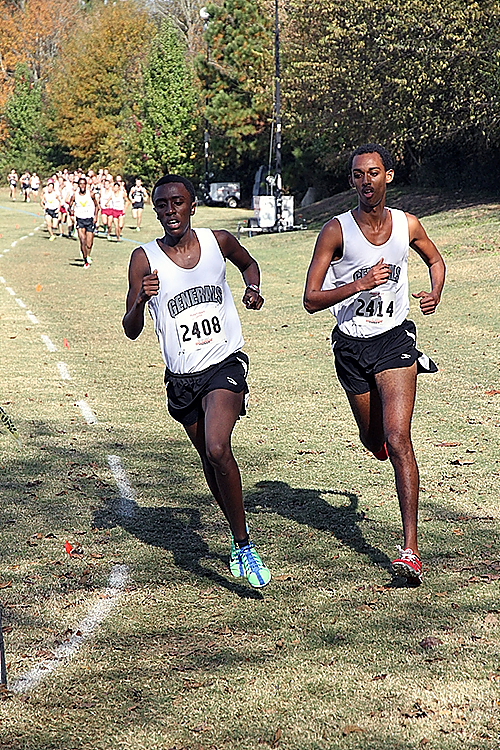 Nahom Solomon and Bryan Kamau of Shiloh separate early enroute to a near tie in the Boys race.   Image by Jonathan Speights
Temps warmed up nearly 20 degrees into the low 60's for the Region 8 races as Solomon and Kamau took it out early from the start, and had a big lead for most of the race, until the end when the gap closed to 5 seconds and both Parkview and Brookwood let them go early. 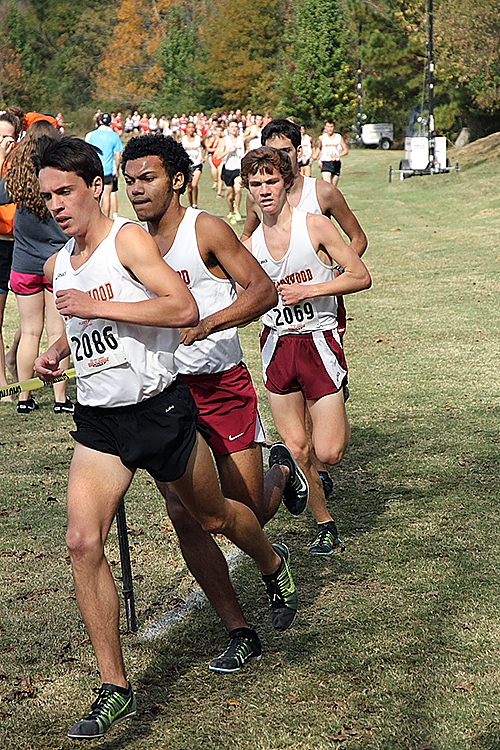 Image by Jonathan Speights
The entire Brookwood top 5 packed it up early and looked to be in control as their squad went through the mile around 5:12 followed closely by the top five runners from Parkview. About a quarter of a mile later, a couple of the Parkview boys went ahead of the Brookwood group as it began to spread out a bit and held that for about another mile.
Parkview ran their own race and put too much distance on the Broncos for them to overcome..Both teams were beginning to get spread out, but Parkview had just enough left to hold off the surging Brookwood runners including Ingalls, Massey, and Yapp of who moved up a lot the final 800 meters but it was Nick Schofer up front and Parkview's 4,5 that made the difference and pulled a shocker, placing 4 runners in the top 9 positions winning by 3 points.
Nahom Solomon claimed the individual crown by the narrowest of margins over teamate Bryan Kamau both crossing the finish line in unison at 16:24 leading the Generals to a 3rd place and a state berth. Nick Shofer of Parkview closed the gap considerably on them placing 3rd in 16:30, Josh Ingalls of Brookwood finished 4th in 16:33, William Freeman of Parkview was 5th in 16:36 and Miles Yapp of the Broncos was 6th in 16:40. Grayson placed 4th earning a trip to Carrollton as well. The big question is...was Brookwood holding back saving it for State? We'll all know in 6 days...
Girls 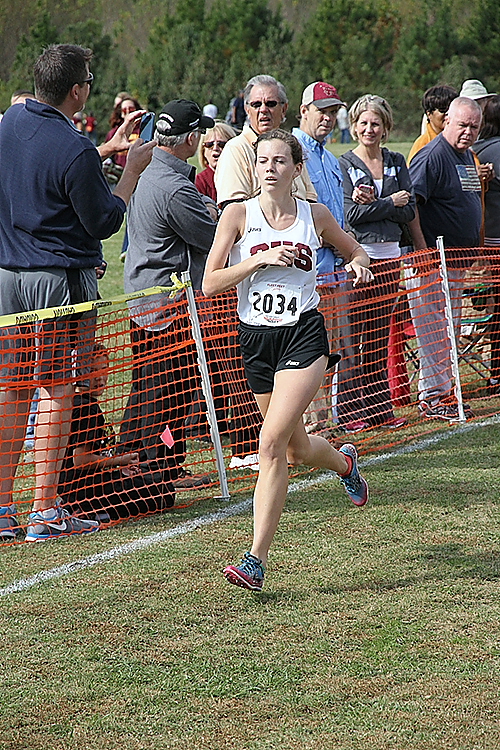 Lauren Brennan of Brookwood heads towards the finish line            Image by Jonathan Speights
Brookwood, like their counterpart Peachtree Ridge in region 7 totally controlled the race in a rehearsal for 'Round 4' at the state course next Saturday. The race went out rather conservatively as the lead pack hit the mile marker around 6:15-6:20ish. The Bronco duo of Lauren Brennan and Laurel Sumner, Grayson's Yanely Gomez and Parkview's Julie Wang began to separate from the pack a bit later. Brennan was too strong on this day and pulled away in mile 3 for the individual title in 19:14 with Sumner placing 2nd overall in 19:28. Gomez was 10 meters back crossing the mat in 19:30 and Wang placed 4th in 19:52 leading the Panthers to a runnerup team finish. It was a nice race for 2nd thru 4th teamwise as Parkview topped Grayson by just 5 points and Dacula claimed the final team Q' spot 14 points behind the Rams.