On a brisk cool morning with temps in the mid to upper 40s at race time, Region 7 determined their champs and qualifiers for state. Kevin Mills of Peachtree Ridge won the overall title in 15:42 leading his squad to 2nd place. Mill Creek's boys came back strong from Coach Wood taking the team title placing 3 runners in the top 5 positions. The Ridge Girls easily won the girls title placing 5 in the top 11 as Addy Lippitt took the overall win in 18:37. 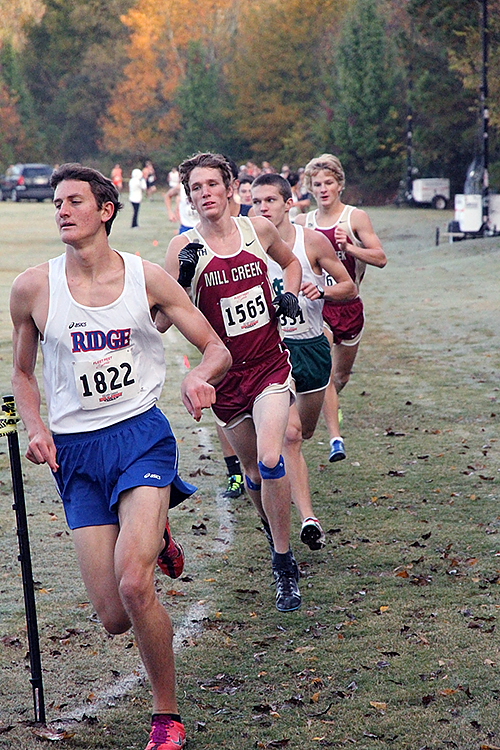 Kevin Mills, Tyler Woodrome and Daniel Ellis round a corner in the Boys race     Image by Jonathan Speights
Kevin Mills led pretty much from start to finish winning the overall title at 15:42. Mill Creek's Tyler Woodrome was 2nd early, then faded a little and teamate Eric Westog took over 2nd for the majority of the race. The team race seemed to be in Peachtree Ridge's hands, but a couple of Collins Hill runners passed their #3 and 4 towards the end, Woodrome outkicked Daniels Ellis, and MC senior Josh Arceneaux passed Robert Bevins of Mountain View in the last 400 meters, all which formulated to lead to a 2 point victory for Mill Creek over Peachtree Ridge.
Mill Creek placed 3 harriers in the top 5 including seniors Eric Westog placing 2nd behind Mills in 15:56, Tyler Woodrome in 3rd at 16:07 and soph Sam Costa 5th in 16:10. Collins Hill placed 3 runners in the top 9 finishing 3rd in the team standings led by senior Daniel Ellis in 4th at 16:08. Also congratulations to Mountain View, who qualified for State and for the first time in their school history led by Donald Shelton in 15th.
Girls 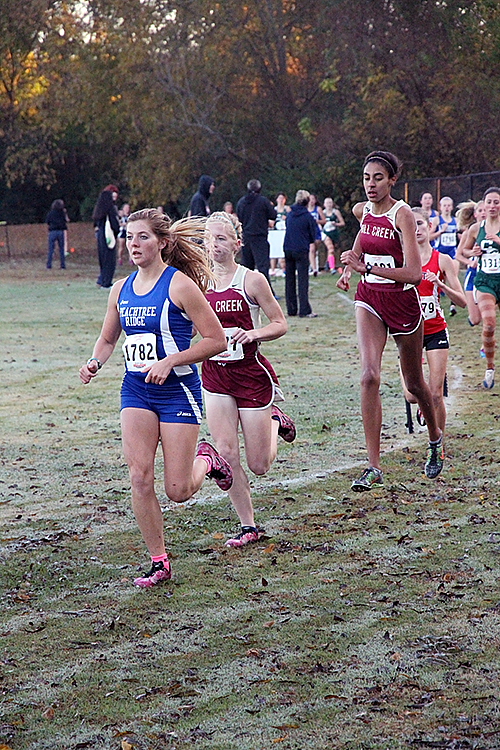 Addy Lippitt (l) of Peachtree Ridge and Lauren Hovis (c) of Mill Creek had a classic duel in the Girls race   Image by Jonathan Speights
The region 7 girls field went out aggressively with most of top 10 through the mile mark in well under 6:00. It quickly turned into a classic duel between Ridge's Addy Lippitt and Mill Creek's Lauren Hovis as they separated from the field Hovis held a slim lead early, with Lippit pulling up next to her later, and they pretty much were together until 1K to go. Hovis made a move and looked to be pulling away, but with around 400 to go, Lippitt began gaining on her and in the last 150m unleashed a massive kick to win going away clocking a 18:37 to Hovis' 18:44. Finishing in the top 6 were Mill Creek's Hannah Lopez in 19:14, Courtney Czerniak in 19:18, Caroline Williams of the Ridge in 19:20 and Rebecca Winslow of Mountain View 19:22.
Peachtree Ridge easily won the girls title placing 5 in the top 11 behind Lippitt and Williams top efforts. Collins Hill was 2nd scoring 66 points led by Mariah Maring's 9th in 19:37 and Lenore Luce's 10th in 19:44. Mill Creek came in 3rd with 88 paced by Hovis and Lopez and North Gwinnett punched their ticket as well to state next week.