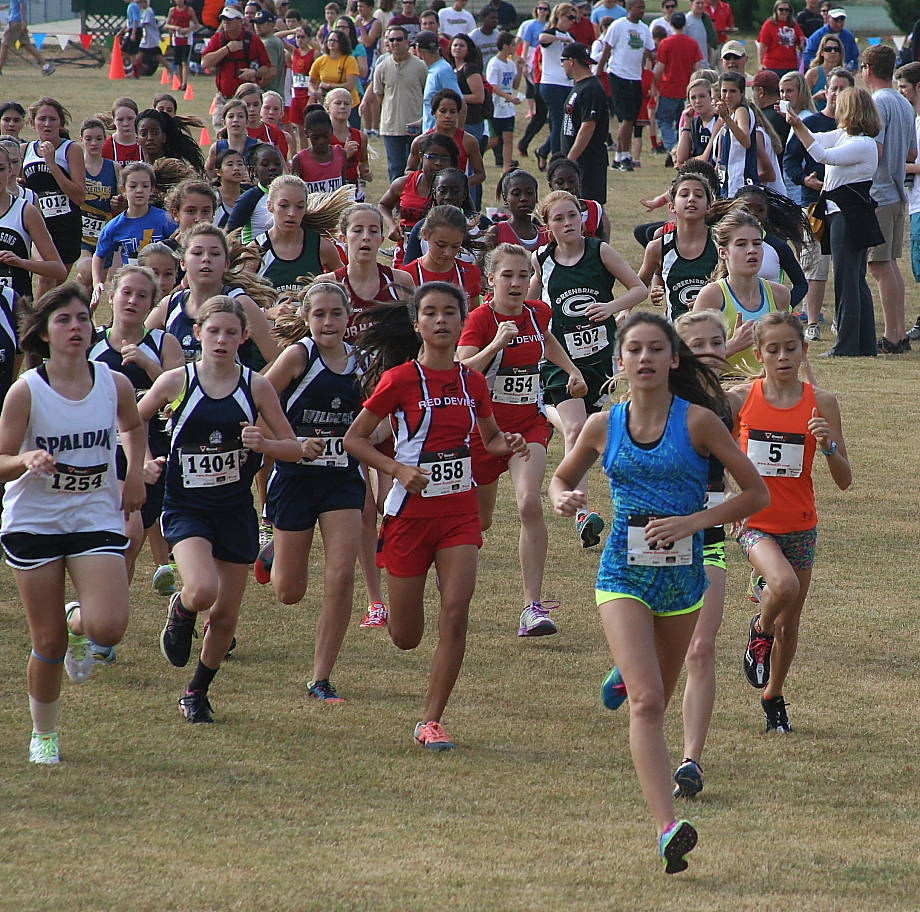 Another enjoyable event drawing nearly 1300 runners was again successful on a revamped, more fan friendly course (with 4 large display clocks) which the fans and runners had to enjoy... Marist signed up just in time to come down and whoop all the Large School teams. George Finch was cool as Fonzie raceday, executing his plan, winning the MS Boys Large School Individual title. Sydney Runyan of the Etowah Youth TC  turned it on seizing the (LS) Girls overall title posting a 12:28. 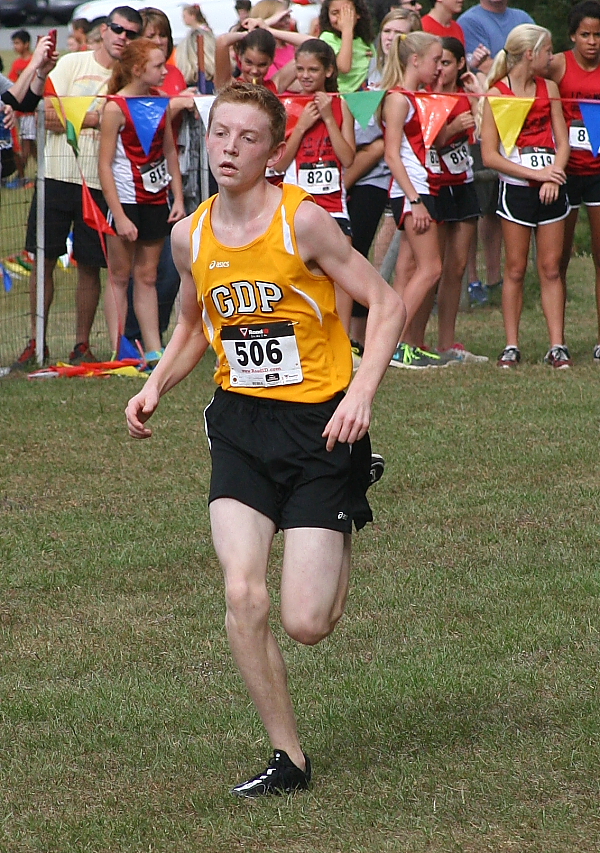 George Finch was cool as Fonzie raceday, executing his plan, winning the MS Boys Large School Individual title. Finch, from Carver MS in Monroe, has been mostly coached by his dad. At the 800m mark (first loop thru the finish line) 2 runners tried in vain to stick with George. But, wiry Finch was too strong  separating on  mile 2 powering away for the win in 11:21. A pair of River Ridge Youth Club runners ran in tandem taking the next two places including Jacob Brenneman in 11:34 and Zac Cantrell in 11:46. 7th grader Andrew Scott of the Lost Mtn. Hoyas(whose dad happens to be the Head Coach at Harrison) placed 4th clocking a 11:50  Also going sub 12: were in order: Leif Anderson from Marist in 5th at 11:55, fellow 7th grader Derrick Pearson of Woodland Euharlee placed 6th at 11:58, and John Nicklas Rowland of Bonaire MS hit 11:59
The Large School team title was pilfered by Marist from Atlanta. Coach Heintze from the HS informed us their MS program is extremely low key, so he should have a talented frosh class to work with next Fall. Woodland Euharlee as usual made the most of their long trip placing 2nd 12 points behind Marist. Carrollton was a mild surprise placing 3rd.
Large School Girls 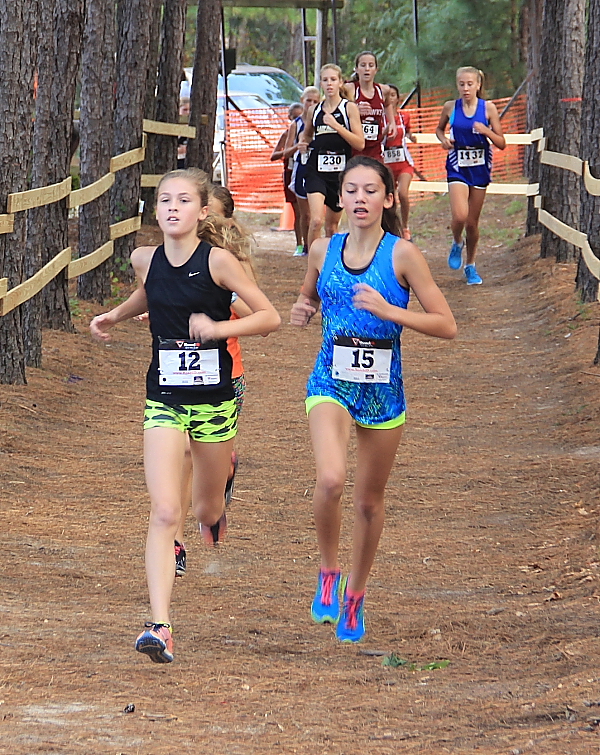 Sydney Runyan (l) runs in sride with Alex Whiten under the Pines enroute to her Title   Image Courtesy of Tim Phelps
Individuals running 'unattached' took 6 of the top 7 places in the Girls race. It was at hinted at on the Discussion page, about a runner from USATF GA meets named Sydney Runyan. Sydney is a 6th grader attending ET Booth MS and runs for the Etowah Youth TC and had 1 performance in the database (Warpath 12:20) It mattered not, as she turned it on seizing the (LS) Girls overall title posting a 12:28. Sydney has been state & regional champion in XC for USATF Junior Olympic Meets as well as an All American at the National Championship Meet. Nyah Hernandez is a 6th grader from Canton who took 2nd trying to charge down Runyan on the slightly uphill homestretch in 12:35. Kira Stanley representing Durham MS placed 3rd close behind in 12:38. Rounding out the top 5 were 7th grader Alex Whiten in 12:40 and Josie Wirtz in 12:54. 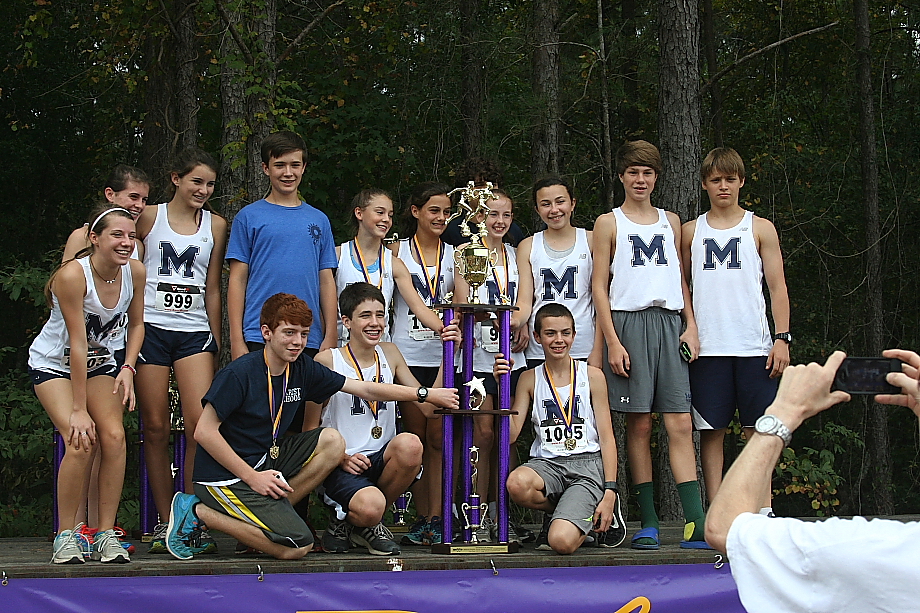