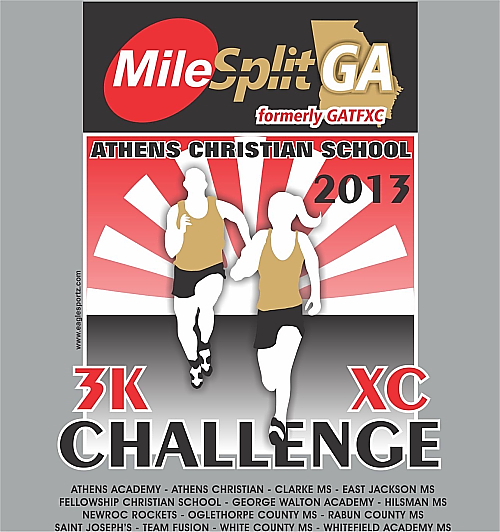 Ga.MileSplit MS 3K Challenge Preview
The Ga.MileSplit MS Challenge was founded by Fast Feet Timing to provide MS programs and Individuals (including homeschoolers) a place to compete in friendly, but good competition.14 of the top Middle School and club teams in the area will gather Wednesday at Athens Christian School and compete at the 2nd Annual Ga.MileSplit MS 3K Challenge. In mid-May the venue had to be moved to ACS later in the season due to availability at NOHS and timing obligations to other events. Next season, the event will probably be back in Bogart.. ACS had a hill loop re-added to the course (that had to be removed for NEGA as it was too muddy with recent downpours) making it more challenging and a wheeled 3K.
Girls
Area teams will have a chance to buzz around the ACS course for bragging rights in a tuneup for the MS State Meet down in Cochran 11 days from now. The Athens Academy and ACS girls should have a nice battle in a rare local matchup as in recent history they may compete maybe twice a season or down in Cochran. The Spartans won an earlier meet at their home course so ACS could be looking for some payback. The top runners are this week's MS Girls ROW- Anna Marion Block,  honorable mention Tanner Guest of ACS and Madeline Bowser of Rabun County MS.
Boys
On the Boys side, Athens Christian has ran well this season winning a few invitationals and placing 2nd in a couple more. Clarke MS has a very large program and last Thursday at Athens Academy was the top boys squad by 30 points over George Walton who will also be competing this Wednesday. The NewRoc Rockets (Conyers) club could pose a threat to win the team title. Some of the top MS individuals will be gunning it for the overall title.  Former ACS runner Jonathan Jenkins of NewRoc turned in 10:49 at Crows Lake 2 Mile..a trio of area runners should give chase that did battle at 'Acad' this past week including Clarke MS stud Gabe Mantione-Holmes, Jesse Reid of George Walton and Dawson Frey of Oglethorpe MS. ACS's Orlando Stephenson and Will Gilbert could be tough on their home turf.
Tweets by GAMilesplit