It was a hot day at Allatoona Park (Cobb County Corps Properties) that turned an always close meet into a war of attrition. With temps in the mid-80s, limited shade, and some tall grass in areas, it wouldn’t appear to be a chance for many PRs, but we saw some very tough competition and some relatively fast times. In the end, Marietta proved to be the dominate team on both the boys and girls sides. 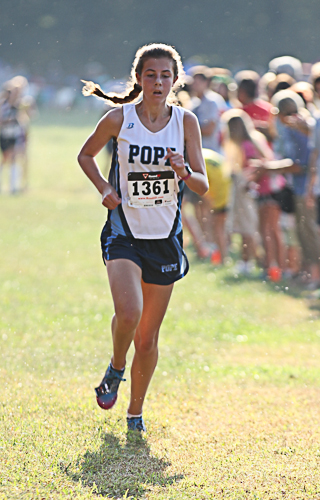 A huge group of runners came through the mile at a relatively pedestrian 6:05, probably due to the. Avery Bussjager of Walton and Ashley Kehoe of Pope led with the entire top 5 of Harrison and Marietta closely bunched. During the 2nd mile Bussjager and Kehoe pulled ahead and strung out the pack. By 2 miles, the due were well clear of the field and shoulder to shoulder. Behind them, the Marietta girls had positioned 3 in the top 10 and were moving up nicely. The Walton girls and Harrison girls were fighting it to chase the leaders through the hot, dry fields. Bussjager attempted numerous times to break away from Kehoe, but the younger runner countered each time and with about 500 meters to go made her push that developed into the gap she needed to cruise to victory. Bussjager was a clear 2nd and then came the Marietta onslaught as Kayla Dawson, Rebecca Dow, and Mary Jeanne Assinzo finished 3rd, 4th, and 5th respectively. Then came a slew of Walton and Harrison runners racing down the homestretch. Harrison had 4 finish in the top 15, Walton was the first with 5 across the line, but the Lady Blue Devil’s 4th and 5th stayed close enough to give them the 5 point win over the Lady Raiders who cleared Lady Hoyas by a scant 8 point. This was Marietta’s first ever girls county championship. In the small-school race, Mount Paran Christian soundly won the title beating many of the big schools along the way. 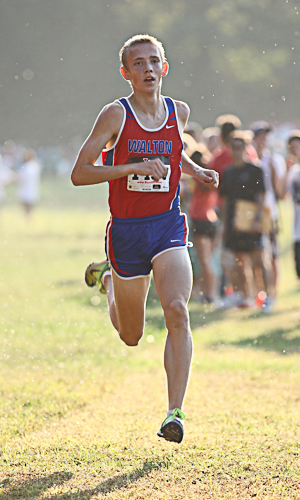 Unlike the girls, the boys went out as hot as the weather. Alex Dunlap of Kennesaw Mountain took the first mile out hard (just over 4:50) with Logan Poteet of Kell close behind and Kenan Farmer of Walton a stride or two back. Then came a pack of white kits that included the Harrison Hoyas and Marietta Blue Devil’s entire scoring teams. At two miles, Poteet was making his move. He started to gap Dunlap with Farmer a few strides further back. Farmer made a move to stay in the race and passed Dunlap on his way to getting onto the shoulder of Poteet on the long straightaway leading away from the spectators. The pack had strung out with the striped shorts of Marietta clearly having the advantage over Harrison. At 600 meters to go, Poteet and Farmer were battling it out with Farmer getting the edge. Kenan would finish strong and break the long standing county meet record (15:44.8 by Andy Burns of Pope in 1991) with his 15:36.4 victory. Poteet showed his a real threat for the 5A title with a strong 15:49 and Dunlap held on for third. The team race was next as Marietta followed their girls plan and put their top 3 all in the top 7. Harrison held on well with 4 in the top 13, but Marietta’s depth proved too much as they had 6 in by 16th place, besting the Hoyas by 15 points. Mount Paran Christian claimed the small school prize narrowly beating the North Cobb Christian boys.