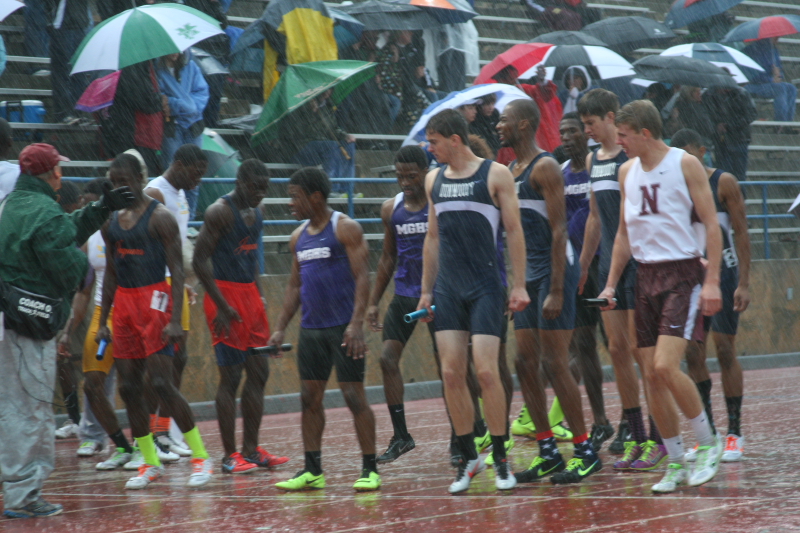 It doesn't get any worse than this as the 5A Boys 4x400 contestants tried in vain to stay warm in monsoon-like conditions minus 30 degrees! 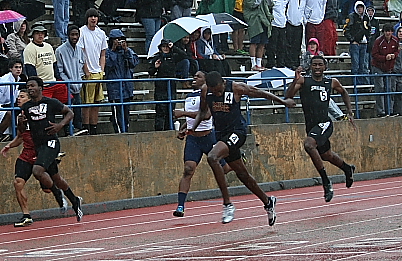 Mill Creek's Cheeks closes the door on 6A winning the 200m     Image by Bruce Taylor ga.milesplit


Mill Creek has the facilities, a huge student body and excellent coaching, give them a few athletes and a state title was bound to happen, as it did in Cross Country last Fall.  But the fact they won by 16 points is a crowning achievement (even without Woodrome Q' for the 800m finals) Michael Cheeks was the spark clinching the team title winning the 200m in 22.01 in a -1.6w and placed 3rd in the 200m  The Hawks began the day w/ a 4th place finish in the 4x100m and ended it effectively by winning the 4x400m in 3:24.22  Hillgrove stumbled a bit managing 2nd in the team scoring with 43 points, Brookwood hung on for 3rd and Walton's distance prowess pushed them to 4th.

Westlake struck first taking state title in the 4x100m relay clocking a 42.18 in soon to be worsening conditions. Shiloh's Grant Swinton triumphed in the 400m at 48.30 It took a true warrior to prevail in conditions like today and Corvante Benson of Marietta is in that club easily winning the 100m in 11.03 besting Hillgrove's Demetrius Duggans at 11.16  Campbell's Alan Frye took home the 'bpa' in the 110h gliding to a 14.46 win. In the 800m race of the day Walton took home another individual title as Brian Sullivan held off a late charge by Andres Littig of N.Gwinnett with the fastest time of the day in 1:54.52  As mentioned above Cheeks closed the door for Mill Creek taking Gold in the 200m holding off Justin Leggett of Camden and Duggans. Frye pulled off a rare hurdles double winning the 300h also in 38.74 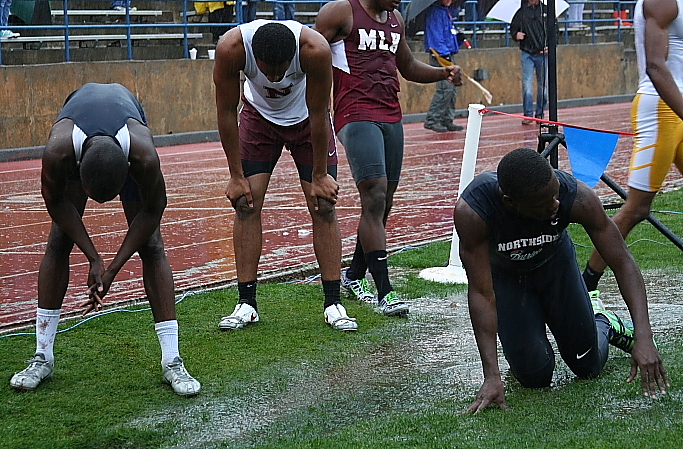 5A athletes in the quagmire of Jefferson's beautiful turf after their 4x400m leg    Image by Bruce Taylor ga,milesplit

This class as previewed became a low scoring affair. McIntosh was severely disadvantaged by Hort and Speir only racing 1 distance event each, though scoring 18 points. Taylor Huntley responded by running the race of his life for McIntosh winning the 800m clocking a 1:55.97 putting them ahead to stay w/ 40 points. Cedar Shoals fell a few strides short of tying things up in the 4x400m placing 3rd behind Miller Grove.  Greenbrier finished 3rd with 35 points followed by NS Columbus with 29.

Creekside rolled up 20 quick points early led by their BPA winning 4x100m squad (3 consecutive years now at the Ga Olympics) anchored by Evan Berry who 2 events later scooted to the  100m win in 10.95. (though was a scratch in the 200m) Greenbrier had a solid start placing 2nd in the 4x100m as well as Cedar Shoals (5th)  The Wolfpack were on a roll with Warren Coombs placing 2nd in the 400m behind winner Darius Statham from Mays (48.91), then Jeremy Harden was 2nd behind Berry in the 100m (24 points for Greenbrier)

Myles Hunter of Heritage came out on top in the 110h at 14.71 follwed by Kevondre Hunt of NS Warner Robins and then Huntley did his thing in the 800m for McIntosh which was huge as he came back from at least a 10m gap with 150 left overtaking Richmond Hill's Corey Jones AT the finish line.  Darius Watkins from Grovetown came back strong in the 200m with a winning effort of 22.24 after placing 3rd in the 100m  NS Warner Robins' Hunt gained some payback in the 300h battling steady sideways rain and a headwind down the stretch winning in 38.19  the 4x400m relay was one rain drenched event with bodies sliding off the track after passes coming down to a 'Finish LYnx' finish as Dunwoody just nipped Miller Grove by .04 (3:28.83) 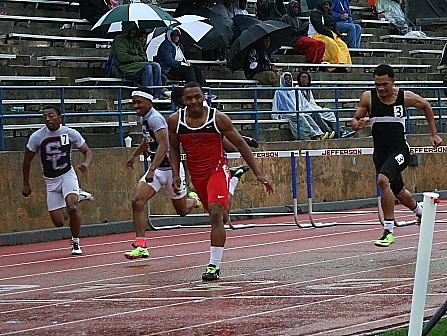 Taurean Ferguson of Jonesboro gets some payback in the 4A  300h   Image by ga.milesplit

Marist held a commanding lead going into Saturday and never looked back adding yet another 21 to claim the 4A state title.  Nolan Daniels picked up a 4th place finish in the 400m, David Gilstrap placed 4th in the 110h, Ricky Nelson (w/ a raucous Marist contingent supporting him) scored 5 points in the hurdles, and freshman Frank Pittman enjoyed success placing 3rd in the 800m.

In a tight battle for Podium spots the Grangers from Lagrange were ecstatic placing 2nd making the most of their scoring ops. Demoton Boyd was the catalyst winning the 200m in 21.76 while placing 3rd in the 100m. Andrew Coggins excelled in his preferred event (the 800m) after a strong runnerup finish Thursday in the 1600m winning comfortably in 1:57.57   Did I mention Eagle's Landing in the 4A preview? No, but did they not maximize their chances as Cymeon Burden placed 3rd in the 400m at 49.98, Chavis Burns taking 4th in the 800m and Warren Wright scoring 2 points in the 110h. Carrollton placed 4th with 32 points and Sandy Creek 5th w/ 30.5 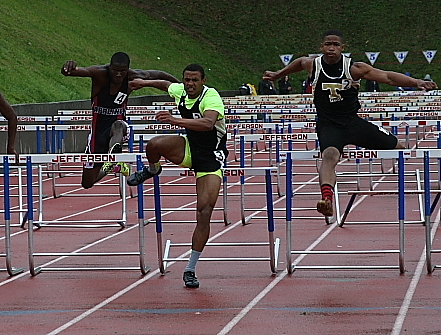 St. Pius X had an insurmountable lead going into Finals, but scored a few more putting a cherry on the icing for the 3A state team title. Joe Beach added 7 points in the hurdles, Tirrell coralled a 4th in the 800m and their 4x400m squad placed 5th for a final tally of 85 points. Chapel Hill had an excellent day in the flood claiming 2nd place in the team standings behind the efforts of speedster Jamal McDaniel's win in the 200m at 22.32 and runnerup finish in the 100m (11.03) Paul McLeod was superb taking the 800m race in 1:58.04 holding off Oconee's Jon Issac Smith 1:58.92 (2nd) Cedar Grove managed to take 3rd overall due to their awesome 4x400m squad's Gold and Darius Freeman's sprint efforts including a 2nd in the 200m and 6th in the 400m. Oconee County placed 4th in the team scoring giving Coach Josh Mize a present as he's stepping down as head coach after this season. Wake Roberds was key placing 2nd in the 400m at 49.39, 3rd in the 300h and driving OC's 4x400m squad to a 3rd place finish.

Individually, I warned folks about this young man from Sonoraville, who late in the season flew into the radar of ga.milesplit during Sectionals at Lakewood. And he did not disapoint as Andrew Slanton doubled in 'Terrance Trammell' fashion, in the 100m clocking a 11.02 then 40 minutes later slayed the field in the 110h at 14.48  Kevin Johnson of Appling will take some Gold back to Baxley as he captured the 300h crown in 38.81  Appling also won the 4x100m race in 42.34 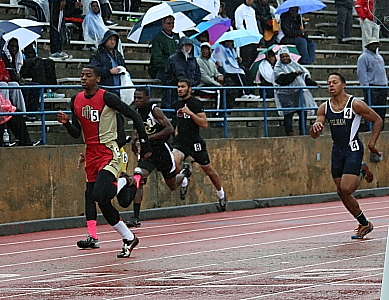 Westminster completed their quest for a team title in fine fashion, though not without a challenge from the boyz of Brooks County (10 miles from the Fla state line) The Cats were in the hunt before the 800m race, then swept the top 2 places as Jag Ganjemi scored the Gold Medal in 1:58.48 w/ teammate Austin Dhillion's late charge paying off for 2nd in 2:00.73  Adam Sanders 5th place effort in the 300h sealed it for Westminster. Cameron Seward took home a bronze medal as well in the 110h for Westminster. The Cats then extended their margin of victory in the 4x400m placing 3rd as Brooks was done w/ scoring ops. The Trojans from way down south did wreak havoc in the sprints, hurdles and a 4x100m relay Gold led by Mativus Brooks and Tyrus Darrisaw (42.09). GAC came out 3rd in the team standings and Calhoun a surprising 4th followed by Lamar County.

Individually, Darius Slayton from Greater ATL Christian (GAC) doubled in the short sprints with times of 11.00/22.72 Teammate Micah Abernathy sliced his way to the 400m crown in 50.14 and GAC's 4x400m squad placed 2nd ending a nice Finals run for them. My homeboy Jared Miller from Greene County placed 2nd in the 200m...Kendrick Pressley scored 16 points for Oglethorpe County winning the 110h in 15.02, placing 3rd in the 300h. Lamar Austin of Lamar County easily won the 300h in 38.60   Wesleyan closed out the meet winning the 4x400m relay in 3:27.50 Henry Dwyer of Athens Academy got some huge redemption from 2012', as he owned the 800/1600m races   Image by Bruce Taylor

Athens Christian defended their 2012 title in style scoring 50 more points Saturday without winning a single event displaying their program's strength. Justin Brooks had the highest finish for the Golden Eagles placing 2nd in the 200m w/ twin bro Josiah in tow for 3rd. Justin also raced to 2nd in the 400m as Josiah placed 4th. Tae Carruth added a 4th place effort in the 110h w/ teammate Christos Martinez doing the same in the 300h. ACS added points in both relays placing 4th in the 4x100 and 3rd in the 4x400m.

There was a great battle for team places after ACS w/ Landmark Christian ending up 2nd besting those pesky Tigers of Darlington by 2 points thanks to their very narrow 4x400m relay win in 3:26.73 to Darlington's 3:27.44  Our Lady of Mercy secured a 4th place cup led by 1A Pvt High Point Man Christian Coleman whoe scored 28 points for the Bobcats. ELCA placed 5th with 48 points. 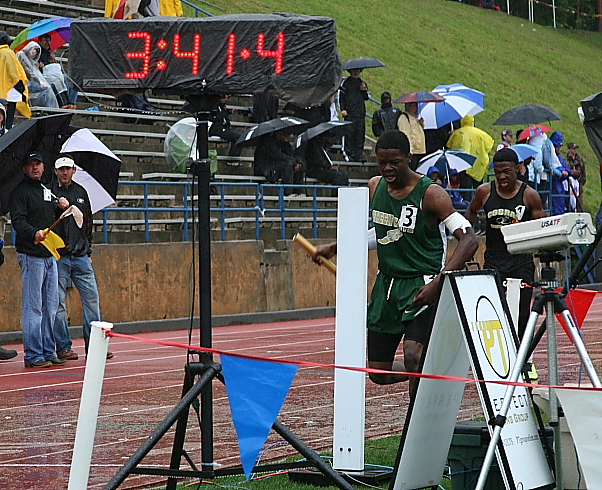 An unidentified Terrell County athlete, steps off the track just before crossing the finish line costing the Green Wave a state title  Image by ga.milesplit

Strange brew for this class.... Ga.MileSplit received just a few results from the power squads like Commerce, GMAC, Twiggs, Terrell County, Gordon Lee from Area meets and Telfair County's coach adding to his team page. Commerce had a 5.5 point lead over Terrell County (Dawson) going into the 4x400m Final w/ Terrell having a great op to win the title outright with a 3rd place or higher finish as Commerce had no dog in the fight...Terrell led after the final pass until about 150m, with Georgia Military Prep overtaking them. As GMAC sped across the finish line, the anchor from the Green Wave (Terrell) looked strong then suddenly walked off the track approximately 1-2 meters from a very well marked finish line shocking anyone who was paying attention (especially Perfect Timing and myself (Fast Feet Timing)  Twiggs sped by placing 2nd while the Terrell runner used the old Finish line marker to steady himself looking unaware of the situation. 2 more meters and Terrell County would have won more tha likely, their 1st state Track title...

Commerce's efforts were led by Dekerrio and Terrick Ramsey. In another strange twist, the 300h had to be re-ran due to interference from another hurdler impeding lane 7. In the do-over, only 5 athletes finished and Claxton's Evan Credeur took adavantage winning the race (must have been better conditioned) Raytez Jenkins of Central Talbotton swept the 200/400m races, Bryton Wenzel of Baconton Charter redeemed himself after a close 1600m loss winning the 800m going away in 2:04.05 Dezmond Moran of Jenkins County won the 110h in 15.85  Jerkerious Scott of Terrell Co. took the 100m crown in negative wind at 11.20   Hancock Central blazed to the 4x100m title in 42.64