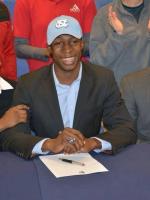 Round 1: Who's The Top Boys Hurdler From The Past Decad...
Let the games begin to determine who the top boys hurdler of the past decade is....

1/17 Weekend National Rundown...
Keep your finger on the pulse of HS T&F with live updates from the weekend's top races....

Vote for US High School Track & Field Boys Athlete of t...
MileSplit is leaving it up to you to decide who was the best high school track & field boys athlete for the 2014 season in the entire United States!  Select between 8 high school stars among the best...

Competing at Worlds? Nothing like it for two-time US te...
Despite being a veteran to the IAAF World Championships meet experience as a World Youth bronze medalist last summer in Ukraine, the feeling is just the same for US hurdler Kenny Selmon. Nothing like ...

Kenny Selmon consistently quick between the hurdles...
Kim Batten considers one of her protégés, recent New Balance National Outdoor 400m IH champion Kenny Selmon of Pace Academy, Ga., among a very small group that have potential to match the excellence...