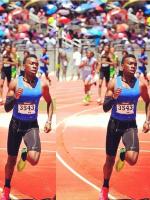 Kailon Brealond Signs his NLI with Pittsburgh...
Kailond Brealond from North Cobb HS signed his NLI to compete for Pittsburgh Panthers. Brealond specialized in the 800 meter run placing 3rd at Sectionals in 1:56.59 and has a pr of 49.36 in the 400m ...

Boys Preview: Mobile Challenge of Champions...
Here is the boys preview for the Mobile Challenge of Champions.  I think we can all agree this is one stacked field....
6A Boys Team Power Rankings thru 3-25...
Its beginning to get real in 6A Boys as WEstlake and Shiloh are all tied up with 76 points, as Rockdale County is in 3rd position  with powerful Mill Creek lurking a point back. North Cobb HS and Mar...

Many of Georgia's best in track & field are found in Co...
Arguably the best county in the state of Georgia for high school track & field held the first portion of their county championship meet this past weekend. Cobb County, which includes Northwest suburbs...
Georgia HS Tracksters Perform Well at New Balance Indoo...
With the GA HS Outdoor season in full swing (almost half way thru the regular season) about 20 athletes made the long trek to The Armory in New York  to compete against the best Indoor athletes in th...
Boys 6A Team Power Rankings 3/10...
These are the 1st Team Power Rankings of the 2014 Outdoor Season. This article includes 6A Boys with Shiloh narrowly ahead of Mill Creek.  These rankings were calculated by scoring the rankings as a ...