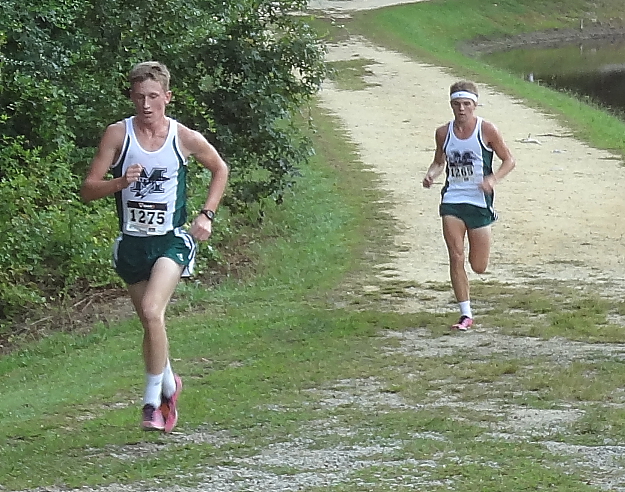 Boys- 35 runners turned in sub 17 performances in the Varsity (1) race and McIntosh came out slinging as Brad Hort and new transfer Sidney Speir (from Minnesota) swept the top 2 overall positions with 4A 2011 State Champ Hort winning in 15:30.91 and Speir close behind in 15:35.12. Milton's Nathan Riech 3rd in 15:46 and last season's top freshman Drew Sands of Woodward placing 4th in 15:49.45..McIntosh, Milton and Woodward also were the top 3 teams of the day as McIntosh claimed the team title with 53 points and team avg. time of 16:07, Milton had a strong 16:21 team time and Woodward 16:27. Wheeler, Hillgrove, North Gwinnett and Union Grove all had strong performances.

Having watched these guys run a bit in the Athens Summer Series it comes as no surprise that North Oconee is going to be a team to watch the next 4 years as they have a 3 headed monster that could possibly challenge St.Pius X down the line for a 3A Boys title. Frosh Harper Sigler had an outstanding HS debut winning the Varsity (2) race in 16:39, followed by teamates Soph. Cole Thornton in 16:48 and frosh Thomas Moore in 16:50...the Titans also took the team race scoring 34 points and avg team time of 17:09.

The Boys JV race had some excellent Individual efforts led by another freshman Davis Stockwell of Lakeside-DeKalb HS clocking a 17:03,20 nipping Woodward Academy's Collin Silliman by .69  Milton had 4 runners go sub 17:30 led by Jammer Howell in 17:08

Girls- Annie Kelly of Milton clocked the first girls sub 18 time of the season as she won the Varsity 1) division in 17:55. Kathryn Foreman of Landmark Christian had an outstanding HS debut placing 2nd in 18:09. Allie Buchalski of John's Creek placed third in 18:17 and Landmark's Lindy Long was 4th in 18:25. Milton's Girls dominated the team race placing 1st with 64 points and a 19:32 team avg. Landmark proved they will be a force to be dealt with in 1A Private placing 2nd with a team avg. time of 19:45. Katie Strawinski of Mount Pisgah won the Varsity (2) North Oconee came out on top in the team race and that was without Olivia Pigg who at an undetermined time be transferring to Florida. Rachel Sigler (Harper's twin sister) led the way in her HS debut clocking a 21:02. In the JV race- Sarah Foreman (Kathryn's younger sis from Landmark Christian won going away in 19:59!

Boys-  Since the inception of this meet in 2005, it has grown larger and the races have become more competitive. This past Saturday may have set a new standard as 3 of the top teams in the State fought it out including North Hall, Lakeside-Evans and Flowery Branch in the Championship race. 13 runners cracked sub 17, including Overall champion Chase Fowers of Lakeside-Evans as he clocked a smokin' 16:05 on a moderately challenging layout. Teamate Christian Bowles was runnerup in 16:13 and North Hall's Witt Nix placed 3rd in 16:20. The Trojans from  Gainesville also packed in 4 runners in the top 10 spots including Nix, Tucker LoCicero and Bryce Schuebert in a 3.6 second Split separating them, to take the team title by 8 points over 5A Lakeside-Evans who is ranked #2 in their class. Flowery Branch ran well as a team placing 3rd 11 points back and were led by Taylor Fiorello who placed 6th clocking a 16:24 with teamate Nicholas Ashmead just behind in 16:28. Justin Weegar of Evans HS ran away with the Varsity division title in a swift 16:35..The Falcons of Flowery Branch dominated the team race winning by 39 points and an 18:22 team avg. Hephzipah placed 2nd besting Clarke Central in 3rd by 11 points. 8th grader Allen Clark represented Lakeside-Evans in the JV 3K winning in 9:50

Girls-  Tayler Tuttle of Providence Christian took a surprising win over many strong runners including a pack from 6A Mill Creek and top ranked 5A Lakeside-Evans as she took the Overall Best in 19:06. Sarah Bowles was hot on her heels taking runnerup honors in 19:08  It was a close battle for the team championship but powerful Mill Creek came out on top scoring 52 points with a team average time of 20:48 placing 3 runners in the top 8 led by  Lauren Hovis' 3rd place finish in 19:54, Ashlee Varnson placing 6th and Hannah Lopez in 8th. Lakeside-Evans was 9 points back with a team avg. of 20:44 led by Bowles. Flowery Branch was 3rd overall with 82 points led by the 4th place overall effort of soph Cassie Ward's 19:59  In the Varsity Girls race, Chestatee got some payback on the NEGA course from 8 seasons ago as the duo of  Tori Mullinax and Sarah Beth English ran in tandem finding the finish line 1st and 2nd respectively in 20:33 and 20:35...But, Jefferson HS packed their squad in tighter and on a 6th runner tiebreaker took the Varsity Girl's team title. Reese Bowles of Jefferson led the way in 22:07 for the Lady Dragons. Evans HS from Columbia County took 3rd place team honors.  Alyssa Hooker (another MS runner) won the JV Girls 3K once again representing Lakeside-Evans in 12:02

MS Races-   All I have to say is watch class 3A in 2013 because North Oconee HS will have another fine addition to their team as Malcom Bridge 8th grader Anthony Potts ran unattached and slew the field in a speedy 9:56 on the Boys side and the Alpharetta Crush made a long trek across 316 to claim the team title scoring 45 points led by Davis Tardif's runnerup finish in 10:31 George Walton Academy from Monroe may have a star in their midst with Max Jani as he placed 3rd in 10:41. Lauren Olsen of Alpha Crush did her club proud winning the MS Girls Overall in 11:40. However, as usual the Athens Christian girls dominated the team competition scoring 34 points led by a trio of Lady Eagles that packed it in placing 5 runners in the top 12 led by Drew Bailey (3rd) Claira Heiss (4th) and Mackenzie Rogers (5th)

Boys-  2 of the best Boys Cross Country teams in the State dueled at Our Lady of Mercy this past Saturday including 6A Norcross and perennial 4A power Marist. Marist did not run at full strength but it may have made little difference as Norcross came out and ran as to prove their 3rd place Podium finish in 5A was no fluke with a strong effort scoring a mere 34 points enroute to the team title. The Blue Devils placed 4 runners in top 9 including Overall runnerup Arman Rehmann in 16:04 followed by teamate Nick Delguercio in 16:23. Marist was 2nd in the team standings placing 3 runners in the top 10 including Overall Champion Junior Michael Thurston who came out on top after a fierce battle around the Track with  Rehmann separating just a bit the final 50 meters clocking a 16:03.34  Galloway had a s strong team effort led by Reilly Friedman's strong race placing 4th overall clocking a 16:26. Rockdale County may have had their best team race in school history  placing 4th...Interestingly enough Daniel Navarro of Marist competed in the Boys JV race smoking everyone running all by his lonesome winning in 16:20. Former Sutton MS runner Frank Pittman had a nice HS debut for the War Eagles placing 2nd in 17:44

Girls-  Katherine Yost of Norcross (The GDP's Super 6 Feature Female Runner) flat out put the pedal to the metal and disapeared from view of her challengers crossing the finish line in 18:31.53 establishing herself as one of the top female guns in Georgia. She appears to be just physically stronger than her competitors over a 5K distance giving her a distinct advantage. Catholic schools fought it out for the team title and Marist came out on top on this day led by super soph Morgan Ilse (also a fine Soccer player) as she cruised across in 19:20. Kellie Kratzenberg also chipped in with a 9th place finish to help bolster Marist. Blessed Trinity (new to 3A) bested region rival St.Pius placing 2nd with 73 points with 3 runners in the top 10 led by Bailey Willett in 5th and Natalie Kile in 7th. Devon Dabney led the Lady Golden Lions of Pius placing 6th in 20:00  Individually, Mackenzie Nail of Whitewater placed 4th in 19:32 and Rockdale County freshman Antwonette Thomas was 8th in her HS debut. In the JV Girls race Courtney Marburger of Marist took a narrow win in 21:43 over Blessed Trinity frosh Kaleigh Evans in 21:46.

MS Races-  The MS races had a few late race addtions and winning the MS Girls Overall title was Jana Morning from Cass MS in 13:19. The MS Boys race was won in a photo-finish by Holy Innocent's Ben Davies in 12:20.16 just edging Sutton's Darr Smith in 12:20.38  There was no official team scoring but Holy Innocents dominated both genders.

The Stage Races have always been unique in that its more of a speed race in the early season with a distance of 2 Miles. I remember attending a race at Boling Park back in 2003. In the Boys Varsity Races, Mill Creek and St.Pius were deadlocked after Stage 5 at 10 points each. This may be deceiving early in the fray, as some coaches may have held their athletes back from going full tilt.. Stage 5 had the only set of runners go sub 10 including winner Austin Sprague of St.Pius X at 9:47.11 Eric Westog of Mill Creek was 2nd overall at 9:52, Brian Sullivan of Wallton was 3rd in 9:57 and Patrick Fleming of Pope and Alex Grady from Newton were nearly a dead heat around 9:59  St.Pius' boys actually were tops in Stages 4, 3 and 2 led by Calvin Tirrell  in Stage 2 at 10:00, Andrew Anastasiades in Stage 3 at 10:06 and Joseph Ferrugia in Stage 2 at 10:11  Mill Creek's efforts were equally strong after Westog including Matt Tippins in Stage 4 at 10:12, Sven Hope in Stage 3 at 10:12, and Tyler Woodrome's Stage 4 10:14. Jonathan Westog did well in Stage 1 making a difference for the Hawks in 10:34

Girls-  The Team Scores may be a bit skewed as no quick score envelope was turned in by a major 6A school, however, surprsingly Roswell came out as the Girls Champ with 19 points, followed by State 5A Champ Walton at 21 and Dunwoody with 22 points...Stage 5 produced the only sub 12 times for the Girls with Dunwoody's Alexandra Cameron taking top honors with a nice time of 11:33.46  Quandra Shanks of Brookwood placed 2nd in Stage 5 in 11:40  Leading Roswell's winning team effort thru all 5 stages was Peyton Thomas as she placed 3rd in Stage 5 at 11:43, Erin Gant placing 3rd in Stage 4 at 12:34, ? Green placing 4th in Stage 3, and Erin Simons placing 4th in Stage 4. Walton was led by Alexa Womack placing 4th in Stage 5, Sara Hardin placing 2nd in Stage 4 and Christie Sanders winning Stage 2 in 12:45