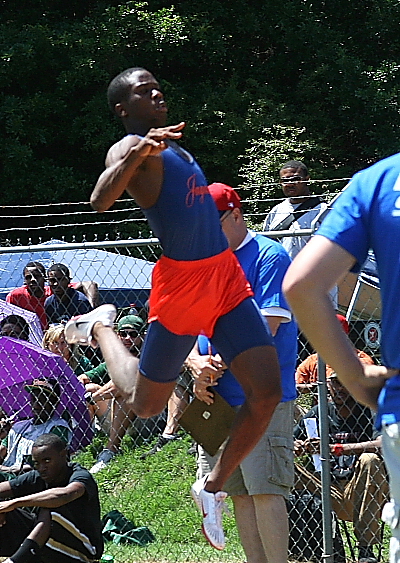 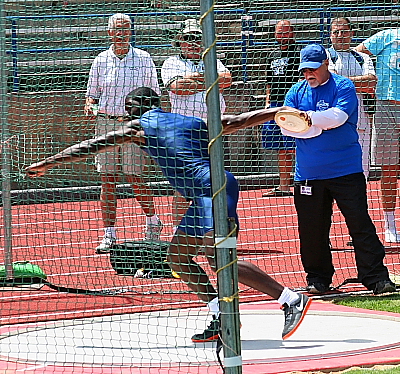 Athens Christian gouged out 50 points, 49 of them coming from the Field as they won 4 gold medals including perhaps 2 surprising ones. It could have been worse if big man Jordan Pickerall had made it out of Sectionals in the Discus, but he redeemed himself with a heave of 52-11.50 to capture the Shot. Demetrius McWhorter (a frosh) had a big performance the the TJ winning with a bound of 45-04. Senior Zach Lillie took a surprising win in the HJ after clearing 6-6 and 7-0 leaper from Warren County (Edricus Williams) had a rough go failing to clear 6-06 safely and injured himself on the bar in his final attempt. Levi Cummings had been suffering from a nagging hamstring injured at Region 8-A but vaulted well enough to take the title in 13-6. Another freshman made some noise for ACS in the discus as Joseph Ruggiers had a timely toss of 140-6 in his next to last attempt to surge into 2nd for 8 more points. Whitefield on the strength of their 1600 duo is at 26, Darlington had a nice outing with 25 and former state champ Jenkins County is a point behind at 24 picking up all their points in the Throws.

2 other athletes having big days on the Field were Marico Askew of Mt.Zion Carrollton as he stretched out to 22-6 owning the LJ and James DeLoach of Jenkins saved his best for last letting fly a toss of 156-05 winning the Discus and taking 2nd in the Shot Put.

The 1600 meter race was prophetic as Whitefield Academy swept the race scoring 18 points as Cameron Thornton closed out his GHSA career with the win in 4:20.74  with teamate Robby Keough sailing past Brad Gossett of Wesleyan (who pushed the race taking over the lead at 600m) 10m from the finish line clocking 4:21.56. Cameron Collins hung in tough placing 4th holding off Galloway's Calvin Henry.

Coming out of Day 1 North Oconee struck for 27 points led by Kawon Bryant, Alex Noakes and Issac Toney followed by Pierce County with 18 (thanks to Quayvon Wright ) followed by Westminster and Hart County locked up at 16 and Oglethorpe boasting 15 points along with host Jefferson. Let's look at the events individually for starters...

In the Throws Wright of Pierce came up big winning the Discus with a 155-03 mark and followed that by seizing 2nd in the Shot Put at 52-01.25. Dakota Ball of Pepperell however won the steel ball toss recording a 54-05.50 with Noakes of NOHS placing 4th.  Jared Scotland of Hart County easily won the PV clearing 14-7, but the Titans of North Oconee grabbed 8 points thanks to Issac Toney on misses with a clearance of 13-6.   Jefferson racked up 11 points as they are traditionally very strong in the vault as Mason Hamrick cleared 13-6 and James Howard 13-0. Demetrius Sanders came throgh for Elbert Co. winning the TJ in 45-11.50 with Bryant of NOHS scoring a runnerup position with a mark of 44-07.75 (and placed 3rd in the LJ)  Maurice Freeman of Oglethorpe Co. won the HJ as expected with a clearance of 6-8 and Keyth Fightmaster of Calhoun placed 2nd on misses at 6-6. Darius Wright of Screven County took the LJ gold jumping 21-7.

The 1600m race was Jordan Flowers of Westminster from start to finish as he was just too strong, created separation early of up to 25 meters and never let anyone challenge him. Joey Ronca of Decatur passed East Jackson's Cale Pirtle just before the finish line to seize 2nd in 4:28.51.

Westover had an absolutely GREAT day on the Field scoring a whopping 40 points led by perhaps the most outstanding performance of the day maestroed by Dontrevious Ously as he unleashed a beastly 1st thow in the Discus of 192-05 changing the mood of the competition in the event. Davonta Brooks of Burke Co. also was most excellent with a 2nd place mark of 171-8. Ousley's teamate Derrick Akins added 5 huge team points placing 4th. Shawayne Lawrence of Eagle's Landing placed 3rd in the best Discus event of the day by far...

The Pole Vault can be a hit or miss affair and this day was no different as Allatoona's Tray Oates and Westover's Dolphurs Hayes rose to the challenge in an underdog capacity battling it out after the 1600m run was done. Both cleared 15-6, but Oates took the gold on misses. Tyler Craig of Pickens Co. placed 3rd at 14-0. Jonathan Jones of Carrollton was Mr.Clutch in the LJ as he won the competition on his final jump at 23-11 overtaking Damarcus Simpson of Lafayette at 23-9.25. Lambert of Burke Co (55-9.75). wasn't through as he won the Shot easily with Lawrence of Eagle's Landing exploding for 2nd at 52-8.5. Don Mills added more points for Westover placing 4th...There was a mild upset in the TJ with Towers' winning in 46-3.75 over Montrez Kitchens of Burke County.

Grady's Zane Coburn was not going to let anyone beat him today in the 1600m. After someone popped out early, he was in command after lap 1, extended his lead putting the hammer down a bit in lap 3 clocking a 1:01 if the pa announcer called the split correctly and only Adam Jones of Columbus made a last mad dash for him though too late. Coburn turned in the best performance of the Ga Olympics at 4:15.29 with Jones finishing strongly at 4:17.52.

Carrollton will need to maximize their opportunities in prelims to pass Westover Saturday and with Jonathan Jones pulling the Trojan Horse its very possible...

Pope, Cedar Shoals, Marist and Kell made the most out of their opportunities Thursday. Pope or Marist will lead going into Saturday, but Cedar Shoals will have some points out there for the taking with the talented Jamario Calhoun including Kell with Devon Williams in the hurdles if the leaders make it safely out of prelims Friday.

Jordan Chambers sparked Kell's title run by doubling in the Throws with marks of 160-3 in the Discus and by .25 of an inch took the Shot Put at 54-1.50.  Jamario Calhoun of Cedar Shoals had perhaps the most impressive Field double of the day dominating the TJ at 49-09 and soaring in the LJ to 23-5.25 winning a tiebreaker over Kenneth Sims of Tri-Cities. Austin Eckenroth of Flowery Branch vaulted far below his pr, but it was good enough for the gold at 15-5.75 Nathan Daniel of Marist brought his 'A' game with an impressive runnerup finish of 15-0. Jalen Langston of Chapel Hill cleared 6-8 winning the HJ competition followed by Pope's Austin Card at 6-6 bolstering their team efforts.

The 1600m was a classic and a great example of what Sectionals have done for the Sport. Brandon Coombs of Greenbrier took it out early and there was a tumble on the backstretch by Warner Robins. Brad Hort of McIntosh moved up side by side with Coombs at the 800m split. Sid Vaughn of Lakeside-Evans was in tow and biding his time drafting the leaders looking relaxed was Pope's Patrick Fleming. As the bell sounded Fleming swung wide in lane 2 jetting by everyone and began a drive that maybe startled the leaders as he quickly built a 10m lead and continued to accelerate with only 100m left and was too strong for Coombs and Vaughn to make a run at him winning the gold in 4:18.10, Coombs 2nd (4:19.55)

Having the lead in this class typically doesn't mean much with the talent qualified for Track events out of Sectionals. Dacula took advantage in the Field and leads with 25, however, Brookwood's 18 points are very big with the 3200m left and some points available in the Track events Saturday. Coffee County ain't looking shabby at all with top ranked sprinter Tyreek Hill capable of doubling in the short sprints.

In the individual events Tyreek Hill of Coffee exploded off the board destroying everyone by 1'3"  with a jump of 23-11  Brandon Goodman of Etowah brought it in the HJ clearing 6-10, but it took less misses to best Brookwood's Bilal Abdullah also at 6-10. Shaquille Bryant of Tift County won the Discus with a mark of 164-11 besting nearest competitor Trevor Joyce of Mill Creek who gave him a scare with his final attempt marking a 161-02.

James Wenk of Harrison was flawless as he cleared 15-6 with no prior misses winning the PV over Matthew Morris of Peachtree Ridge at 15-0. Wenk also had the top PV performance of the day getting him some extra recognition Saturday! Justin Grose of Brookwood was fun to watch and he cleared 14-0 adding 6 points for the Broncos,,, Willie Clayton of East Coweta brought it on Thursday and won the Shot competition with a mark of 54-7. Malcom Jackson of North Gwinnett dominated the TJ winning by nearly 2' with a winning bound of 48-1.50.

The 1600m was surprising, but more so perhaps for the fans as 2 athletes had great race plans and executed them to perfection. This race started off very pedestrian with a 1:06 lap 1 split and that gave favor to the kickers. Brickell made a move right at the finish line with 800m left and began a drive to separate himself from the pack relying on his endurance. He literally attempted to run away from a trio of runners including Yoonis and Sullivan who are both very strong in the 800m and built a lead with a lap left of 12-13 meters. With 325m left Yoonis and Sullivan both hit another gear and began to slowly track Brickell with Yoonis closing within 5m with 100m left. Josh began to breakdown the final 50m as Adel and Brian passed him looking very strong with Yoonis taking the win in 4:16.23 and Sullivan 4:17.50 followed by Brickell in 4:17.94.