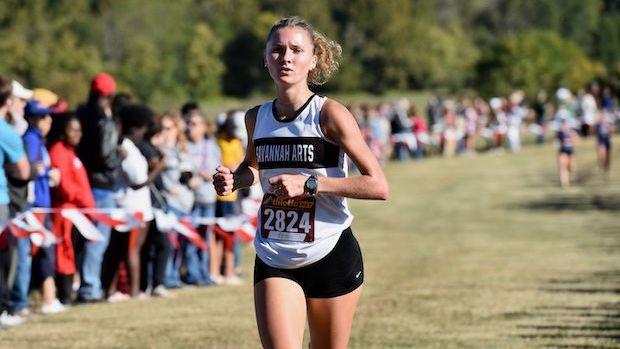 Margaret Wade is one of the best runners in the state and if you didn't know that already, you do now. The senior from Savannah Arts Academy has been making waves for a while now, but this was definitely her best showing yet. She just finished runner up and the Asics Invitational this morning with a time of 17:37.12, the fastest time for 5k in the state so far this year. Wade has been coming along for a while now and has been trying to bust out of the shadow of other runners. She was 3rd in the 3A girls race at state las year and then won the 3200 but finished runner up in the 1600 in a phenomenal time of 4:55. This year she's made it obvious she wants to be on top and she made a statement with her win at Carrollton Orthopaedic earlier this year in 19:16. She's clearly a force to be reckoned with right now, and not even a Hurricane could derail her plans.

With Hurricane Ian creating so many last minute changes, Savannah Arts made the trip to Fairburn this morning to race one of the fastest courses in the state and all of the top teams who had nowhere else to race. And Wade did not disappoint as the top Georgia Runner. But there was another girl who broke 18:00 from Georgia (4 girls total) in Shelby Green. In total 30 girls broke 19:00 in the Championship race while 47 boys broke 16:00 in the championship race.

Check out all of the action from Asics Here: