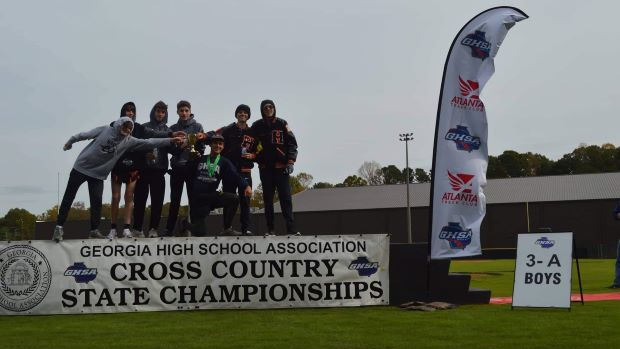 Hart County celebrtes on the podium. Photo by Tanya Benner

Path to the Podium: Hart County Boys, by Andy Christie

We've asked coaches to reflect on what it took to get their team to the podium at the 2021 Georgia State Cross Country Meet. Next up is Coach Cecil Marett of Hart County, to talk about his boys 3rd place finish in the Class AAA State Meet.

The Hart County Cross Country season really started with the 2021 track season. Then juniors Diego Martinez, Zach Benner and Cole Risner started pushing hard in their distance training. These three young men had a mission in mind that went further than just track season. The track team had a great season that culminated with a podium finish in Albany.

We had to push our summer training back due to several factors. But the seniors stepped up and set the standard of expectations for the team.

We had three new additions that helped tighten up our top 7. Sophomore Braydon Lane rejoined the team after taking his freshman year off while the freshman duo of Nate Harris and Donivan Layman came in with a great work ethic.

As the summer progressed we felt good about being the top two in the region and hoped we could find enough speed to grab the championship. We still had not set a State goal yet.

Our boys pushed distance hard as the summer progressed.

Our first meet was to be our home meet, but the weather had other plans.

Our first meet was at Athens Christian and there junior Thomas Floyd showed that he still belonged in the top seven. I guess it was after the second week of meets that we realized this could be a special season. We started looking at the rest of the state and set our sights on the first boys podium finish in school history. Diego maintained his steady progress. Zach, who had never ran until his junior season, was dropping some great times and the new guys began to understand competition on the high school level.

At The Northeast Ga meet we had a first to occur: half the team missed the start!  But Diego, who started 1:10 after the field still finished inside the top 30. He was the talk of the meet for many reasons. After that meet we had a heart to heart about expectations of leaders on the team. This is when the seniors truly stepped up.

We lost a senior that we were counting on to help us through but he decided not to run his senior year.

Zach Benner developed a stress fracture at Asics. At this point we were all wondering if we could make the magic happen. However he rehabbed hard and spent hours in the pool and on the bike!  But we still would not have him for Region, which we knew would not affect our overall placing at Region.

I think the biggest motivator we had was our past and the runners that had led this group before. We had alum Sam Garringer calling the seniors weekly and pumping into them that the dream can be a reality with hard work. The final motivator was when Zach was able to train with the team again. This was the one piece that the team knew we needed to reach the podium.

I think the biggest motivator for this team was that they knew that it was about more than any individual; it was about all 20 of the guys on the team.

The 3A boys race from state