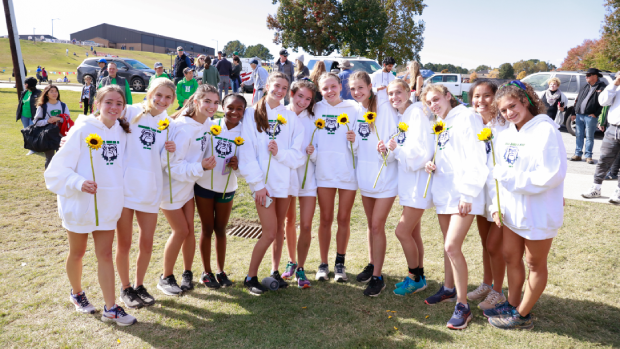 The Harrison girls at awards after the race. Photo by Melissa Moody

Path to the Podium: Harrison Girls

We've asked coaches to reflect on what it took to get their team to the podium at the 2021 Georgia State Cross Country Meet. First up are co-head coaches Kent Simmons and Jason Scott from Harrison, to discuss their State Runner-Up finish.

Coach Simmons: This was such a strange season.  Our approach was so different because we treated each meet as if it would be our last meet.  Going into State, we had very low expectations for our girls.  At Coach Wood, we finished somewhere around 14th/15th with around 7-8 7A schools ahead of us.  So we hoped for a top 10 finish and thought that 7th was going to be a good day.  At region, we finished 3rd and thought that was great.  Then at State, we had the stars line up for us.  We raced well and a couple of teams had some bad luck.  We finished 4th and you would have thought we won based on the reaction from the girls.  They were so excited and were happy to prove us wrong for doubting them.

*Coach Scott cited Allison Baker as a senior that set a good example for the rest of the team.

Coach Simmons: At this point, we realized that GHSA was unlikely to cancel the track season.  So our focus became less on "today may be your last race" and more on let's see what we can accomplish.  We decided to really push the 4 x 800 since it fit our team's strengths...we were deep and had some talent.

Coach Simmons: As the season emerged, we knew we had a top athlete in Riley Perlakowski.  We also knew we had a decent shot at making podium at State in the 4 x 800.  During the course of the season, Samantha McGarity emerged and Riley started setting and breaking her own school records.  Samantha doesn't like to lose.  So no matter what race she was in...she competed hard.  She became our solid #2 800 runner.

Then that success led to our other girls stepping up their performances.  It really built on each race and they each pushed each other.  We utilized all 8 of our girls in the Region/Sectional events to get us to State.  The goal was to keep Riley and Sam as fresh as possible.  Kate Curtis just missed qualifying for sectionals by a fraction of a second (to Sam).  Her sister Riley had emerged as our starter.  She is another one who is fiercely competitive and she refused to let anyone get to much in front of her at the start of races.  So her times kept improving with each race.  Anyway, this group ended up winning State in the 4 x 800.  Riley won both the 800 and the 1600.  Samantha made it to State but her inexperience showed and she did not make finals.  That lit a fire under her.

Coach Scott: Madisson Troupe, Ava Quinto, and Tessa Aten were new additions that changed the outlook for XC. Early goals were to win Region and podium at State, which are always our goals. The summer was pretty normal; nothing special this summer. Kate Curtis had some hip issues at the end of summer/beginning of fall that provided a challenge to be overcome.

Coach Simmons: Over the summer, our team did our usual summer runs.  We were no longer limited by any Covid 19 restrictions so we did our normal summer training except we did not do a team running camp. The girls that graduated were talented (Riley P and Allison Baker who is running at USC Upstate).  They left behind a legacy of hard work.  Our team that was coming back look like a strong 4 and we would need someone to emerge as our 5th runner.  We had our Jr. Hoya camp and saw some potential in a few of the new 9th graders but still felt that was an open spot.

Coach Scott: Samantha McGarity obviously changed the outlook. Was 17th as a freshman, made a 2+ minute improvement at State. Ellary Hackworth emerged late in the season as a solid #2 late in the season with an 18:55 at Region. Captain Marley Hess also made a huge push at the end of the season to solidify the #6 spot and help give our team some state meet experience that we needed on the back end of our squad.

Our goals are all season ending. Each race is a learning experience. How do we race individually and as a team? Can we learn to race together?

About midseason we began to think higher than just making the podium and started to believe we could win.  We did lose Tessa Aten (#5-7) for the season to injury, and all of our top 7 at one point had to take time off due to injuries.  However, this team had that special bond where they really wanted to run for each other and they really got along well with each other.  We've had really good kids before that just couldn't get along with each other and they couldn't find success.

Coach Simmons: I have to admit...we had 2 upperclassmen girls emerge this season that we did not see coming.  Ellary Hackworth was one of the 8 girls on the 4 x 800 team but she was probably #7.  Her XC career had been mixed...she had some injuries and never quite worked her way up to the top 7.  She had some talent but we just had not seen it fully trained.  However, she now had a good full year of training with no injuries and she did the work over the summer.  Marley Hess had success as a freshman and ran for us at State in 2019.  But since then she had plateaued and was not showing any signs of improvement.  In addition, she was fighting some lower leg issues.  Over the season, she added an iron supplement to her diet and it made a huge difference.

So at the start of the season, we were hoping for a top 7 finish at State and thought we would finish 3rd in region behind Marietta and Hillgrove (we were right!!).  Then Samantha just starting shattering some times...in our time trial...we were like..."Hey...she looks good, that's one of our fastest times".  Then at our Hoya 2 mile invite, she won the race.  Jason and I looked at each other and said...wow...that was some good competition she just beat.  It still just 2 miles but she is impressive.  Well, it continued.  At each race, she gained valuable race experience and got better and better.  Her first 5K she broke 19 minutes.  That was over a minute faster than last year.  Then she did it again.  Then in Huntsville, she set our new school record by 19 seconds.  Her best learning experience was a Coach Wood where she went out with the leaders (Ruby and the Pace girl) and then hit a wall at 2 miles.  But it was great experience for her because she had to push through it.  Anyway, she won region easily and then had a great race plan at state.

But our team was not just Sam....Sam emerged as a solid low spot for us.  Our key was Ellary.  Ellary became a solid #2 for us.  She also broke 19 minutes and finished 3rd at region.  On the Monday before State, she stepped wrong and twisted her ankle.  It was a sprained ankle.  She did not run again until Thursday (1/2 mile) and then we did 3 miles on the track on Friday just to make sure she could do it.  She followed the doctor's and trainer's treatments and she was ready for Saturday.  At State, we knew she was our key.  And she delivered.  She was our 2nd finisher that day and helped lead us to the State runner up team finish.  We were close to Marietta because of her toughness.

But again...there are 3 other girls who had to run well.  About halfway through the season, Lidia Longo came to me and said she thought we could win State.  I told her that we needed to focus on the team in front of us (which was Marietta at the time).  I said if we can get them...we will see what happens.  Lidia also does gymnastics and she ended up getting a concussion at the halfway point of the season.   She and Kate Curtis were our 3 or 4 depending on the week.  So we had to get her well and recovered before we could think about State.  She ended up sitting out region so we could ensure she was fully recovered from her concussion for State.  Kate was a solid and dependable performer for us all season.  Then that #5 spot was critical.  At Coach Wood, it really hurt us.  We had a huge gap from 4 to 5 and it hurt us.  We focused on that for region.  Even though one of our top 4 was not competing we still made that spot an emphasis.  Marley stepped up.  She was our #4 at region and helped us finish 3rd.  Then one of our freshmen girls Madisson Troupe was our 5 at State right in front of Marley.

We battled like crazy at State.  It was really close but Marietta had the edge.  We celebrated like we won because each person made a critical contribution to our 2nd place finish (and it was the first time we beat Hillgrove head/head all season).
Harrison girls team Interview
Tweets by GAMilesplit