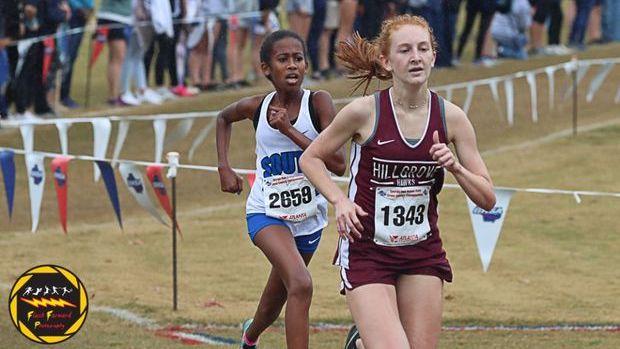 Ava Brooks will try to lead Hillgrove to their 2nd Cobb County title in 3 years. Photo by Marc Logan

The Cobb County Cross Country Championships are back and on paper, look just as competitive as ever. But we all know that the races do not always shake out like they are supposed to on paper. That is why we run the race!

On the girls side, the girls from Marietta will look to defend their 2020 county title. In the past 10 years, Coach Coleman has won 6 Cobb County girls team titles, winning 5 of the last 6. This year looks to be more of the same with his girls once again in the mix. Marietta is led by junior Kristal McQueen who looks to improve on her 10th place finish from last year. She is followed closely by freshman Maddie Jones who also has the potential to finish in the top 10. Marietta's weakness looks to be in the all elusive 4 & 5 runners. If Coach Coleman can close the gap, then expect the Marietta girls to defend their 2020 team title.

Looking to dethrone the 2020 county champs are the girls from Hillgrove and Pope. Hillgrove girls have finished no worse than 3rd as a team the last 5 years at the County meet and are the 2019 county champions. They are led by senior Ava Brooks who is the lone returner from the 2019 team who were County champs. She is followed closely by a trio of juniors in Reese Terza, Gaby Osornio and Meghan Flanagan and senior Kaeleigh Brooks. This group boasts a top 5 spread of 60 seconds and is the smallest gap of any team in the field. If the girls can keep this gap small, then we could see a repeat of the 2019 results.

Coach Monk has the Pope girls off to another great start. On paper Pope boasts the three fastest girls in the field in Lorel Golden, Charlotte Dunn and freshman Addison Adair. If these girls can finish 1-3, then the County championship could be headed back to Marietta. Pope's 4 and 5 runners are both seniors and their experience could be a deciding factor on Saturday.

One team who is a darkhorse to upset all the team mentioned above are the girls from Allatoona. On paper, this squad has the potential to compete with the previously mentioned teams. After a slower start to the season, Coach Parsons hopes to have his girls progress each week to run their best in November. The Allatoona girls know this course and have experience on their side. If they can keep a tight pack and move up in the second half of the race, they could see themselves hoisting the trophy on Saturday. James May will try to help Marietta defend their title. Photo by Marc Logan.

Over the past 10 years, the County meet on the boys side has been dominated by Marietta, Harrison, Pope and Walton. Marietta has won 4 boys county titles, Harrison has won 1, Walton has won 2 and Pope has won 2 in the last 10 years. It looks like we could see more of the same this year with Marietta, Pope and Walton all looking like they have a chance at a top three team finish. One team who is more of a newcomer to the part are the boys from Hillgrove.

The Marietta boys were the 2020 county champions and they look primed to defend their title this year. County is a priority to the Blue Devils as evidenced by past years results so expect the Coach Coleman to have his boys to be ready to roll. The Blue Devils are led by arguably the best 1-2 punch in the State in James May and Jared Fortenberry. While neither athlete has broken 16:00 this year, they have in years past and it is only a matter of time before that happens this year. Marietta's 3-5 runners all have chance to finish in the top 10 and if they do, they will be very hard to beat.

Looking to spoil the party and dethrone the 2020 county champions are Hillgrove and Pope. After a challenging year in 2020, the Hillgrove boys returned 6 of their top 7 runners and are now a more experienced team. This experience has paid dividends this year after a 3rd place finish at the Cherokee Classic and a runner up finish to Marietta down in Jekyll. The Hawks are led by the senior duo of Nino Madeo and Brian Niswonger. Following up these 2 are a mix of 5 runners who have been trading places all season. If the Hawks want to challenge Marietta, they will need their 3-5 runners to move up.

Another team in the mix are the boys from Pope and after winning team titles in 2016 and 2017, Coach Monk has shown that they have what it takes to challenge for the top spot. The Greyhounds are led by Carter Spohn who finished 18th last year but has since established himself as one of the top runners in the county and in 6A. He is followed closely by fellow junior Benny Brenneman. There is a slight gap between their 2 and 3-5 runners but if this gap can be closed on Saturday, the boys from Pope could hoist the trophy once again.

On paper, teammates Lorel Golden and Charlotte Dunn are favorites to push each other for the County title. Lorel is the only runner in the field who has broken 19:00 this season running 18:57 at the Cherokee Classic. Charlotte most recently beat Lorel this past weekend in Carrollton which shows that either athlete has a chance to take home the individual title. Teammate Addison Adair, who is only a freshman will also look to factor into the individual race after running a season's best of 19:14. Hillgrove senior Ava Brooks boasts the fastest lifetime PR of 18:48 and after running 11:00 for the 3200 in the spring will look to insert herself in the mix for the individual title. Fresh off a win at the Jekyll Island Invitational, Ava has shown she has what it takes to win races. Another runner who cannot be overlooked is Marietta junior Kristal McQueen. Kristal has the 3rd fastest lifetime PR and is only one of three girls in the field who has ever broken 19:00. Other runners who look to place in the top 10 are Reese Terza (Hillgrove), Elizabeth Shaylor (North Cobb Christian), Gaby Osornio (Hillgrove), Maddie Jones (Marietta), Daniela Delgado (Walton), Kaeleigh Brooks (Hillgrove), Lilla Kate Tucker (Campbell) and Meghan Flanagan (Hillgrove).

Just like in the girls race, it looks like it could be two teammates battling it out for the individual county title. James May and Jared Fortenberry are the class of the field as they are the only 2 runners who have broken 16:00 previously. In their three races this season, James has gotten the best of Jared but I fully expect Jared to push his teammate to the brink on Saturday. After a 14th place finish at last years county meet, Carter Spohn of Pope looks to improve drastically on that and crack in to the top 5. Carter ran 4:31 for the 1600 in the spring and 16:23 this year, so it appears he is ready for the challenge. After a subpar junior season, senior Nino Madeo looks to be back on track after a stellar sophomore season where he placed 19th at the county meet and ran a season PR of 16:39. Wanting to end his high school career on a high note, look for Nino to put himself in the mix from the beginning. Benny Brenneman of Pope is the only other runner in the field to have broken 17:00 so far this season. He will look to help teammate Carter Spohn lead the Greyhounds. Other runners looing to place in the top 10 are Cade Mayfield (Marietta), Brian Niswonger (Hillgrove), Matthew Tate (Wheeler), Hines Doyle (Marietta), Joseph Minecci (Walton), Jack Baltz (Marietta), Beau Baker (Hillgrove), Wylie Bingham (Walton) and Jackson Ruddell (North Cobb Christian).