Jada Warren from GMC is one of the girls winners this week. Photo by Marc Logan.

This weekend certainly was packed with fast racing, with Carrollton Orthopaedic, Gwinnett County Championships, Milton XC Invitational, and Big Peach Mustang Stampede all held during the same weekend. In addition, Georgia runners traveled to Florida, Virginia, South Carolina, and Alabama to race as well. It seemed as if every team in the state raced this weekend! The times certainly lived up to the hype, from Joe Sapone's blistering 15:26 at the Chickasaw Trails Invitational in Alabama, to Caroline Hood taking down a loaded Championship race at Carrollton in 19:03, a time usually unheard of this early at the state course in September. With all of this fast racing, however, many incredible performances naturally fall through the cracks. This article series is about recognizing some of these achievements, whether they came at a smaller meet or were buried in the results of a huge meet. This week, there's a special focus on smaller schools (4A or smaller), as these are the schools most likely to be overlooked even in articles like these! Cutting to the chase, here are the Diamonds in the Rough for week 4.

Hallar came into the season after a successful sophomore season where he finished 8th in the state meet for 1A Private, but only broke the 18:20 mark once last season. Well, make that twice in two tries this year for Hallar, who followed up a 17:29 PR on August 21 with a 2nd-place finish at the GMC Bulldog Dash. This race was enormous, with 22 teams and 242 individuals competing in the boys 5k. Hallar should be considered a contender to win the 1A public state title this fall. 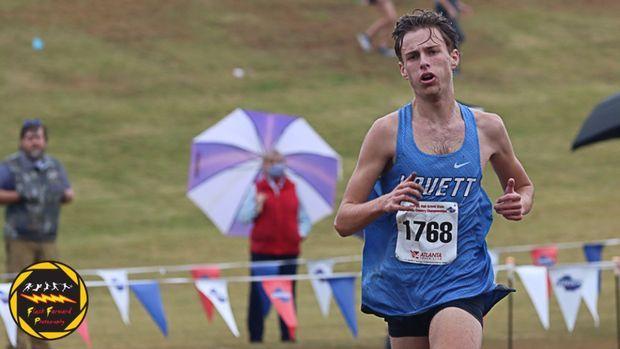 This was a great week for 2A racing. At the Carrollton Invitational alone, Edward Blaha finished in 16:13 and Simon Schabort was just behind in 16:29, while Buck Ledford of Banks County raced to the victory in the Small School race in 17:00. However, all of those runners are somewhat established commodities. Shurling, however, had never broken 17:50 until late in his junior season (last year), and has continued to improve this year, with a massive 16:30 personal best time at the quick Big Peach Mustang Stampede, leading Lovett to a 2nd-place finish.

Dawson County has a history of churning out great XC runners, and this year is no exception. Stepping into a leading role for a Tigers squad that lost its top 3 runners to graduation coming into this season, Smith has only improved. Not only did he nearly set a PR with a speedy 16:57 time, he also took down last week's 3A honoree Stephen Clark, two weeks after Clark had beaten Smith by 40 seconds. Smith should be in contention for a top 5 slot at this year's 3A state meet.

Just like the men's field, the women's field was very large at the GMC Bulldog Dash, with 146 runners representing 26 schools. Warren took on the lot, and she was just one runner short of winning the meet. Smith is no stranger to winning races though, as she won an incredible 7 races last year while never finishing lower than third, a streak she has kept into the 2021 campaign. At this rate, the only question left might be whether she will take home the gold, silver, or bronze in November.

Wright may have accomplished an unprecedented feat this past week: finishing in the top 6 of two races in the span of just three days! On Tuesday, Wright finished 6th at the competitive Cookies 'n Quotes meet in Tallulah Falls, where one can only imagine the hills. She followed up this performance with an even more impressive one on Thursday by earning fifth place at the North Hall invitational in personal-best fashion. Congratulations for this achievement, and at least she was given a well-deserved weekend off from racing!

Druid Hills had not run a race (at least on MileSplit) this season until this past week at the DeKalb County Meet #3 on Tuesday. Blount, a senior team leader for the Red Devils, made the most of her first race in 2021. Her time of 21:28 was not only a personal best, but led the rest of the girls by 45 seconds, and was good enough to finish among the top quarter of the boys' field! Blount will be a dark horse in the 4A field worth keeping an eye on the rest of the season.