Mill Creek's pack was just too much again this week. All Photos by Alex Burst.

The 46th annual Gwinnett County Championships are in the books, and as one coach said, the weather appeared to be the nicest it's been (at least for the varsity races...) in a decade or longer.  This led to some fast times and aggressive racing.  Nathan Solomon of Shiloh and Ellie Brewer of Hebron were the individual champions - Interviews here- while Mill Creek's boys and North Gwinnett's girls inked their historic performances and established themselves among the best squads in 7A.

Varsity Girls Individual Race:  The race opened up aggressively with eventual winner Ellie Brewer opening in 5:50 with Emma Geaney from Parkview hot on her heals in 5:51.  A pack of girls including Brewer's teammate and last year's champion Brooke Browning, Brookwood's Allie Wardle, Parkview's Haley Primm, and Mill Creek's Emily Guy followed closely behind, all sub 6:00 through the mile. 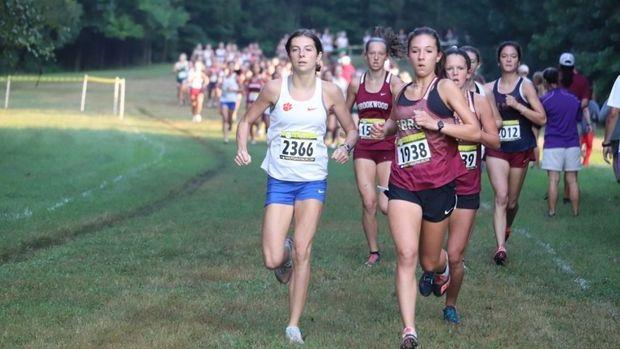 Upon their emergence from the woods, it was clear that this was Brewer's race to win as she opened up a gap on the rest of the field.  She would not be denied today, and at this point, it became a war of attrition for those who tried to race her early while the "chase chase" pack, including eventual top 5 finishers Kyra Andrews (Norcross) and Emily Cragin (Archer), ran a more patient race and were able to catch the faster starters.  We know how these races go.  Sometimes the aggressive strategy prevails, and sometimes it doesn't.  You know what it leads to though?  A very entertaining 3rd mile (to watch... not to race...) where it comes down to guts and fitness.  Brewer's win of 19:06 is the fastest since 2018 (Chloe Hetherington of Mountain View), and the top 9 all broke 20:00 for the first time since 2016 - showing that both the weather and the talent level were on point at the Georgia International Horse Park.  Kyra Andrews mounted a huge comeback from behind to take 2nd while Emily Guy outsprinted Allie Wardle (both aggressive from the start) for 3rd and 4th.  Emily Cragin and Emma Geaney took 5th and 6th while defending champion Browning earned another top 10 finish en route to 7th.  Teammates Jaimie Chen and Haley Primm destroyed each other like bitter enemies to run away from North teammates Ellie Brink and Tori Meyer along with Kallie Henderson of Mountain View.

Varsity Girls Team Race:  This was all North Gwinnett.  Nobody else on their best day was going to touch the Bulldogs.  Brink and Meyer took 10th and 11th overall to begin the onslaught (and did great battle in the chase pack, too!).  What followed was just too much for any other team to handle as Maddy Tilson (13th), Sacha Brickey (18th), and Marianna Gazarra (26th) rounded out scoring for a team that had a 1:10 split from 1 to 5 yesterday.  Add in the fact that Gazarra will have faster days ahead, and this is a dangerous, dangerous team in 7A this season.  Coach John Rowland said (and Coach Chris Carter liked) "The girls have been working hard since the beginning of the summer, and it paid off in a hard fought victory.  We are excited for our seniors who have been close to a championship for the last couple of years, and now they are the Gwinnett County Champions.  This team has big goals this year, and this is the first step to accomplishing those goals."  Brookwood's girls showed up big as their 2-5 pack of Macy Felton, Hannah Mobley, Addy Keszler, and Jillian Rovie all came in within 1:17 of each other, showing that this is way more than just Allie Wardle's team.  Norcross and Parkview were next, split by a single point in vastly different scoring situations.  Mill Creek's 5th place effort won't be their best showing of the season, indicating that we could see half of the top 10 teams in 7A come from Gwinnett County this season come November.

Varsity Boys Individual Race:  Similar to the girls' race, the boys race went out hard.  Opening in sub 5 at the Horse Park isn't an easy feat, and the entire top 5 boys were in the top 5 through 800m of the race, and all opened sub 5:00.  These 5 would continue doing battle all through the woods.  When they came into the sun, Nathan Solomon of Shiloh and Miles Ferguson of Archer had opened up a gap on Ethan Nordman (Mill Creek), Steven McCartney (Archer), and Caden Hall (Parkview). It was clear that it would come down to Solomon and Ferguson while the rest would try to battle for 3rd.  Ferguson gave Solomon everything he could, but when it came to the kick, Solomon showed another gear that couldn't be matched.  His winning time of 15:48 is the 3rd fastest winning time in the last eight years and the second fastest at the Horse Park (Myles Collins ran 15:30 in 2019... Kevin Mills went 15:37 in 2013, but that was at River Green).  Ferguson broke 16:00 to take 2nd place.  Nordman, McCartney, and Hall rounded out the top 5 to all break 16:30.  It was fun to watch all 5 open up together and then see who could withstand the early pace.  Mill Creek's Luke Kalarickal, Shiloh's Andy Salgado, Mill Creek's Shahzeb Rashid and Jake Peters, and North Gwinnett's Yianni Pothoulakis rounded out the top 10.  As you can see from all the "Mill Creek" mentions... it's pretty easy to see how they won this race so handily...

Varsity Boys Team Race:  This was a dominant win for the #1 Class 7A Mill Creek Hawks.  Joseph Kim's 12th place rounded out the top 5 for Mill Creek to put them at 38 points for the decisive victory.  They established early on that they wouldn't be bowing down to anyone yesterday.  Coach Christie said "The guys are completely focused on maximizing the team's potential, so I'm thrilled they were able to win a County Championship.  It's still a long way to November, but it was nice to see them win what for us is a badge of honor.  I am particularly impressed with their selflessness; they have individual goals, but as long as the team does well, they are happy.  Now we will get back to working hard to see what else we can do this season."  While the Brookwood Broncos didn't have anyone place in the top 10, they got their entire top 7 in the top 24 in Jonah Harper (11th), Marshall Bray (14th), Kingsley Doyle (16th), Peyton Harley (19th), Benjamin Roberts (22nd), Charlie Thomas (23rd), and Austin Dezwart (24th).  Archer, North Gwinnett, and Parkview rounded out the top 5 teams, and that trio were separated by only 13 points also showing that Gwinnett could have a strong team presence in the 7A boys picture.

Great stuff at the Georgia International Horse Park and other places around Georgia yesterday!  There is a lot of racing left to do this season, and it will be a lot of fun to see how things begin to take shape as the true "meat" of the season is upon us.