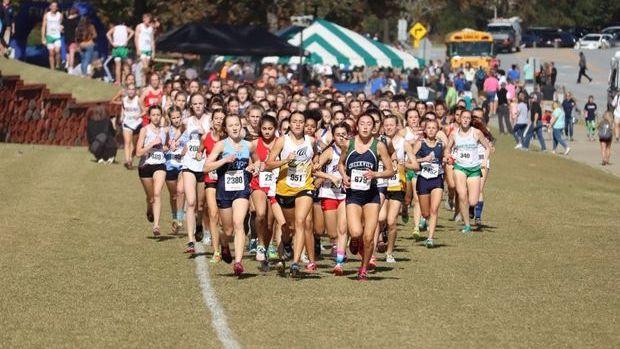 The Start of the Girls 6A race last year where Makena Gates was a superstar. With her graduating, who will win it this year?

Sticking to a similar theme from the Boys' preview, glancing at the Top 20 girls from the State Championship last November, there were only 5 seniors in that group. Makena Gates had a very decorated career while running at Creekview. Her performance last fall running 18:43.60 at Carrollton and winning by over 50 seconds was definitely impressive. Finishing 3rd and 4th were 2 runners from Pope. Sophie Boice has graduated from Pope but Lorel Golden will be returning as a senior from the 2020 State Championship Team. The Pope Girls already look to be in great form winning the Into the Trail Invitational this past Saturday with a dominant score of 26. Lorel Golden was the winner running 19:36.54. She was followed by her two teammates for 2nd and 3rd. Charlotte Dunn ran 19:42.11 and Addison Adair ran 19:56.03 Posting early performances like this could mean a potential repeat for Pope.

Last year's State Runner-up Team Allatoona looked really good this past weekend at the Zack Wansley Invitational. Coach Parson's crew ran 21:27 average placing 3rd in the meet. More impressive was the split between the #1 through #5 runners of 1:11. Allatoona was led by Mariana Bechtold running 20:58.17 and teammate Kelsey Grass right behind her at 20:59.80.

Hot on the heels of Allatoona at Zack Wansley was Brian Robinson's Alexander Cougars girls' team. Alexander had a team average of 21:29. That average was greatly helped by Brooklyn Crabtree running 19:21.00 for 4th place overall. Taking a peak at Brooklyn's performances from last season, her offseason work is showing up. One would assume it is in a family tree because of the recent graduate of Alexander Grant Crabtree who is running at Augusta University.

Cambridge girls who were 3rd place at the State Meet last year already have a team victory under their belt in this early season. They won the Pickens Preview this past Saturday with a score of 58 points. They were led by senior Kathryn Malone with a 7th place time of 20:32.8. Kathryn finished 20th last year at the State Championships. Cambridge had an impressive 51.1 seconds between #1 and #5.

Riverwood International Charter placed 3 runners in the top ten at the State meet last season. 2 of those young ladies are returning. Alexa Hoppenfeld was 2nd this weekend at Zack Wansley running 19:04.08. She finished 8th last year in Carrollton at the State Championships. Nina Ouellette wasn't in the results from Zack Wansley but had a very impressive Track season in the spring finish 3rd in the 800 (2:13.69). Riverwood placed 8th at Zack Wansley this weekend.

Lakeside Dekalb rounded out the trophy recipients last year at State placing 4th. There are no results yet posted for Lakeside. It looked as if they were scheduled to run at Marist this Saturday but that meet was cancelled due to flooding. What I did notice from last year's team for Lakeside at State is they didn't graduate one runner. All of their top 7 that ran Carrollton are returning.

Lassiter finished 7th at State last season opened its season at the Pickens Preview as well. They were led by Junior Hailey Bradley running 20:59.0. This is a program with a history of success. I am sure they will improve throughout the season.

Sequoyah finished 8th at the State meet last year. They opened their season at the Pickens Preview with a strong 6th place finish. Sequoyah was led by Ella Grace Cothren running 21:30.3 and Susanna Rogers was close behind running 21:40.4. Susana and Ella Grace have experience running at State. Missing from the results at Pickens from last year's State Team is Stella Waites. These 3 girls lead Sequoyah's squad at State last November and experience matters at Carrollton.

Speaking of Carrollton, the lady Trojans finished 9th at the State Championships last year. Carrollton also competed at the Zack Wansley Invitational this past Saturday. The team placed 6th overall. They finish 18 points behind Alexander and in front of the before mentioned Riverwood. Carrollton was led by Alexia Walter with a time of 21:30.21. Last year the team was led by Junior Mylah Land, who was the 5-AAAAAA Region Champion. There were no results for Land for track in the spring and she was missing from this race. I wonder if she will be returning later in the season. What was really impressive for the Trojans was the 36 second split between there #1 and #5 runner this weekend.