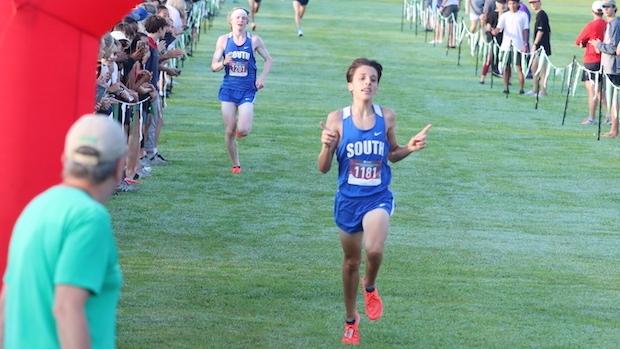 Coach Donny White put on a great Pickens Preview up in Jasper. He was very welcoming and things went off very smoothly. Fortunately there was some cloud cover for those JV races so there weren't too many casualties on a warm and humid August day.

The course is well laid out with some fun aspects to it and it's a great early season meet. Not very challenging, other than the softer ground slowing things down some.

The kids all seemed to be having fun and because it was very spectator friendly it had a very intimate feel to it and really encouraged kids to cheer on their teammates in other races. The atmosphere was great all around, congrats to everybody who was there and had fun!

The boys race got us started at 7:45 a.m. this morning. Right away Ben Bergey and Nate Verska shot to the front and set out on a quick pace. The lead pack immediately separated and actually started stringing out by the half mile with Alex Arrambide, Bryson Gate, Trent Bell, and Lyle Donovan in tow. The boys lead pack was established early on

Early on there were several teams with runners up, but it was clear West Forsyth came to play. They packed up their next 5 runners all in the top 25 running together. By the mile not much had changed as the lead pack remained basically identical with Verska and Bergey still pushing the pace. The West Forsyth pack had moved up though and now had 5 in the top 13 and seemed to have something to prove. Etowah and South Forsyth both had runners up there and seemed to be factors in the team battle. But the team that caught me off guard at this point was Sequoyah who was clearly a factor as well.

Almost nothing changed by the halfway point except that Bell was struggling to hang onto the lead pack. But by the two mile things started to shift. Bergey clearly put in a move that really opened up the lead pack. Arrambide was hanging onto Verska with Gates not too far behind, but Donovan and Bell had felt the difficulty of the increased pace. Dry Moore and Ryan McKee seemed to have gapped everybody else as well and West Forsyth still had 3 more guys in the top 15, clearly making sure they were still in the lead.

In the end it was Bergey and Verska going 1-2 with Gates getting by Arrambide late to secure the bronze. Bell had a nice kick to round out the top 5 followed by Donovan, Moore, and McKee. Andrew Balogh and Josh helms took our last two top 10 spots with a nice sprint finish.

West Forsyth ended up with four guys in the next 10 spots to take the low score of 65 points for the win. Etowah couldn't quite match South Forsyth at 1-2, but they were stronger at 3-4-5 to secure the team runner up spot while South had to settle for 3rd. Sequoyah was close behind in 4th and Gainesville rounded out our top 5 with 182 points.

Check out the interviews from our boys winners:

In the girls race it was the Yonas sisters from start to finish. Carmel and Isabel took over the lead from Ashley Thompson early on and ran side by side out front for much of the race. By the mile they had already created a gap to everybody else. Thompson was giving chase with a small gap to our next pack which included Lexi Pavese, Kelly Miles, Kathryn Malone, Cayden Crismon, and Anna Filipek. In the team battle South Forsyth clearly had the best 1-2-3 punch in the race.

But both Etowah and Cambridge had good depth and were also contending for the top trophy. It was definitely too early to call at this point in the race.

Not much changed at the halfway, but by the two mile the race started to take its final shape. Carmel began forming a gap on her little sister, but these two ladies were well clear of everybody else at this point.

Malone, Crismon, and Pavese caught Thompson and looked to make some moves on her. Filipek and Miles were also giving chase and not out of sight. Janisha Patil, Meg Lance, and Sohia Slavov all started making their bids too.

By this point Cambridge had 5 in the top 16 and had this thing mostly wrapped up. Etowah was still hanging around with their pack and South still had a strong enough 1-2-3 to be in contention. In the end Cambridge was strong enough to get the win holding all 5 in the top 16 with a pretty good team average this time of year on a soft and wet course in humid conditions. South finished with a strong 1-2-3 and their 4-5 did enough to hold on over a solid Etowah squad by 5 points.

The Yonas girls went 1-2 as expected and Ashley Thomoson held back her challengers to take 3rd. Miles came from way back to almost edge her but would settle for an impressive 4th in front of her teammate Crismon. Pavese pushed passed Malone while Lance and Slavov were able to get by Filipek as the trio rounded out our top 10.

Check out the interview from our girls team champions: