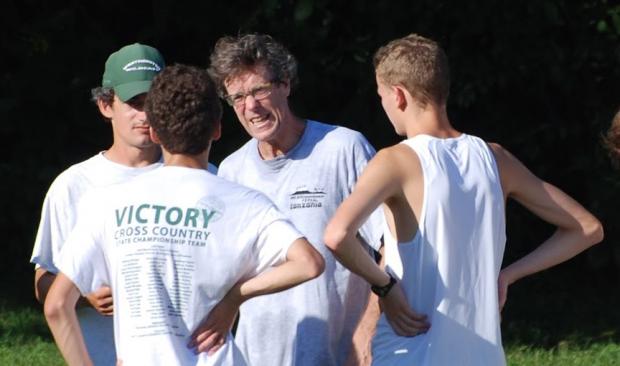 There is no doubt about it, this is going to be one of closest, most intense races of the GHSA State Championships. Pace vs Westminster, a battle of 2 powerful programs. Tradition favors the Cats', who have won 19 titles in the last 24 years. Some of you may recall their traditional 'victory twirl' on the Podium in their 'Victory' warmup tops in the early 2000's.. until the North Hall 'Freight Train of Pain' put an end to that in 2006. Pace Academy had a run of 4 state titles from 87'-94' (in then what was class A) but its been 25 years since they last tasted victory back in 1994. Do you think the Knights aren't hungry to taste victory again? These 2 schools are very familiar with each other, especially this season, as they have went 'head to head' 3 times. Pace struck first in the 'Championship race' at Carrollton Orthopedic winning by 9 points in a field of 36 teams preserving their #1 ranking that week. They collided again 2 weeks later at Wingfoot XC Classic with Westminster besting Pace by a single point in a smaller 'hand picked' field of 25 squads. The 'rubber match' came at Region 5-AAA as the Knights' took the nod by 7 points. Westminster is stronger from 1-3, but Pace has better depth from 4-7. Its a team Sport, and every runner counts, with 6,7 capable of pushing the points. Who wants it more Saturday ? Its forecasted to be a low of 38 degrees up to 53 with some breeze..

Lovett should be a strong 3rd behind Pace & Westminster. Its going to be a scuffle for the final Team Podium spot, as North Hall and Dawson County will meet for the 4th time this season at full strength. They went head to head at North Hall Invite, Runners Fit Mountain and 7-AAA (Andrew Jones of North Hall ran in the Championship race at Wingfoot) North came out on top at each, but.. at Region, Dawson closed the gap finishing only 2 points back and anything can and usually does happen at State.

The next tier of squads are all within striking distance of each other, but on the outside looking in. Including a revived Jefferson squad that beat higher ranked Hart County at Region 8, Coahulla Creek,  Pike County and Southeast Bulloch who all easily won their region meets. It should be an interesting race upfront for the Individual title in 3A boys. Andrew Jones of North Hall is a slight favorite coming in. Jones has raced thrice against Westminster's top gun Zachary Roe and won each time, but Roe has narrowed the gap down to :04 at the Coach Wood meet and will be racing with a team title at stake. Matthew Fernando of Westminster has the 3rd fastest time in 3A this season recorded at Coach Wood in 15:41. Jackson Borden of Lovett pr'd at Great American with a nice race of 15:42. George Adams of Pace seems to be peaking looking at his last 2 races with a pr at Westover in 15:53 and runnerup finish at 5-AAA of 16:01. Samuel Garringer from Hart County has raced against the big boys this Fall going 15:55 at Coach Wood. Others to keep a particular eye on are Collin Kilgore and Ben McGinnis of Dawson County, Scott Arbery of Westminster, twins Edward and George Blaha of Pace and Lane Hollis of Coahulla Creek. 2018 Westminster Girls on the Podium

One had to wonder what was going on with the Westminster girls squad through the first month of the season. Though the Lady Cats' often do not compete in an invitational until Carrollton Orthopedic, their seemed to be alot of question marks after getting beat there by 3A rival Pace Academy. In the next couple of weeks, the worm began to turn, having a solid outing at Wingfoot XC Classic placing 13th with a team average of 19:51 and have never looked back since placing 3rd at Alexander Asics and 8th at the prestigous Coach Wood meet. The Cats' should be clearing out a space in their school trophy case for a 7th consecutive title.

The next 3 Team Podium spots are in question.. Yes, Lovett and Pace are shoo-ins to climb the Team Podium once again, like they probably both have since moving up to class 3A. At region, Pace had the faster individual, but from spots 2-7 Lovett had the advantage. The monkey in the wrench could be Jefferson HS.. We've heard the Westminster 'girls course' is not a picnic, but I know the new course at Franklin County (Region 8-AAA) is pretty tough, having timed there and looking at times (its in the foothills of the mountains) North Hall out of 7-AAA along with Cherokee Bluff are evenly matched, more of an enigma is Savannah Arts and how well they can handle the hills of Carrollton, having to traverse twice a- the street hill, b- horseshoe hill and c- dreaded 'Separation Slope'.

The race for the Individual crown will come down to hill training, strength and footspeed on the flats. Mira Srinivasa of Westminster is the favorite as she emerged at Carrollton Orthopedic as the top runner for the Lady Cats' also sporting a pr of 18:20 at Wingfoot XC Classic. However, Katherine Law of Jefferson HS matched her stride for stride at Alexander Asics in the Championship race, with both clocking 18:36's with Srinivasa ahead by only .08 in a double Finish Lynx photo finish! Watch out for Westminster frosh Palmer Walstad. as she was the Region 5 individual champ having a victory margin of :20 over Srinivasa. Caylee Wagner of North Hall is the region 7 champ coming in with 4 wins and a recent pr of 18:54 at Unicoi State Park. Sydney Lamberson of Lovett has led the Lions much of the season and placed 4th at 5-AAA and turned in a 19:36 at Great American. Others possibly having an impact are: Kaylee Bandy of Coahulla Creek (2018 3200m champ), Caitlin Schroeder of Jefferson, Laura Arenth and Payton Payne of Pace and Ellie Wildman of Lovett.