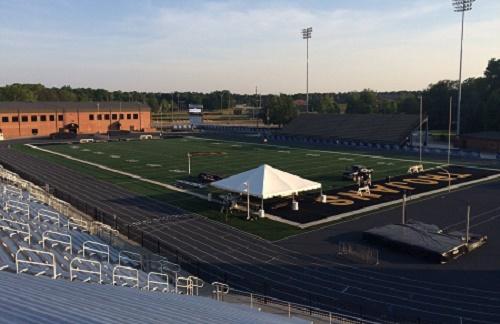 5A is one of the most competitve classes in Georgia following 7A. At the top end, just as competitive with Fayette's boys sheer speed and for the gals, Buford, North Springs and Maynard Jackson's gals with serious speed to burn in the sprints, hurdles and relays. Pictured is Grisham Stadium in Carrollton.
AAAAA Boys
Races to Watch: The best races to watch will be any event with Fayette County in it: 100, 200, 400 and both relays. the 800m has 4 runners in it, with a spread of 1.4 seconds. The showdown in the 1600 between Nick Nyman and Zach Jaeger. The HJ is a must watch with Pache Caldwell of Riverwood having a pr of 7-00. William Jones of Lithia Springs is the top LJ'r in Georgia at 24-10.50. 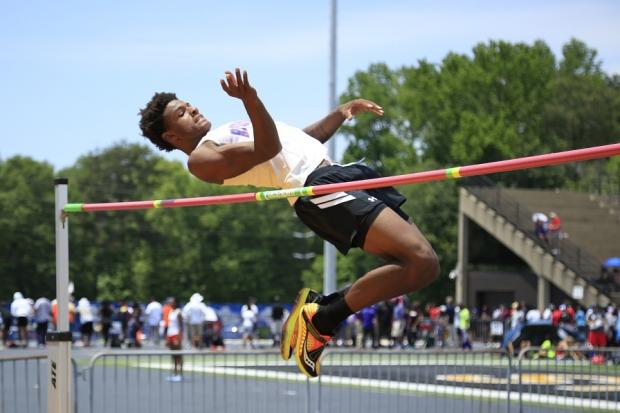 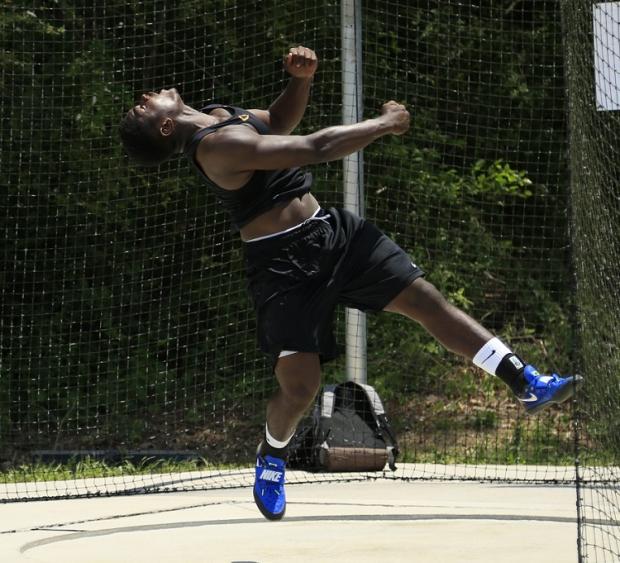 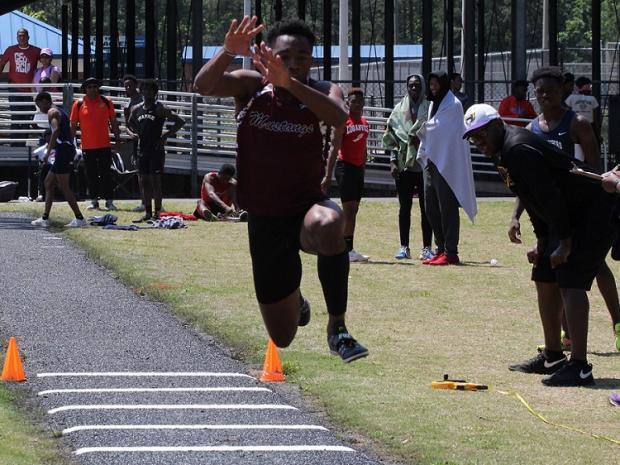 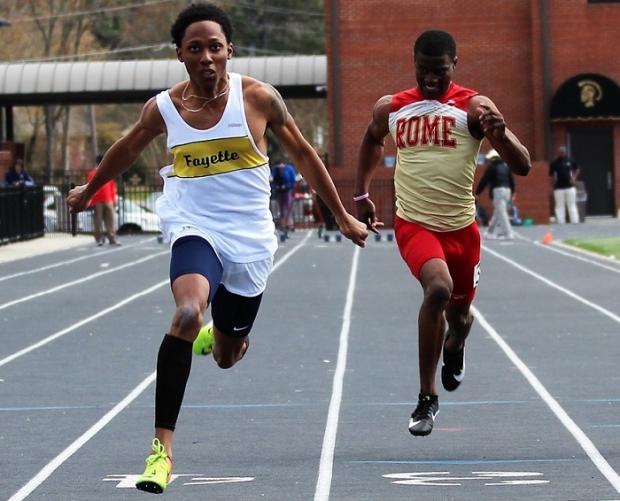 Seth Holloway of Fayette County
Fayette County is the favorite coming in, as the Tigers have displayed great talent in every sprint and both relays. And they need to max out in those events.. as they have literally zero opportunity to score a point in the field, distance and hurdles. 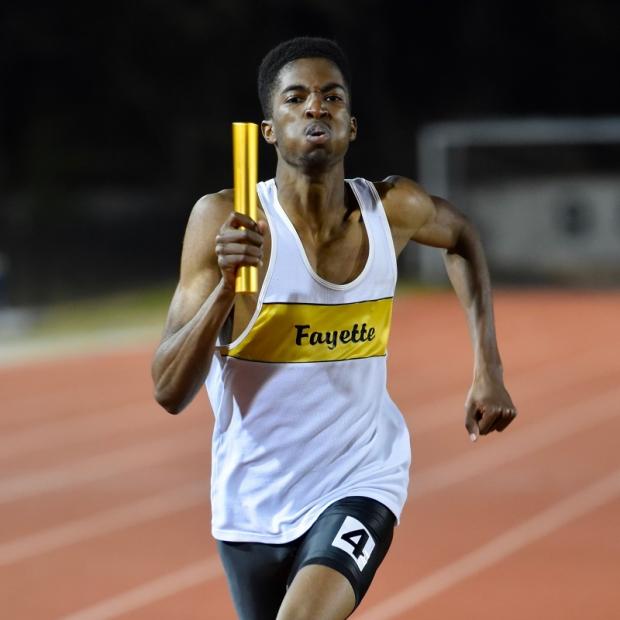 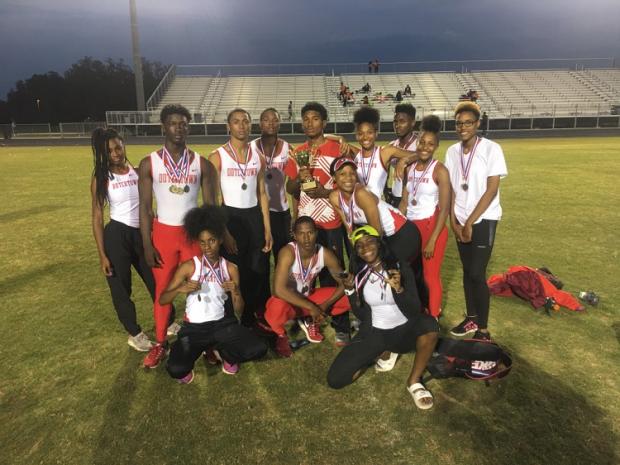 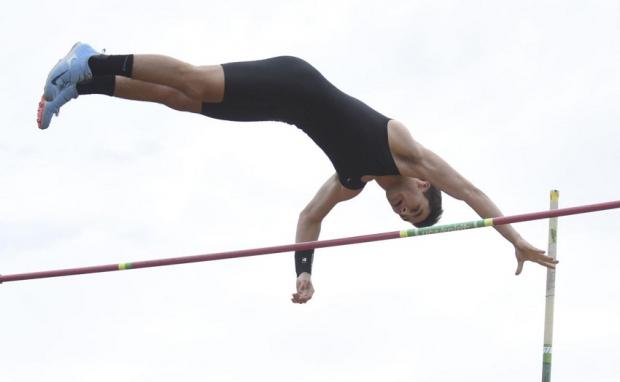 Joe Street of Carrollton
Carrollton is kind of a 'throwback' team like the old Cairo state title teams 44+ years ago, whose strengths were Field events. Jeremiah Pierce is a beast in the Discus and Shot. Joe Street has a bar of 15-0 in the Vault and team mate Drew Taylor cleared 13-0 at Sectionals. The Trojans can pick up some points in the hurdles and sprints. 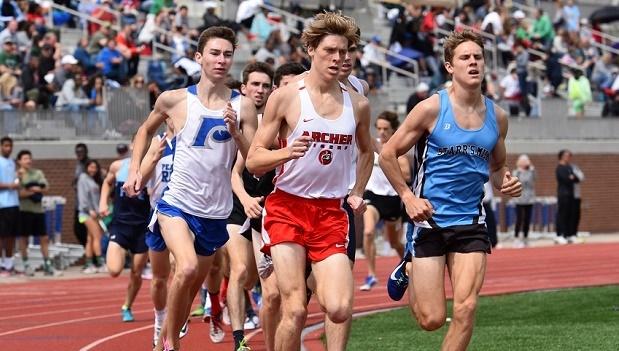 Nick Nyman (r) photo by Daniel McCauley.
Challenging for a team Podium spot will be region rivals Starrs Mill and McIntosh who are both distance heavy. Nick Nyman of Starrs is capable of sweeping the 1600/3200, and Harrison Fultz has the fastest time in the 800m this season and 3rd best in the 1600 and Brandon Rew took 2nd at sectionals in the 300h. McIntosh will feature distance aces Zach Jaeger in the 1600/3200 as well as Vladimir Zander-Velloso.
AAAAA Girls
Races to Watch:

4x100 Relay at Eagle's Landing 5A Sectional
There will be some tight battles between Buford, North Springs and Maynard Jackson in all the speed events, including the 100,200,400, 100h and 300h. The 4x100 relay will be off the chain and the 4x400 features the 2 fastest squads in GA with North Springs having went 3:43.31 at the Fulton County meet. The 1600 will be a fight to the wire with 4 girls having pr's within :03 of each other and the 3200 should be equally interesting. 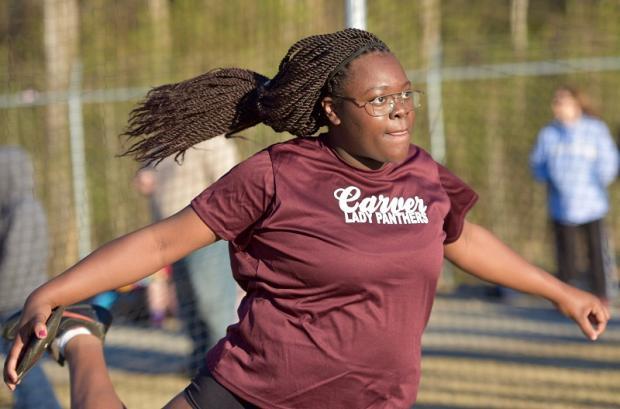 Soteria Russell of Carver Atlanta
On the field, the Shot Put matchup should be a classic. Soteria Russell of Carver ATL has a pr of 44-7.50 and Morgan Johnson of Whitewater is at 44-3. The LJ competition is another hot field event, with 4 gals having a pr' spread of 4.5". Sade James of Griffin owns the best mark at 19-1.50. Fayette County might sweep the top 2 spots in the TJ,  featuring Na'Ilah Moore and Sidney Sims, as both sport pr's of 39+. though Shaianne Sipsey of Veterans took 1st at Sectionals. Payton Phillips of host Carrollton has vaulted 12+ this season.. 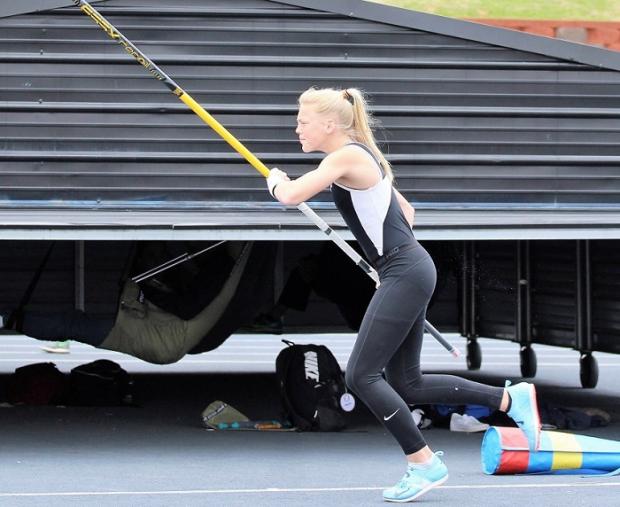 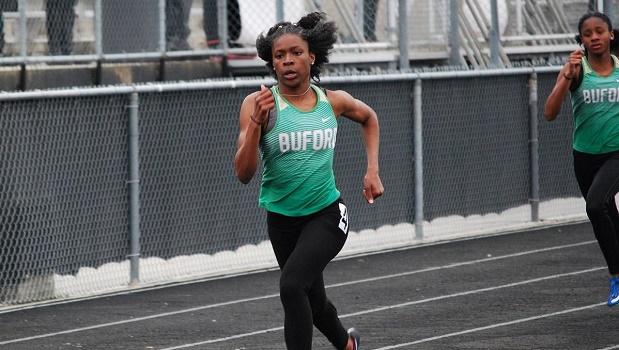 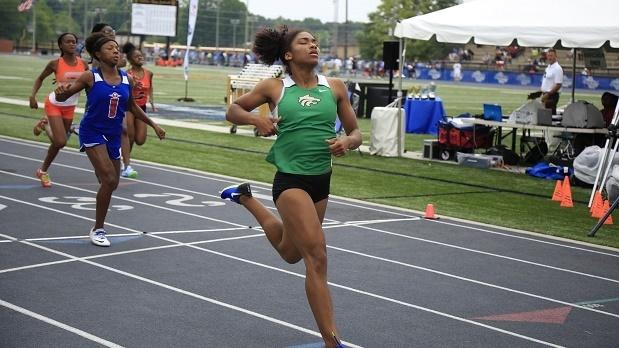 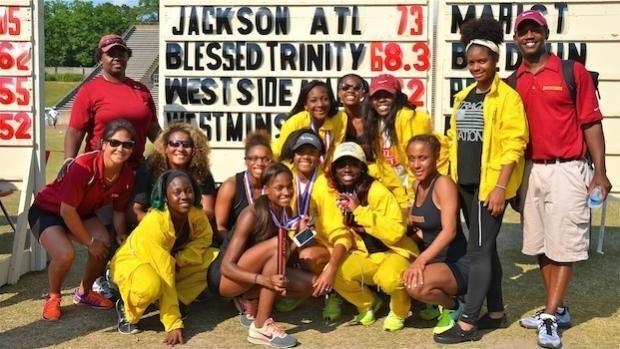 Maynard Jackson 2016 file pic
Maynard Jackson had a great season, and they accomplished that without having a single athlete with a top time or mark. Maynard can pile up the points though, with alot of 2nd, 3rd and 4ths..Their strengths lie in the hurdles, sprints, jumps and relays. Leading athletes for the Lady Jags are: China Waldorf in the 300/100h, Ryah Jackson in the same events, Nykah Smith in the 400/200, and Nyah Benton-Andrews in the 400. Their relay squads could score up to 10+ points as well. 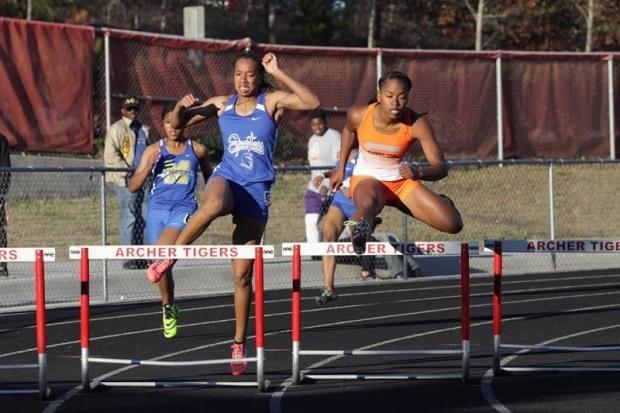 Jayda Drake-Howard (r) of North Springs
North Springs were the 2015 and 2016 state champs in 6A. The going has been tougher down in class, with Buford and Maynard Jackson (2015-2016 3A champs) moving up. Jayda Drake-Howard has been great all 4 years and Carrollton will be her final GHSA rodeo. As always, they are hurdles, relays and sprints strong. Drake-Howard is the favorite to sweep the hurdles events, their 4x400 has the fastest time in GA at 3:43 and change, and in the 4x100 a lock for 2nd. Saran Kouyeth has the #1 200m time in class and 3rd best in the 100m. Kennedi Weston-Shields can score big in the 800. 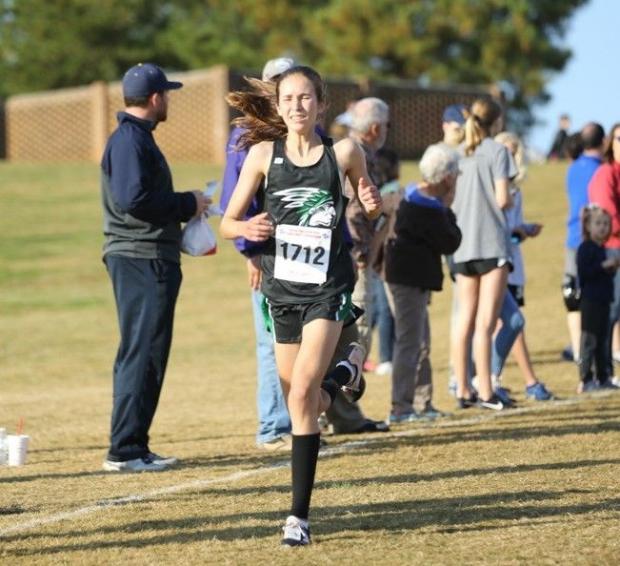 Megan Uszynski of McIntosh
McIntosh girls, exactly like their boys can pile up the points in the 1600 and 3200 and 800. Megan Uszynski is the top distance runner this Spring in the 3200/1600,  Kayla Rose is #2 in the 1600 and 800m events, with Brianna Brown is capable of scoring in the 800 and Hannah Moore in the 3200. Addie Fraker (that last name sound familiar?) is a threat to score in both throws.
Tweets by GAMilesplit