(all photos by Matt Almand)

Augusta Prep from Martinez, won the Boys AAA title, making it a clean sweep for their XC program this season. Depth was the key factor in their victory as the Cavs' top 7 were all in the top 20 finishers. Leading the way early was Collin Bertam who placed 7th overall. Stepping up later was Jack Collier as he worked his way up to 5th Overall going 18:06. Also making the All-State squad was Trey Farmer taking 8th place. 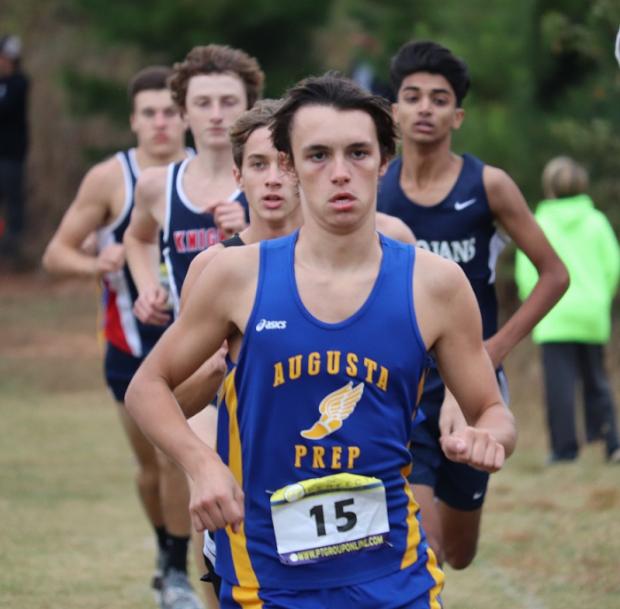 Collin Bertram of Augusta Prep leads a pack of runners early as he took 7th in 18:39. 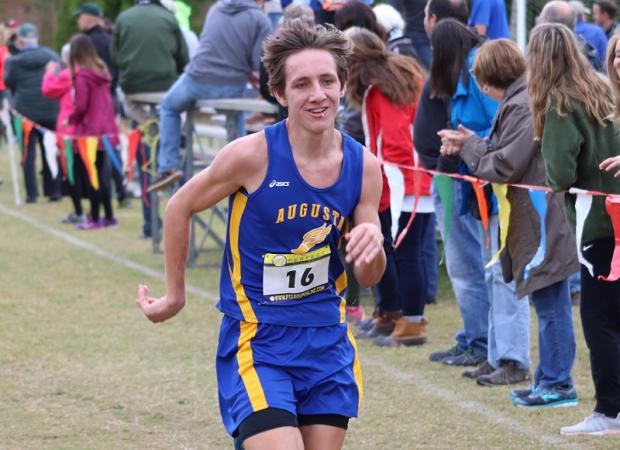 Jack Collier eyes the finish line with a smile, knowing his team mates packed it in behind him. 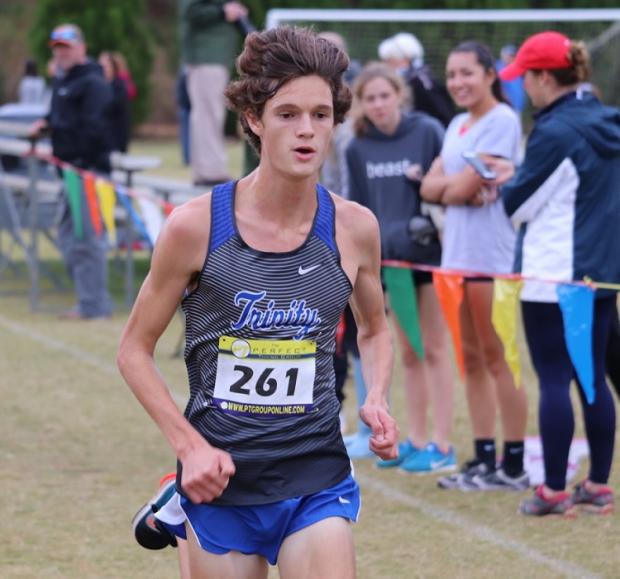 In what was basically a 'tempo run' for Jacob McLeod, leading from the gun, never looking back, earning another Individual title in AAA clocking a 16:20. McLeod's training now will be focused on Foot Locker South, as he will aspire to repeat as a National Finalist and All American. 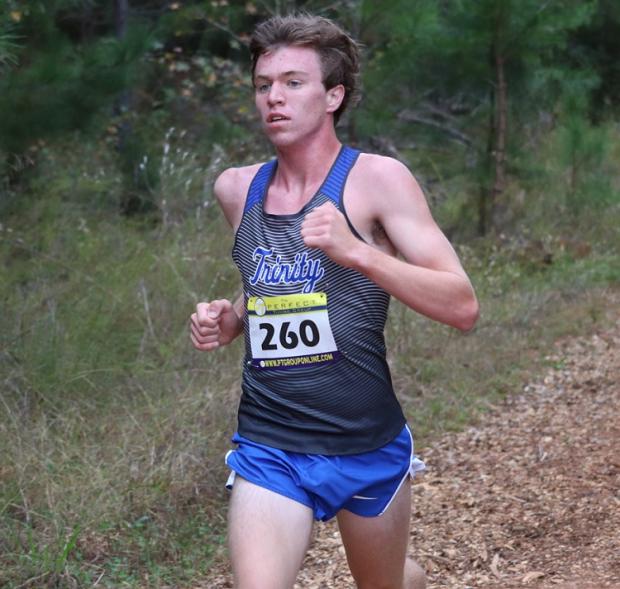 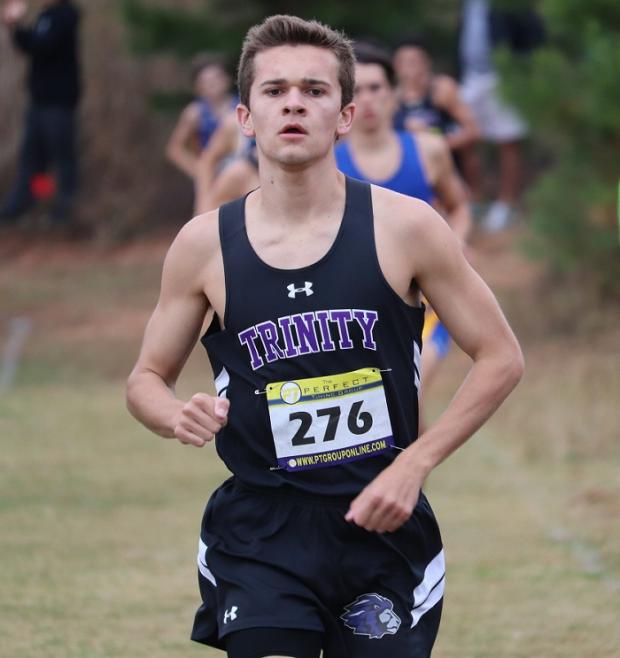 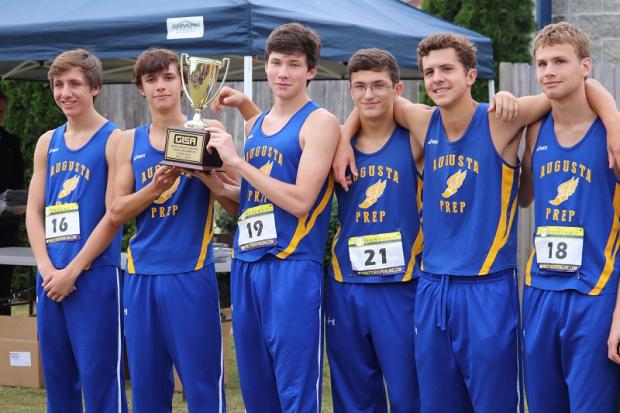 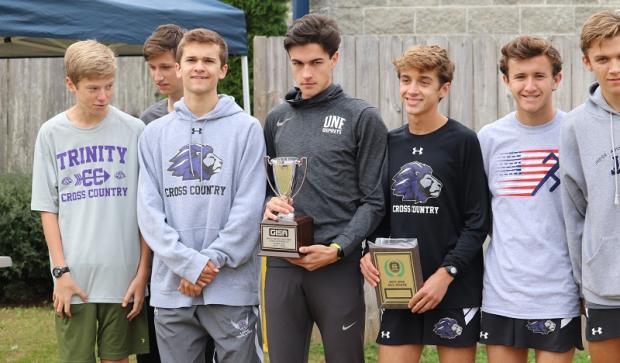 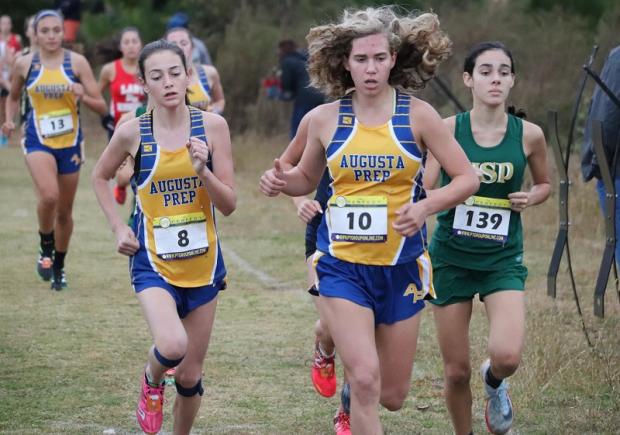 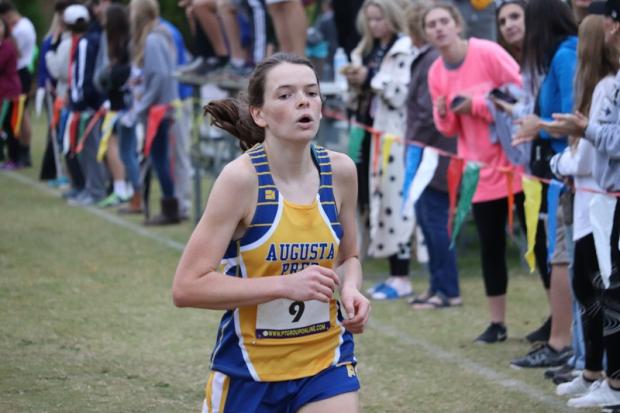 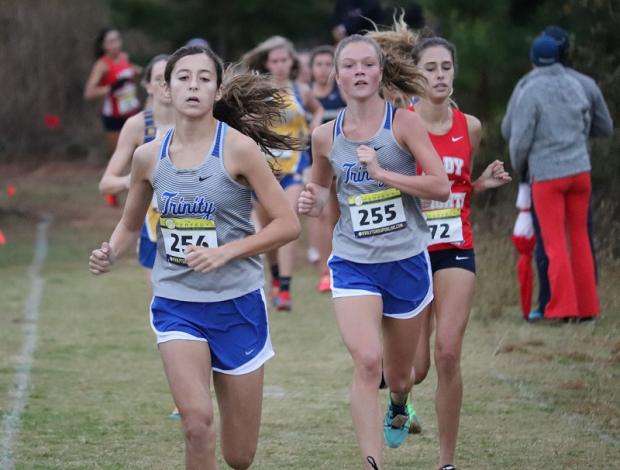 Janie Samson and Karmen LeRoy of Trinity Christian Dublin led the race thru the mile. 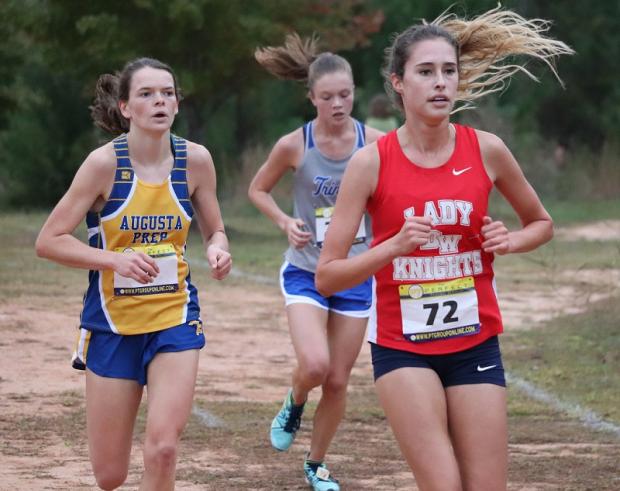 It was a battle for runnerup honors after Samson pulled away.. 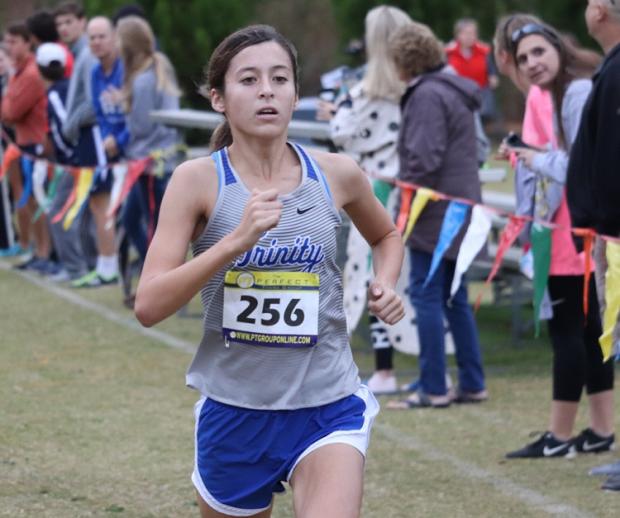 Janie Samson, separated from the chase pack, posting the fastest Gals time of the day in 20:23. 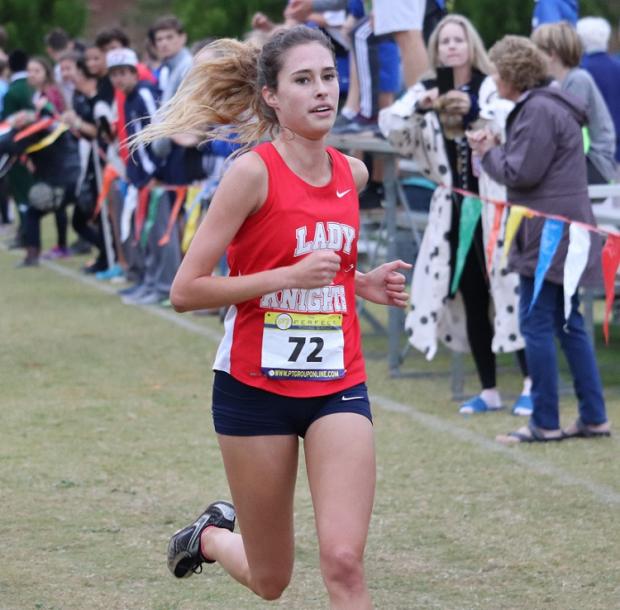 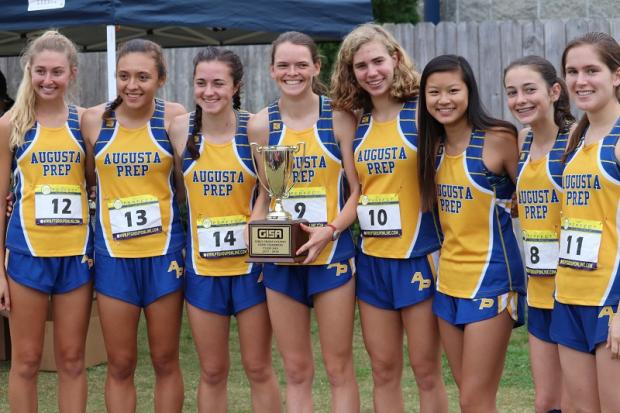 Its hard to lose when your top 5, places in the first 11 team spots, as GISA AAA Girls Champ Augusta Prep did Saturday.

Fugees Academy left no doubt to their superiority in GISA AA, as the other 'Boys of Clarkston' dominated the field, earning their 2nd consecutive GISA AA Boys team title. Most, if not all,  of the team, are also Soccer players, as its the only Sport mentioned on their school website. Fugees took 3 out of 4 of the top places, led by Aseli Adum going wire to wire taking the Overall win in 18:27. Asad Bashir closed the final mile on Aseli taking runnerup honors in 18:32. At 4th was Thadee Barge posting an 18:47. 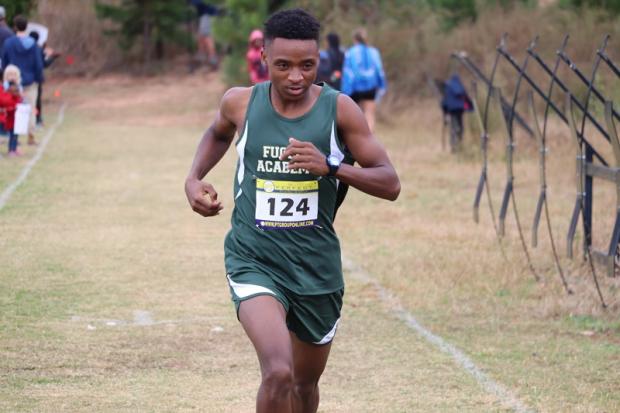 Aseli Adum, took a commanding lead and held on for the Invidual AA title. 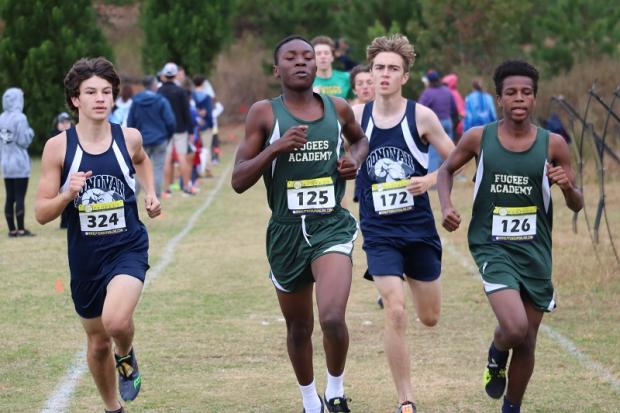 Fugees duo mixes it up early with host Monsignor Donovan. 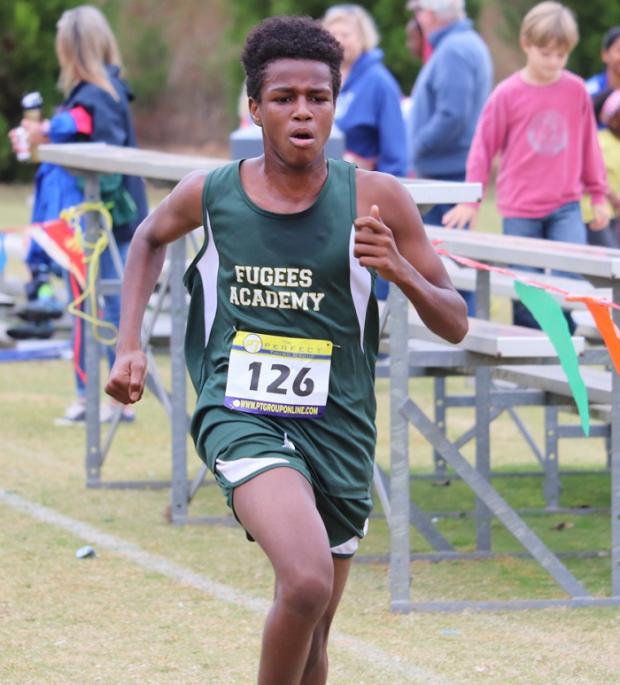 Asad Bashir came on strong the final mile closing in on Adum before running out of trail.. 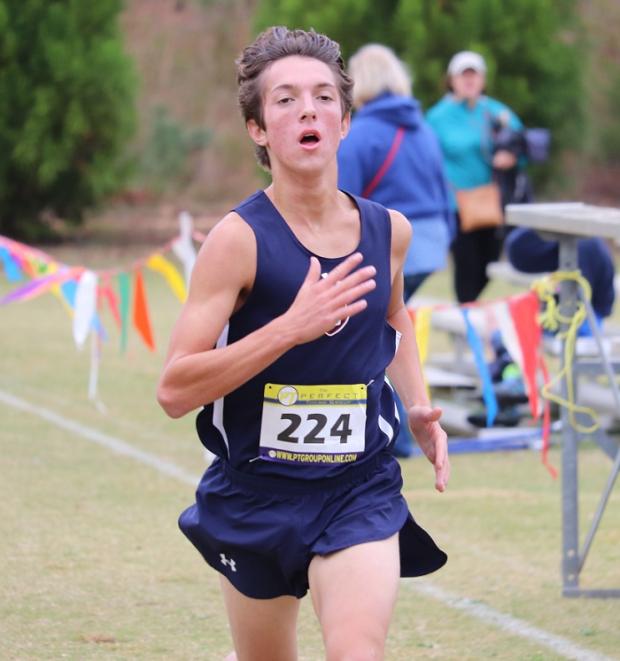 Sam Potter of St. George's Episcopal eyes a 3rd place Individual finish, leading his school to 2nd as a team. 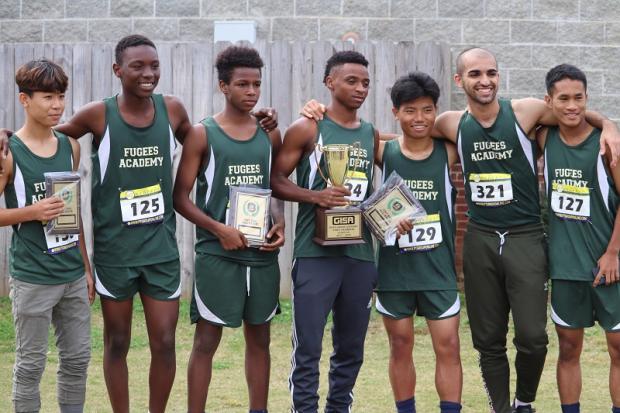 Its Fugees Academy for the win by 40 points taking the AA Boys team title. I wonder if some of these guys train with Clarkston in the off-season... 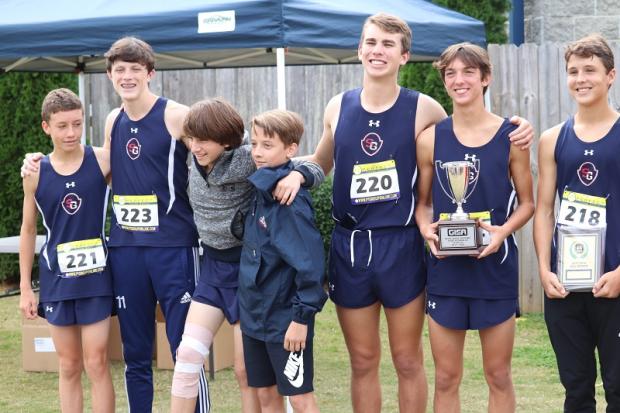 St. George's Episcopal was all smiles after earning 2nd in the Boys AA race.

I may be wrong, but the Fugees Academy Girls team, did not race in the GISA AA meet last Fall.. But,  the gals from Clarkston, did not let that deter their goals,  as they raced to the AA State team title, winning by 22 points over Brentwood (Sandersville). Leading the way for Fugees, was Eman Haji Essa, who was in the chase pack much of the race, placing 6th along with Anuka Gurung adding a 9th place finish. 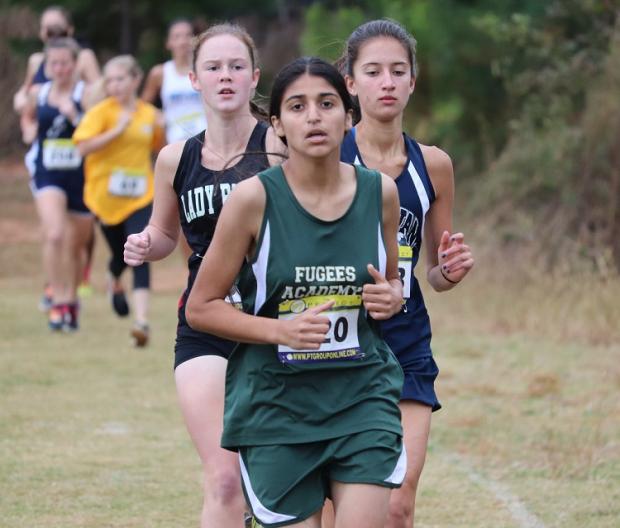 Eman Haji Essa in the chase pack early in the race. 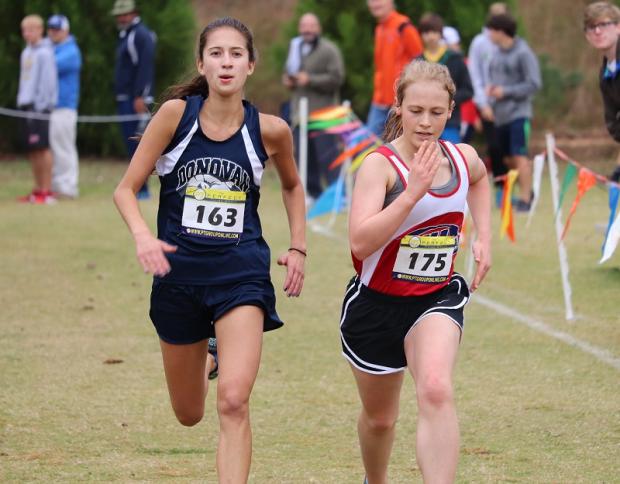 It was an all out sprint to the finish in AA Girls, as (163) Omeka Bhatia of Monsignor Donovan gave the home crowd something to scream about, arriving 1st in 24:07. Anna Bartlett of Oak Mountain was 2nd at 24:09. 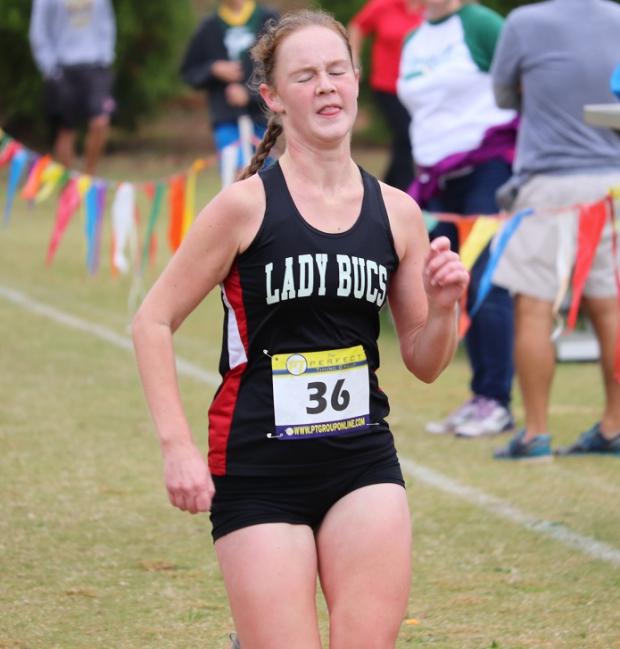 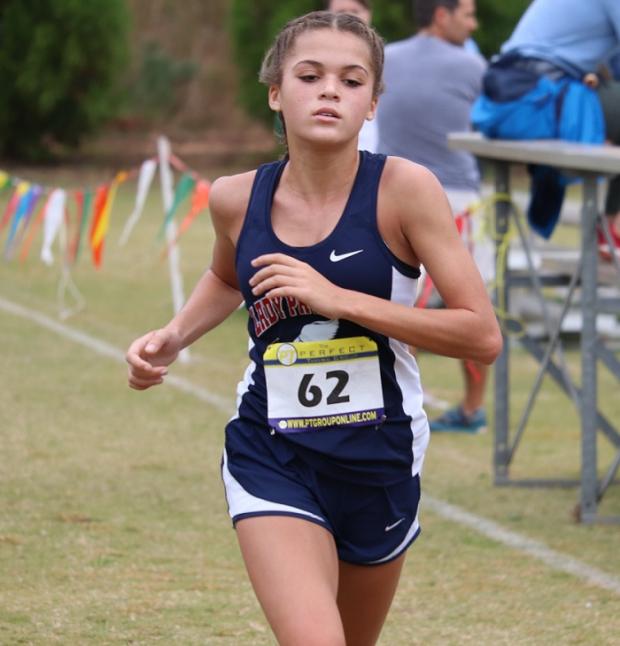 Gabrielle Mann of Citizen's Christian was 4th Overall at 25:07. 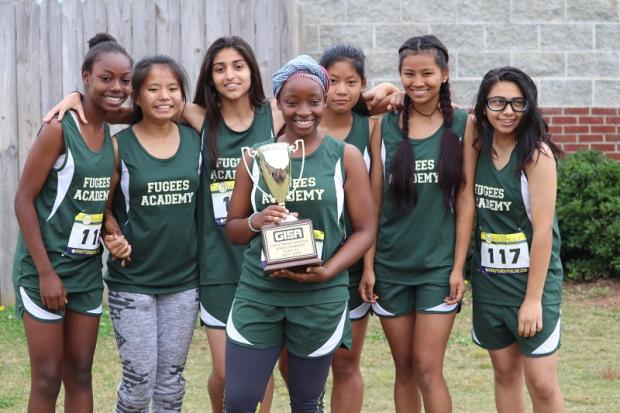 Must be something in the water in 'Clarkston' as Fugees Academy's Girls raced to the GISA AA Girls team title. 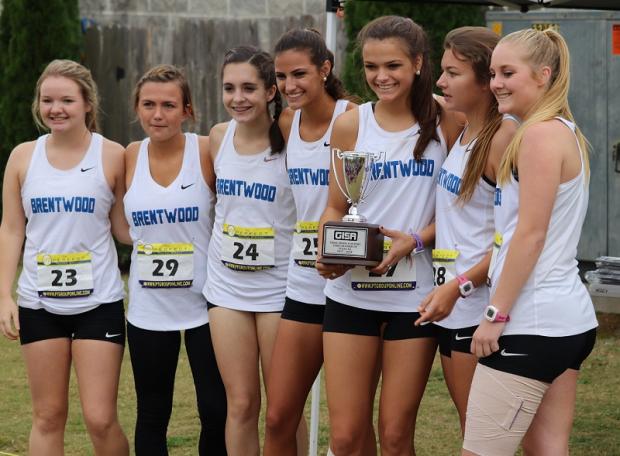