The race for the Single A (Public) title should come down to one of three teams.  Defending Champion Drew Charter, last year's state runner-up Georgia Military College Prep, and new Single A (Public) School Seminole County who dropped down from AA last year.

1.   Drew Charter is the defending champion and returns its entire team from last year's State Championship team.   They will be led by Senior's Isaiah Dubose, and 4 Juniors, Jeremiah Furlow, Henry Cox, Joseph Jones and Roland Blanding.  To retain the title in 2016, each of these runners must improve their overall times.  They won the state title not by having the fastest runner, but by putting their top 5 into the top 14 runners, with a time split of only 1:14 from their fastest scoring runner to their slowest.  That seems to be their recipe for success.

2.   Georgia Military College Prep finished runner-up to Drew Charter at the State Championships with a squad of 6 Freshmen and 1 Sophomore.  Three of the top four runners on the team did not race in the state championships last season, but will this year.  They will be led by Hunter Kimball, who is also the favorite to win the individual title.  He is the only Senior on the team.  Juniors Kaylon Farley, TJ Johnson and Aaron Kirkland will be joined by Sophomore's Taylor Sherwood, Ethan Yopp and Dylan Smith.  Freshmen Jacob Kauzlarich, Ryan Barsby, Carson Waters and Jonathan Bradley make GMC one of the deepest in Single A (Public).

3.   Seminole County joins Single A (Public) from AA in the latest reclassification move by GHSA.  They will be led by Senior Nick Batchelor, Dustin Reynolds, and Lane Odom.  Two sophomore's round out the top 5 with Logan James and Aubrey Johnson.  The biggest challenge they will face is transitioning from the flat races of south Georgia to the very hilly course that is Carrollton.

5.  Towns County round out the top 5.  They will be led by Senior Tyler Grimsley.  The gap between Grimsley and the rest of the team is quite a bit and runners 2-5 will need to see a significant improvement to challenge for a podium place in Carrolton. 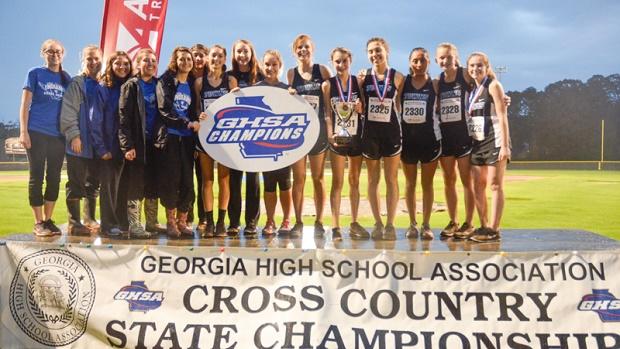 The race for the Single A (Public) title should be defending champion Towns County's to loose.  Atlanta Classical Academy might make a run at Towns County.  If Pataula Charter could find runners 4-5, they could make a very strong team

1.  Towns County is the defending state champion and should win again.  Junior Hannah Whitehead won the individual state title with team mate Taylor Cornett right behind her in 2nd place.  Tara Lee Arrowwood place 6th to lead the squad to a dominating race.  With their entire scoring 5 returning from last year, Jasmine Miranda and Emma Kate Ledford rounded out the 5, all within the top 18, they are primed for a repeat performance.

2.  Atlanta Classical Academy is the 2nd strongest team led by sophomore's  Sarah Katherine Baxter Virginia Bynum and Saria Stephens.  To challenge Towns, Hannah Pearl, Elizabeth Becher and Jeanne Werner need to improve their times.  It will be interesting to see how ACA, with now sophomore's as well as freshmen is able to improve.

4.  Commerce finished runner up last year to Towns County in the state championship, after defeating them in the Area championship.  Kate Massey leads the way and looks to improve on her 4th place individual finish at the State Championships.  Five of the top six runners return from last year's team.  If the ladies put the time and effort this summer, a podium finish in Carrolton is possible.

5.  Trion who finished 4th at the State Championships will push for the podium this year led by Savanna Landry who will be a sophomore this year.  Senior Mekenzie Parker and sophomore Jessie Human form a strong 1-3.  If 4-7 can improve a podium finish is not out of the realm of possibility.